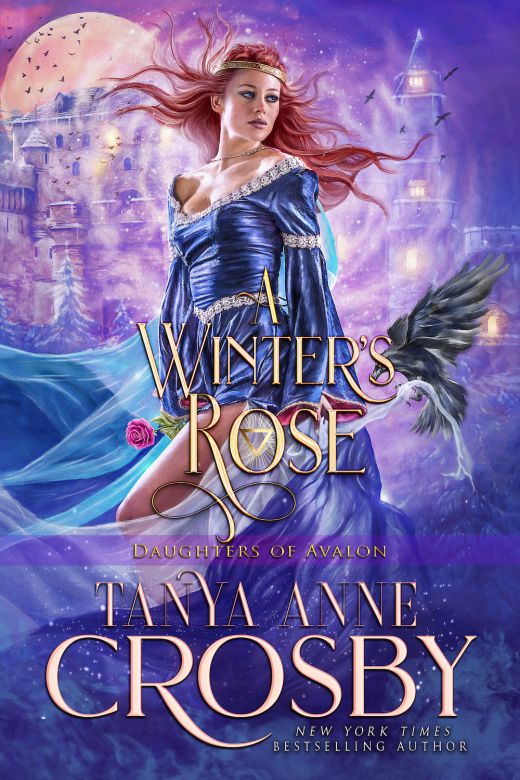 Facing the grim prospect of a forced marriage to a feckless minion of King Stephen's, Rosalynde, the defiant youngest daughter of Morwen Pendragon takes matters into her own hands. With the help of her mother's spell book and a stolen wimple, she disguises herself as a plain, matronly nun and flees her loveless fate... Giles de Vere, lord of Warkworth, is facing his own arranged marriage--to Rose's sister, the reclusive Seren, reputed to be the loveliest woman in all of Wales. But destiny has its own wayward plans, and when the bold knight finds himself a reluctant champion to a runaway nun, he hasn't any clue of the lady's true identity. All he knows is that while Rose is far from beautiful, there's something magical about her that speaks to his heart... 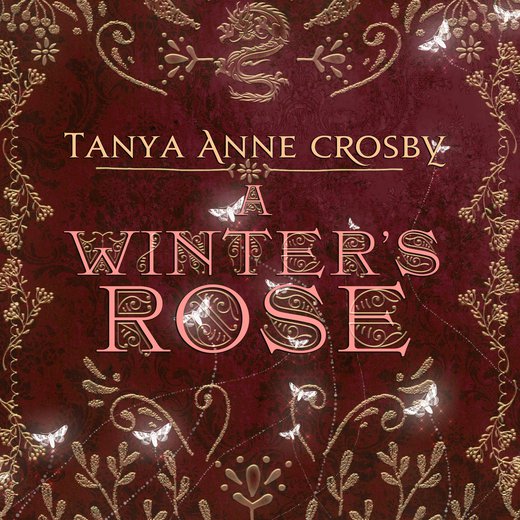 “Destiny is what I make it.”

Returning from assignment in the wee hours of the morn, Wilhelm of Warkworth reined in his mount, motioning for his companions to do the same.

The southern woods were dense with mist, and, at first glance it would appear a heavy fog had crept up from the shore, thick as usual on a balmy morning, but the taste on his lips was not salt, but ash, and the odor that flared his nostrils recalled him to the stench of greasy pork blistering on a spit.

A sense of premonition shook him as he and his men leapt down from their mounts and ventured silently forward, emerging from the woodlands to a landscape painted black.

Summer was gone; so was every trace of green that heralded that season. But the eerie silence and coal-black fields were not natural. Neither was the absence of leaf-litter, broom and mulch. In the distance, smoke curled upward from twisted piles of embers, filling the air with a stench that permeated everything it touched.

The devastation was staggering. Every alder, ash and elm within range of the castle had burnt to nubs, some still nurturing flames. The castle on the motte had been a temporary measure, constructed mostly of pinewood and spruce, making use of the area’s most prominent woods. Sparing only the outbuildings surrounding it, the edifice was consumed.

Only six months ago, they’d begun construction on a new stone wall to replace the wood palisade; now that was all that remained. And, if there was life to be found within a hundred yards of the motte, it wasn’t immediately evident. It was only after the trio ascended the hillock and Wilhelm picked his way through simmering ruins that he spied movement inside the bailey. Survivors lifted ash-covered faces as he approached, pausing from their searches to reveal eyes that were red-rimmed from tears and smoke. But it was the cook he happened upon first. Bearing a carcass atop his bent shoulders, he came marching out of the ruins.

“They came like thieves in the night,” said the old man.

“The Count of Mortain with his Welsh witch.”

Terror shook Wilhelm to his bones. “My fa—Lord de Vere? Where is he?”

The elder man lifted a bony shoulder, peering back into the destruction in a gesture that sank Wilhelm’s soul. He turned again, and the old man’s dirty lips quivered as he hoisted down his burden, laying the ravaged young woman down amidst a growing pile of dead. He straightened the woman’s twisted body, then smoothed her half-charred dress. “I found her in the motte,” he said.

He recognized her only by the silver cross she wore—a cross he, himself, had given her as a consolation when Giles de Vere left for the seminary—not that Wilhelm would ever dare covet the lady for himself. He simply hadn’t liked to see her pining so long over Giles. He’d hoped the cross would give her comfort. Now, the horror of her condition brought a lump of bile to the back of his throat. Her once lovely face was covered with ash, half peeling away. At the grisly sight, some unnamed emotion overtook him, and he felt like ripping the cross from her neck. But he did not. Hardening his heart and ordering his companions to help, he abandoned his horse where it stood and marched into the ruins himself, reassured that no one would dare relieve Lady Ayleth of her valuables. At six-feet-five and weighing more than sixteen stone, Wilhelm Fitz Richard, bastard son of Richard de Vere, and Hammer of Warkworth, was no man to be trifled with—particularly not today, when everything he’d held so dear had been wrenched from his life.

The scent of death rose with the morning sun, the odor of decay growing thick with the humidity, until the stench was caked into every fiber of his being. Alas, as the day wore on, he continued to drag out bodies, putting them aside to be given a proper burial. Skin charred and sliding off bones, it gave him a heave to the belly every time he hauled out another, but he was duty bound to persevere—at least until he found his lord sire and brother. And then, though sadness might have easily consumed his resolve, he felt the burden of responsibility. At forty, he had been the youngest of his father’s sons, save for Giles, and in one fell swoop, he’d become the eldest, with two half-sisters gone, and an older brother as well.

Roger de Vere had been the pride of his father’s heart. Now, the firstborn son of Warkworth lay desecrated beside their lord father, and it fell to Wilhelm to look after Giles—St. Giles, they’d called him, not because he was a saint, but because, as a boy, Giles de Vere was more in love with his books than he was with his steel. Unlike Roger, Giles had never aspired to lead Warkworth’s armies, nor did he concern himself with carrying on his sire’s name. But he was the only one who could. Neither Wilhelm nor his progeny could inherit these lands, nor did he bear the lord’s name. His mother had been a lowly servant—well-loved after the death of de Vere’s first wife. His second wife—bless her soul—lived but long enough to give birth to Giles. And the third… here she lay.

Wilhelm dropped his mistress’s fragile arms, wondering how her Scots-loving sire would fare with news of her death. Their youngest daughter—younger than de Vere’s youngest child—was good and dead. Arms akimbo, he glared down at the lady’s body, scarcely recognizable in its wasted state, but suddenly, he spied the gleam of silver clinging to her charred finger and he bent to retrieve the sigil—a lion sejant holding in his dexter-paw an axe, and in the sinister, a tilting-spear. It was a perfect match to his father’s, a smaller, more delicate version of the lord’s ring. Both now belonged to Giles—the weedy brother he hadn’t seen in years and who’d broken Lady Ayleth’s heart.

Examining the ring—a sigil that would never belong to Lady Ayleth—he stood considering the brother who’d never loved her and felt a prickle of envy… and… a needling sensation at the back of his neck, almost as though someone could be watching… and then laughter. Hideous laughter. Distant and spine-chilling, the sound clearly mocked him.

You will never inherit, because you are unworthy… from dust you were born, to dust you will return… forgotten.

Closing his fist about the silver and gold bejeweled sigil, Wilhelm’s dark eyes studied the landscape—the still smoking fields, the distant glitter of the ocean…

There was nothing out there… nothing… and yet, as the ring cut into the tender flesh of his soot-stained palm, he still heard it… the tittering of fate for a man who’d dared to love where he should not…

“What is it?” asked Edmond, who’d ridden back with him from Reading and then worked tirelessly beside him all night long.

“’Tis naught,” Wilhelm said, shaking it off, attributing the gloom to his grief. And still, he felt a hovering darkness that unsettled him to his bones. “I would have you ride for a priest,” he said. “St. Giles must be told, but I cannot scribe the letter myself.”

The glow of the raging fire must have lit the night sky for leagues, and yet, no more than six leagues away, the lord of Bamburgh had never bothered to dispatch men to their aid—not even for the sake of his daughter.

“He’ll come,” said Wilhelm. “If only to shrive his daughter. ’Tis Lady Margaret who lies at my feet.”

Both men peered down at the fire-wasted body, and when Edmond lifted his gaze, Wilhelm nodded, opening his fist to reveal her sigil ring. “All accounted for now,” he said. “Lucy, Alice, Roger, my Lord de Vere, and…” He looked down at the barely recognizable corpse, giving it a nod. “…Lady Margaret. No one has survived.”

For all the hope his father bore, Warkworth was now without a lord. Even if the Church agreed to dispense Giles, there was no guarantee King Stephen would give him the seat, not if his father had been declared an enemy to the crown.

Edmond scratched his head, averting his gaze, looking as though he might weep and perhaps, he would, because his thoughts had clearly ventured in the same vein Wilhelm’s had: They were lost without a lord. Edmond returned his watery gaze to Wilhelm, and said, “Well… we still have Giles, right?”

There was little wonder it was phrased as a question. Despite that this was now Giles de Vere’s birthright, he might not agree to leave his Church, not for a pile of rubble and bones.

“Go on… fetch the priest,” Wilhelm said, with no small measure of disgust. “Then, while you’re at it, get on your knees and pray to God Giles has what it takes to see our lord avenged.”

Only after Edmond was gone did he mutter for his ears alone, “If he does not, I will.” And he glared at the motto on the lady’s ring. It read: virtute duce comite fortuna—led by virtue, with great fortune.

It was their family dictum.