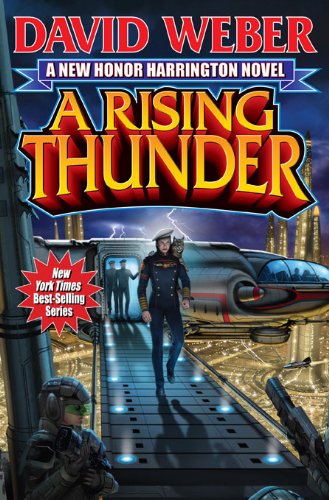 Peril and strife strike on a double front for Honor Harrington and company. After a brutal attack on the Manticoran home system, Honor Harrington has rooted out a plan designed to enslave the entire human species. Behind that plan lies the shadowy organization known as the Mesan Alignment. Task number one for Honor is to shut down and secure the wormhole network that is the source of the Star Kingdom's wealth and power—but also its greatest vulnerability. Yet this is an act that the ancient and corrupt Earth-based Solarian League inevitably takes as a declaration of war. The thunder of battle rolls as the Solarian League directs its massive power against the Star Kingdom. And once again, Honor Harrington is thrust into a desperate battle that she must win if she is to survive to take the fight to the real enemy of galactic freedom—the insidious puppetmasters of war who lurk behind the Mesan Alignment! At the publisher's request, this title is sold without DRM (Digital Rights Management). A lifetime military history buff, David Weber has carried his interest in history into his fiction.  In the New York Times best selling Honor Harrington series, the spirit of both C.S. Forester's Horatio Hornblower and history's Admiral Nelson are evident.  With over five million copies of his books in print, David Weber is the fastest rising star in the Science Fiction universe.  His Honor Harrington series boasts over 3 million copies in print, and Weber has had over thirteen of his titles on The New York Times Best Seller List. War of Honor, book 10 in the series appeared on over twelve Best Seller lists, including The Wall Street Journal, The New York Times, and USA TODAY. While he is best known for his spirited, modern-minded space operas, he has also developed a fantasy series, of which two books have been published: Oath of Swords and The War God's Own.  David's solo work also includes three novels of the "Dahak" series, and the stand alone novels: Path of the Fury and The Excalibur Alternative. Weber's first published novels grew out of his work as a war game designer for the Task Force game Starfire.  With collaborator Steve White, Weber has written four novels set in that universe: Insurrection, Crusade, In Death Ground, and The Shiva Option. Recent bestsellers in planetary adventures also include the teamwork of John Ringo in the best selling Empire of Man series where the titles March Upcountry, March to the Sea, March to the Stars and We Few have made appearances on The New York Times List. Weber's proliferation continues with author Eric Flint, where they joined forces in the Best Selling "Ring of Fire" alternate history series, for 1634: The Baltic War, coming in May. A popular guest at science fiction conventions, Weber makes his home in South Carolina with his wife Sharon, three children and a passel of dogs.