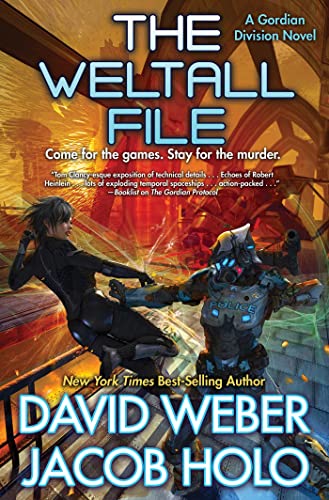 Come for the games. Stay for the murder. A mystery in the Gordian Division universe.

The Weltall Tournament’s professional VR games were supposed to be a symbol of cooperation between SysGov and its militaristic neighbor, the Admin. But that was before star Admin player Elly Sako received a death threat, written in blood next to a copy of her own severed head. The Admin’s Department of Temporal Investigation swiftly seizes control of the crime scene, and the tournament transforms into a flashpoint of charged politics and conflicting jurisdictions.

SysPol Detective Isaac Cho and DTI Special Agent Susan Cantrell—partners in the officer exchange program—are sent in to take charge of the investigation and bring the situation under control. But solving this mystery won’t be easy, and the pair struggles to determine who is telling the truth. A jilted relationship between players soon explodes into signs of a far-reaching conspiracy, and the two detectives find themselves racing against time before the tournament ends.

Because the killer will be the only one who wins, should they fail.

About The Janus File:

“A satisfying, self-contained mystery for its mismatched protagonists to gradually unravel…moments of humor amid the expected culture clashes, and the exploration of the authors’ well-realized far-future world…It’s pure entertainment.”—Publishers Weekly

About prequel The Gordian Protocol:

“[A] fun and thrilling standalone from Weber and Holo. . . . Time travel enthusiasts will enjoy the moral dilemmas, nonstop action, and crisp writing.”—Publishers Weekly

About David Weber:
“[A] balanced mix of interstellar intrigue, counterespionage, and epic fleet action . . . with all the hard- and software details and tactical proficiency that Weber delivers like no one else; along with a large cast of well-developed, believable characters, giving each clash of fleets emotional weight.”—Booklist

“[M]oves . . . as inexorably as the Star Kingdom’s Grand Fleet, commanded by series protagonist Honor Harrington. . . . Weber is the Tom Clancy of science fiction. . . . His fans will relish this latest installment. . . .”—Publishers Weekly

“This entry is just as exciting as Weber’s initial offering. . . . The result is a fast-paced and action-packed story that follows [our characters] as they move from reaction to command of the situation. Weber builds Shadow of Freedom to an exciting and unexpected climax.”—The Galveston County Daily News

“Weber combines realistic, engaging characters with intelligent technological projection and a deep understanding of military bureaucracy in this long-awaited Honor Harrington novel . . . . Fans of this venerable space opera will rejoice to see Honor back in action.”—Publishers Weekly

“This latest Honor Harrington novel brings the saga to another crucial turning point. . . . Readers may feel confident that they will be Honored many more times and enjoy it every time.”—Booklist

“An entertaining sci-fi action novel with light overtones of dystopian and political thrillers.”—Kirkus on The Dragons of Jupiter