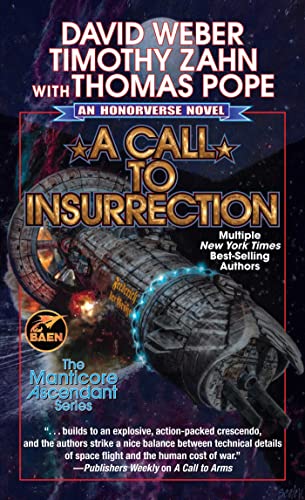 Yesterday, the Star Kingdom of Manticore was a small, unimportant interstellar backwater. A quiet little star nation, only recently recovered from the devastating blow of the Plague Years. More affluent than some, perhaps, but with little to attract trade or interstellar commerce, it had little need for a navy . . . and even less interest in paying for one.

But Manticore has now become a target. The Star Kingdom isn't certain who is attacking it, or why, or what its mysterious foe can possibly want, but Queen Elizabeth I knows she has to find out. And she knows that whatever some of her subjects think, Manticore does need a navy. And it needs allies, friends like the dynamic Republic of Haven and the Andermani Empire. It needs their trade . . . and to learn from their more experienced and powerful navies.

It is the job of officers like Travis Long and his wife, Lisa, to acquire that experience. Of utterly inexperienced diplomats like Travis's brother Gavin, Earl Winterfall, to build those alliances.

The Manticoran visitors find themselves squarely in the path of the storm, and before Travis, Lisa, and Gavin can accomplish anything else, they first have to survive.

About A Call to Arms:
“The plotting is as solid as ever, with smaller scenes building to an explosive, action-packed crescendo, and the authors strike a nice balance between technical details of space flight and the human cost of war.”—Publishers Weekly

Praise for prequel A Call to Duty:
“This exciting book marks the first collaboration of two powerhouses . . . fans of both writers should be quite pleased with the result. Like Robert A. Heinlein and Orson Scott Card, Weber and Zahn are telling a story about a teenage character but writing for readers of all ages.”—Booklist

“A new series set in the universe of Weber's popular heroine Honor Harrington gets off to a solid start. . . . Cowriters Zahn and Weber do an excellent job alluding to events known to longtime fans. . . . [T]his astronautical adventure is filled with . . . intrigue and political drama.”—Publishers Weekly

About the Honor Harrington series:
“Weber combines realistic, engaging characters with intelligent technological projection and a deep understanding of military bureaucracy in this long-awaited Honor Harrington novel . . . Fans of this venerable space opera will rejoice to see Honor back in action.”—Publishers Weekly

“[Y]ou can count on Timothy Zahn for three things: clean, sparse prose; good pacing; and great action scenes. The first book in the Cobra War series hits all those marks in admirable style and makes for a quick, entertaining sci-fi novel.” —Blogcritics

“[Conqueror’s Heritage] is another finely wrought space adventure . . . [with] social, political and emotional complications, all of which Zahn treats with his usual skill.”—Booklist