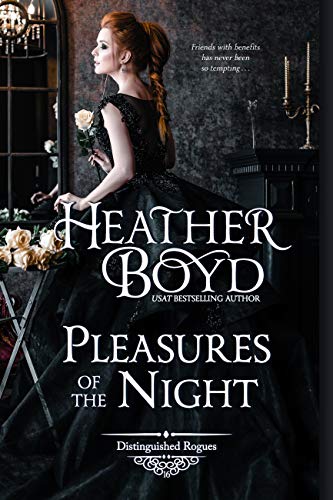 Pleasures of the Night

Teddy Berringer has reconciled himself to a future of great riches, but also unceasing responsibility as the Duke of Exeter's only heir. Speculation that he's hunting for a bride is rife...but couldn't be further from the truth. All he wants for this season is to have a little fun while he's still a carefree bachelor.

Eugenia Hillcrest has joined society alongside her cousins, one of whom is engaged to a marquess. For the most part, she's placed alongside disinterested bachelors at an endless parade of dinners, all while yearning for a kindred spirit who doesn't believe that every spinster expects a marriage proposal with each stolen kiss.

When another gathering puts Eugenia in the company of the very eligible Mr. Berringer, talking leads to flirting...which culminates in a passionate embrace that leaves them both reeling. They may have continued their thrilling dalliance...if only Eugenia's long-buried past hadn't followed her to London, expecting a second chance.