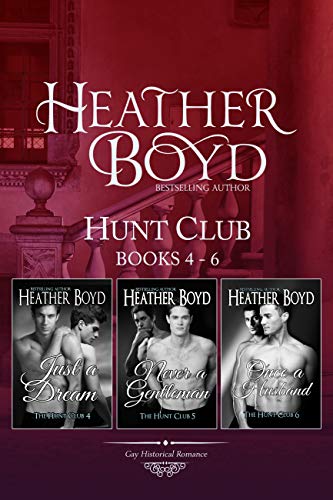 Just a Dream: On the surface, Raphael and James have everything they need until James' upcoming birthday forces both to reassess what James' well-ordered, respectable life lacks most—forbidden passion. Can James follow through with his well-reasoned, sensible decision when a man who knows what he wants, needs him too?

Never a Gentleman: Victor Knight has never been able to juggle his work and love life to anyone's satisfaction. When an evening at the Hunt Club ends in blistering sex with the Earl of Beecroft, Victor welcomes the distraction from the problems afflicting his business until his lover appears entwined in them.

Once a Husband: Angelo Marinari limped away from his life gravely wounded once but when fate lands the love of his life at his feet again—bloody and beaten and breathtakingly defiant—is he strong enough to abandon Lord Bracknell twice when he and his son are in grave danger?