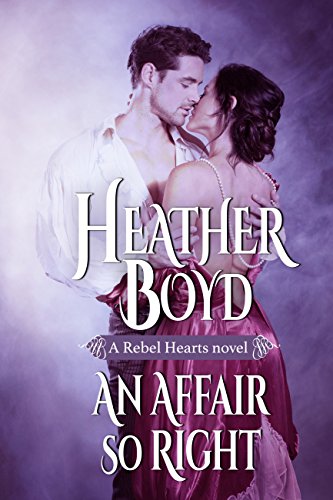 An Affair so Right

Falling in love is the worst complication...

When a fire destroys her home, Theodora Dalton loses not only her every last possession, but her beloved father as well. Her nearest neighbor, Quinn Ford, graciously offers temporary lodgings to Theodora and her mother, but if she's going to see them on their feet sooner than later, she'll need employment. To that end, she convinces the viscount to employ her as his secretary. In her new position, she can manage Quinn's disastrously unorganized affairs—while also attempting to prove her father's death was more than mere accident. She has only to avoid the incredibly irresistible distraction that is the viscount himself.

Quinn, Viscount Maitland, has paternal troubles of a different sort. The Earl of Templeton has forever attempted to use Quinn for his own gain, but just when he believes his father can sink no lower, he deals Quinn the ultimate betrayal, sending him into a tailspin—and straight into the pleasurable arms of his new secretary. Theodora is efficient, smart and lovely...and the more his fondness for her grows, the more she seems determined to keep their affair strictly about business and mutual pleasure, with no hint of permanence. It will take some maternal meddling and an act of vengeance for Theodora to see the potential in a lasting merger...hopefully before it's too late.

Rebel Hearts Series:
Book 1: The Wedding Affair (Felix and Sally)
Book 2: An Affair of Honor (William and Matilda)
Book 3: The Christmas Affair (Harper and Amy)
Book 4: An Affair so Right (Quinn and Theodora)