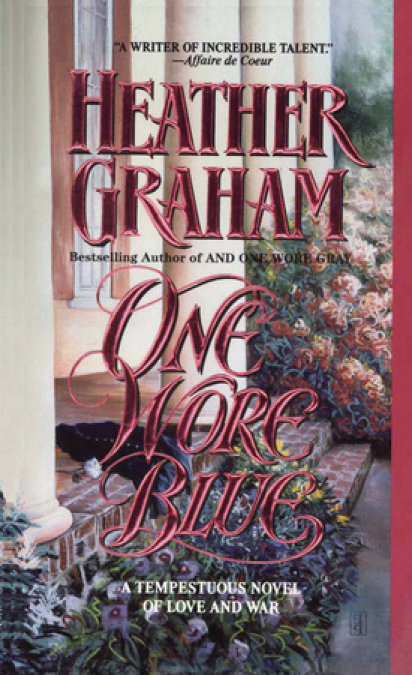 Heather Graham’s seductive Civil War trilogy begins with an unlikely Yankee forced to choose between loyalty to the cause and the love of a Southern belle.

The privileged daughter of a Virginia plantation owner, Kiernan Miller can’t imagine that her idyllic life will ever change—nor her days in the company of her devastatingly handsome neighbor, Jesse Cameron, a boy who returns her desire, kiss by tempestuous kiss. Then Jesse commits the one sin that Kiernan can never forgive: He abandons his roots for the Union army. Though Kiernan marries another, a part of her will always love the rebel in blue.

To follow his conscience, Jesse Cameron must sacrifice his heart. He deserts his hometown, turns against his own brother, and rides away from the woman he loves. But he vows that it will not be forever. Now, bringing the war to Kiernan’s front door, Jesse has returned as the enemy, intent on winning back the widow with emerald eyes and sun-kissed hair—the beauty who has branded him a traitor.

Kiernan’s world, it seemed, had split in two.

Ever since it began to come apart, everything had changed. All that had been beautiful in life had begun to fade. A way of life that had been full of charm and wit and easy grandeur had passed away. They were holding on to it tightly, but it was gone. The world was split apart, and families were split apart—like Camerons.

One wore blue, and one wore gray.

One had been her childhood friend back in Tidewater Virginia. He and Kiernan had tramped through fields together, they had been chastised together. They had told their dreams to each other during long lazy days when they had lain by pleasant, bubbling springs beneath powder-blue skies.

It was just that she had loved him so long.…

Even when she had stood before the altar with another man and promised to love and honor and cherish that man until death did them part, she had loved him.

Almost as much as she had hated him.

She had told him that she hated him the day that she walked away from him.

But he had been destined to ride back into her life that day, Kiernan would later realize.

The one who wore blue.

It began very late in the afternoon of that autumn day in 1861, when the breeze was cool, when the mountains seemed the most gentle.

They came against the beautiful fall colors of the twilight. They were like a great wave, cresting and falling, rising again. Beneath the dying sun they seemed to weave and undulate. A piece of metal—a belt buckle, a sword—would catch a ray of the fading light, and it would flash and shimmer. They came onward still, visible almost like a writhing snake one moment, then disappearing into shadow the next. When they disappeared, the peace, the tranquillity of the coming night in the Blue Ridge Mountains, seemed to deny that they could exist. Here, where fall came so gently and so beautifully, where those last rays of sun and the coming shadow fell upon oaks and rolling fields of green and amber, here at Montemarte, they could not possibly exist.

And still they came. Men marching, and more men on horseback. Rows and rows of soldiers.

Kiernan Miller could see them on the distant mount as she stood by the old oaks in the summer garden of Montemarte. In the dim light, it was difficult to see what color they wore. But even as she watched them, she felt panic and dismay rise within her. Her hand flew to her throat, as if she could swallow her despair.

The Confederates had pulled out of the nearby town of Harpers Ferry—she knew that. They had blown up the munitions there and pulled out. They were still near—she knew that too—but they had no large numbers, and so the horde slowly but surely rising toward her had to be Yanks.

As they came closer, she could see the blue uniforms—standard Federal issue. Union Army. They weren’t deserters or guerrilla fighters.

There could be only one reason for them to be riding toward Montemarte.

To burn it to the ground.

She stood very still, only her bright, beautiful green eyes betraying the depths of her tension. The night breeze rippled through the gold and honey-rich fire of her hair. Her slim form was as straight as the old oaks. In better times, she might have been a picture of elegance, for the breeze also touched upon the fullness of her fine gown—white eyelet over a full silver-blue skirt and a low-cut bodice with French puff sleeves. It was a beautiful gown, right out of the pages of Lady Godey’s. She didn’t know why she bothered to dress for evenings anymore, except that she had found herself plunged into a new world, and she was fighting to hang on to the traditions she knew so well.

The Yankees were coming.

She wanted to scream, and she wanted somewhere to run. She wanted to cast this information upon one of the many gallants she had known in her life. And she wanted one of them to stand up and sweep her up and promise her that everything would be all right, that she would be cherished and protected.

But there was nowhere to run, and no one to run to. Inside the house, the children would have seen the men by now. They would be coming to her. She would have to have something to say to them. It was doubtful that she could save the house—Miller firearms had already been used too successfully against the Union. She had to save her charges, though, and the slaves dependent upon her.

But the Yankees were coming.…

A cavalry unit was leading, with infantry in the back, she realized. There must have been a hundred soldiers.

Suddenly, even as they headed nearer and nearer her, the party split. Half now headed toward her, and half toward the Freemont estate down the hill.

“Kiernan! Yankees! For the love of God, Yankees!”

Kiernan swung around. Patricia, her twelve-year-old sister-in-law, stood on the front porch, her fingers clenched into her skirt.

It was curious how very lovely Patricia Miller looked. She, too, had dressed for dinner. Her blond hair hung in a single braid down her back, and her muslin gown filled with soft lilac flowers. She was framed by the house, the gracious and elegant house that looked so very beautiful and welcoming in the twilight.

Montemarte sat upon the hill on the outskirts of Harpers Ferry. Like others in the area, the Millers had found their riches in the production and manufacture of arms, and Montemarte was a monument to those riches. It was not a plantation home but a magnificent manor. There were stables for the horses that had once been the Miller family pride. There were gardens to feed the household, and there were gardens for beauty, but there were no fields for income—just the manor with its classic white Greek columns, and the stables and outbuildings.

“I know, I know!” Kiernan told her softly. “The Yankees are coming.” With a sigh she squared her shoulders and fought off a last temptation to burst into tears. She lifted her skirts and hurried for the porch. “Patricia, they’re going to want to burn the house.”

“No! They can’t! What will we do? Where will we go?” Patricia asked, tears in her wide brown eyes.

Despite its beauty, Montemarte was just a house, Kiernan told herself. Their home, yes, but still just a creation of brick and wood and mortar and plaster. They were not destitute; she could bring the Miller children to her father’s home, deep in Tidewater Virginia, on the peninsula, where the Yankees would dare not come lest they met up with Stonewall Jackson or General Lee.

She knew why Patricia was so desperate. The war had scarcely begun, but already Patricia had lost everyone. If it hadn’t been for Kiernan’s reckless marriage to Patricia’s brother, not even Kiernan would be here now for the children.

“Don’t worry,” she told Patricia. “We’ll be fine, whatever happens.”

“Like hell!” snapped a voice, and Kiernan’s eyes quickly rose to meet those of Patricia’s twin brother, Jacob Miller. Brown-eyed and tow-headed like Patricia, he was already very tall and very straight, and he carried his father’s old rifle. He gazed at Kiernan with hurt and with knowledge that shouldn’t have been seen in eyes so very young. “Bad things are happening in a lot of places, Kiernan. Lots of bad things. You’d best get yourself and Patricia hid somewhere.” There was a catch in his throat. “’Tricia’s young yet, but when them Yanks see you—”

“Jacob,” Kiernan said, and lowered her head to hide a smile. He meant to defend her honor—to the death. She had heard some of the same stories about the invading Union Army that he had, but she couldn’t believe that fifty men, riding with such discipline, were coming to dishonor one lone woman. “We’re going to be all right. They’re coming because of the Miller Firearms Factories. It’s revenge, I’m afraid, but nothing more.”

She set her hand upon the rifle, lowering it. “Jacob Miller, you can’t take on an entire Union cavalry company. In memory of your parents and Anthony, I have to make sure that you grow up and live to a ripe old age. Do you understand?”

“They’re going to burn us out.”

“And you want to just surrender the place to them?”

“No, Jacob.” She offered them both a grave smile. “I want to make the evening as wretched for them as we possibly can. I want you both to go back inside. One of you sit in the library and read a book. One of you go and make sure that Janey has started supper. I’ll stay and meet them on the porch, and when they order us to go, we’ll go. But on our own sweet time, and with lots of dignity.”

Jacob still looked as if he wanted to start shooting. Dear God, the twins had always listened to her in the past! She prayed that Jacob wouldn’t pick this moment to defy her.