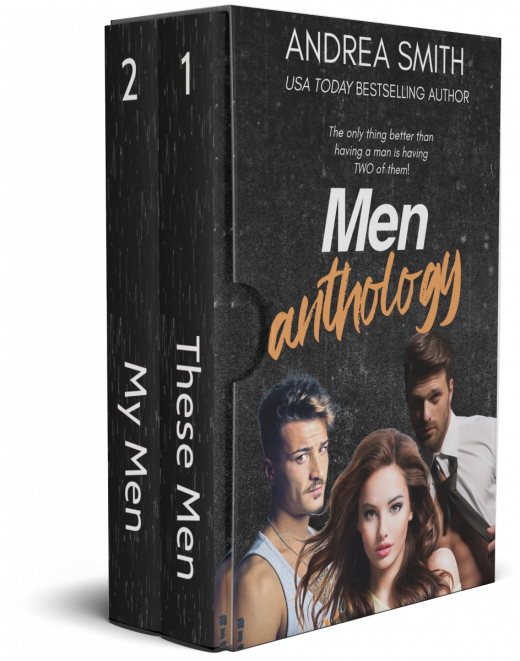 This is a MMF Romance Boxed Set containing "These Men" and "My Men".

Paige Matthews has a lot to learn - about everything, including herself. At age twenty-two, Paige finds herself driving across the country to start an internship with the F.B.I. in Quantico, Virginia.

Somewhat of a loner, Paige has a history of 'hooking-up' and little to no experience with genuine relationships. This causes angst with the relatives she's staying with in D.C. She quickly wears out her welcome, but there'is nowhere else for her to go. Paige is out of options.

Eli Chambers and his partner, Cain Maddox just happen to need a roommate, and Paige needs to be out from under her family's scrutiny. It's a perfect arrangement . . . for a while.

Paige embarks on a journey of self-discovery while living with these men. It's not an easy journey, but it is one that will change her life and their lives forever.

This sequel to "These Men," finds Paige, Eli and Cain trying to add to their family. Unfortunately, they've been trying for several months with no luck. The stork seems to be ignoring them . . . or is he?
When an unexpected person shows up on their doorstep, it isn't quite the bundle of joy they've been hoping for, but their lives are about to get even more interesting. Someone from Eli's past is about to play havoc with their summer, and put a crimp in their love lives. Steamy, sexy, and an incredibly complicated scenario is about to play out, that finds Eli caught between a rock and a hard place (pardon the pun).
Will Eli do the right thing, or put their relationship at risk? 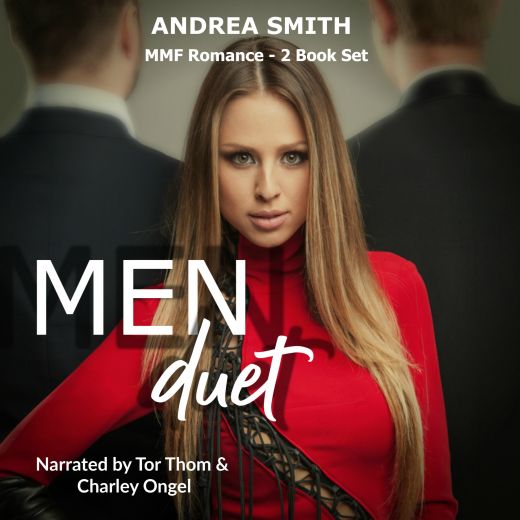 Because you all like a MMF sandwich, here you go!  All under one cover!

"Well, this is a bunch of shit," Eli rants, peeking through the blinds of the living room window for the umpteenth time over the past fifteen minutes.

"I gave her an eleven o'clock curfew and I expect her to adhere to it, at least on her solo flight for Chrissake! She is so grounded," he finishes, tossing a glare my way.

Oh. I get it. Somehow this must be my fault.

"Well then stop with shooting me the dirty looks, Eli. This was your decision, and I still think that Dalton is a responsible kid. They're not that late so chill."

Just then the front door opens, Brittany and Dalton both step inside. By the looks on their faces, they must've heard our verbal exchange. I can tell Brittany isn't pleased.

"Mr. Chambers," Dalton says, "I'm sorry we're late. There was a bad accident on the beltway. Traffic was backed up for miles."

"It happens," Eli replies, "But you both have cell phones, am I right?"

"My phone died, Dad," Brittany says, handing her cell over to Eli so that he could verify it in fact was dead.

"I see. Let me guess, Dalton's phone died as well?"

Brittany shoots Eli a glare that could kill. "Nooo," she replies succinctly, "But I have your number programmed in, it's not like I've got it memorized. Are you through grilling us, Eli?"

"Oh," Eli says with a quiet sigh, "Yeah, grilling is over. Say goodnight to Dalton," he finishes, with no intention of leaving the room in order for her to do that.

Cain and I waste no time in slinking out of the living room, neither one of us wanting to be part of whatever was going to happen once Dalton was out of hearing distance. We went to the family room and switched on the television to hopefully, drown out the sound of the argument I just know is on the agenda tonight.

"For fuck's sake," Cain remarks, "I never thought I'd say this but Eli is seriously uptight."

I take a seat on the sofa next to him. "I can't argue with that," I reply. "And there's no sign that's going to change anytime soon. I almost feel sorry for Britt."

"Me too, but I think you and I have interfered enough. From here on out, I'm staying out of it and keeping my fucking opinion to myself."

"How can you say that?" I ask, furrowing a brow. "This affects all of us, Cain. I feel like I'm living some big lie here, and in the past that might not have bothered me, but it sure as hell bothers me now."

"Hey, babe--" he starts but stops immediately as the sound of raised voices from the living room. We both freeze and strain to listen, even though we know we shouldn't.

"I can't believe how much you like embarrassing me. Eli! That is so freakin' harsh!"

"Watch your tone with me young lady. And what's with this Eli shit? I'm Dad, remember?"

"How can I forget? You watch every move I make, well guess what, Dad? Too little, too late!"

I suck in a breath, wondering how Eli is going to react to that little slap in the face. He typically maintains his cool, but let's face it, these are different times for Eli. He is definitely out of his comfort zone when dealing with a pubescent teenage girl with an attitude.

Eli's voice is calm and steady when he replies. "And you know by now that I had little choice in the matter. We've been over this, Brittany, and you are not going to play that card with me again. I'm the parent. I've been entrusted with you for the summer, and guess what? I'm glad you're here. I want to know you. I want us to love one another like a father and daughter should. I don't want us to constantly be at each other’s throats."

"Then why can't you trust me to be out of your sight?"

Cain and I wait for Eli's response to that one because in a way, Brittany has a good point. At least I think she does.

"It's not that I don't trust you, baby," he says, "It's just that…well, I can remember what it was like to be a teenage boy…and I worry. It's kind of my job, you know?"

That actually is kind of a sweet thing for him to say. I hope like hell Brittany thinks so too. Cain raises the remote in his hand and lowers the volume on the television since it appears the shouting has stopped.

There is a brief moment of silence, and then she responds. "I guess I get that, Dad. But can you at least try to show more trust in me? I'm not going to do anything stupid. This is my first boyfriend. It's not like I'm in love or anything. Dalton is fun to hang out with. I swear, he's never gotten out of line with me. And if he does, Aunt Darcy has already given me instructions on what I should do."

I hear Eli chuckle. This should be good.

"Oh yeah? Care to share those instructions with me"

"A swift knee upward to his ball sack," she replies, "And if I'm not in a position to use my knee, then fingers to the eyes."

"Holy shit," Eli says, laughing now. "Well, if anyone would know defensive tactics, I guess she would be the one."

"So, am I allowed to talk to Dalton still?"

"Tell you what, go put your phone on the charger and text him that your old man apologizes for jumping to conclusions. If he wants to take you out again, I promise I'll be chill with it, on one condition that is."

"What?" she asks tentatively.