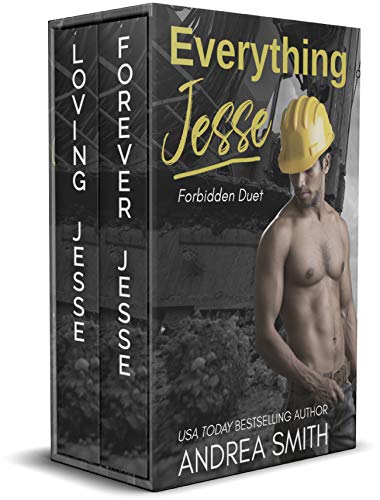 "Fresh, addictive, and so incredibly hot! The chemistry pulled me in and never let me go."

"I love a taboo romance that has class. Loving Jesse is certainly one I won't soon forget. Now I need more!"

Everything Jesse is the 2-Book Box Set!"

Now you can get all of Jesse under one, sexy cover!

When is love wrong?

Jesse Ryan has always been the love of my life, from as far back as I can remember. But time, distance and circumstances beyond my control separated the two of us for many years.

Now things have changed. Because you see now I'm a grown woman, and it's time that Jesse sees that for himself. But will he see me as anything other than the child I was when we last saw one another? It's up to me to make sure that he does.

Look out Jesse Ryan. September is back.

We've managed to keep our relationship discreet, but at the same time, planning our future together. Then we get . . . the news. Now everything we've been planning is suddenly and inexplicably torn from us.

Decisions need to be made, and everyone looks to me to be the one to make them. But how can I make a decision that will be in everyone's best interest, and not tear our hearts to pieces?

I've survived the first couple weeks of college, and struck a balance between school, work and a fledgling social life even. Slowly, I'm starting to adjust to being on my own. I know it's time for me to take the next step.

I pick up my cell and press the number I have already programmed into my phone. Gram answers.

"Oh my God, September," she says, her voice cracking. "Do you know how worried Grandpa and I have been not knowing where you've been or how you're doing?"

"I'm sorry, Gram. It's just that…well, things got really complicated and all--"

She cuts me off. "I know about it. Your grandpa filled me in after Jesse and Scout left. I don't know what to say or even think about that, September."

And I know my gram. I know she's disappointed--maybe even ashamed of me, and definitely pissed off about it. But probably more at Jesse than at me.

"I won't discuss that with you, Gram. No disrespect, but it's my private business--it's between Jesse and me."

I can feel her frown over the phone. I'm familiar with it.

"You--you're not still carrying on with him, are you?"

I sigh loudly. "Gram, I called to let you and Grandpa know that I'm fine and to give you my new number and my address. I'm out on my own, and I'm doing well. I'm in school, and I'm working. I would just appreciate it if you keep this information to yourself."

"I see," she says, "Of course, I will. You have no worries about that. Henry and I sure as hell don't want Jesse getting access to you. I'm guessing that's why you've made this request."

I'm silent. She's right, but the way she just put it makes me feel downright pissy with her.

"You haven't asked about your mother," she finally says breaking the uncomfortable silence.

"My mother left me six years ago. I'm sorry if I don't feel the need to ask about her."

It's the truth and I know just how cold and unfeeling it sounds. But what am I supposed to feel? I wish someone would clue me in because, at this moment in time, all I feel is ambivalent.

"September, I know what she did to you and Scout was wrong, honey. There's no denying that, but she's not the same person that left there six years back. She's Sarah now. She's sweet and gentle and, in a way, she's very fragile. But she's back and we pray every day, thanking the Lord for that, but we also pray that eventually some day she does remember."

"Why would you want that for her?" I ask, a hint of disbelief sprinkled in my voice. I mean, seriously, it sounds as if Sarah is a better person and in a better place than Libby ever was.

"We don't want that for us. We want that for you. Oh, I realize that Scout was too young to really remember all of that. No, the person that Scout met as her mother a few weeks back is not the same one that took off on y'all. Scout has no axe to grind with Sarah, because she doesn't remember Libby. But you do. And, honey, she owes you an explanation. That's all I meant."

"She was fine while she was here with us. Took to Sarah, they talked, played some board games and cards. Even put a puzzle together. She wanted Sarah to go back with them. I reckon you didn't know that being that you'd already left."

Her words are like a knife that's just been shoved into my heart. "No, Gram. I didn't know that."

"Uh…did she go back with them?" I ask quietly, bracing myself for what I knew was the main reason I had left.

"No. Jesse tried to explain as best he could that it just wasn't in her best interest. It broke Sarah's heart. I mean, sure, he was a stranger to her, but I believe she understood when we had explained he was her husband, and Scout her daughter, that it was the truth. I think maybe she just presumed they'd come to take her home. I don't know," she continues, sounding disillusioned, "maybe we mishandled the whole damn thing."

"How is she now?" I ask tentatively.

"Oh, she's settled down a bit. Scout calls her now and then, and that seems to perk her up quite a bit."

"Well, it's going to take some time for me, Gram."

"I understand, honey. But you will keep in touch with us?"

This is the only day during the week that I'm done with classes and don't pull a shift at Rudy's. My curiosity, along with the overflowing guilt I've been harboring for leaving Scout have become too much for me to bear. I'm taking a drive.

Yeah, I know that Jesse won't let Scout stay at home by herself yet, but I recall that before I came here last summer, Casey mentioned that Jesse had hired someone to be at the house to keep Scout until he got home from work. I'm counting on the fact that he's done the same now. I mean, we never discussed the arrangements once I was scheduled to start college.

Add that to the hundreds of other things we should've discussed but hadn't.

I park around the corner from their house. As I creep around the side of the house situated across the street and over one to the east, I have a perfect view of the driveway.

Good. Jesse's truck is gone. Just as I start to straighten from my crouched position behind Mrs. Terhune's oleander bushes, I see Casey's car round the corner and pull up into the shared driveway between the two houses.

I crouch back down, waiting for her to go into the house so I don't have to deal with that bitch's nastiness.

I feel my jaw drop as I see both Catherine and Scout get out of Casey's car. I watch as Casey opens her trunk and pulls out a couple sacks of groceries. "Come help me girls," she calls out to them. "If we're all going to enjoy this chili this evening, then we're all going to help carry these bags in, hear?"

Catherine and Scout each grab a sack before she shuts the trunk, and they follow her inside. The reality of what's going down on Juniper Drive hits me like a bolt of electricity.

I spring from my crouching position and head around the house to the side street where I parked my car just a few minutes ago.