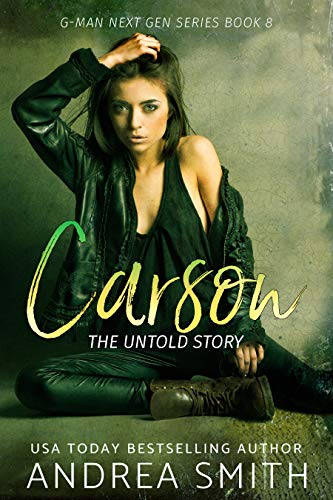 This is one of those stories that you can read multiple times and still come away feeling something new. Andrea Smith is an author who always delivers!

This is a fast, sexy read with a hint of who done it and a lot of steam. If you're looking for more than hearts & flowers, or just a straight mystery, this book is for you.

I love when an author can keep you guessing and give you the twists and suspense in the romance you crave. Carson has a strength I believe most women have but to see how she came through what happened and continue moving forward with the determination of who she is. Krew was the perfect match for her. I was hooked from start to finish and felt all the feels. A great standalone, if you haven't read the series.

Carson: The Untold Story is a phenomenal contemporary romance with a twist of suspense by Andrea Smith. Ms. Smith has once again produced a book that kept me glued to my e-reader.

I've been through an horrific experience, one that left me clinging to life in the hospital. Everyone has questions. I don't have the answers to give them. You see, I have no clue as to the details leading up to my "accident." But there are people out there that have the answers, and I'm determined to find them - before they find me.

Enter Krew Beckett, who unexpectedly crosses my path once I return to Columbia University, He was my physical therapist after my attack, but he quickly becomes more than that in the ensuing weeks ahead. He understands my need to find the answers locked away in my mind.

But is Krew hiding secrets, or am I simply afraid to trust anyone?

Come take this journey with me. 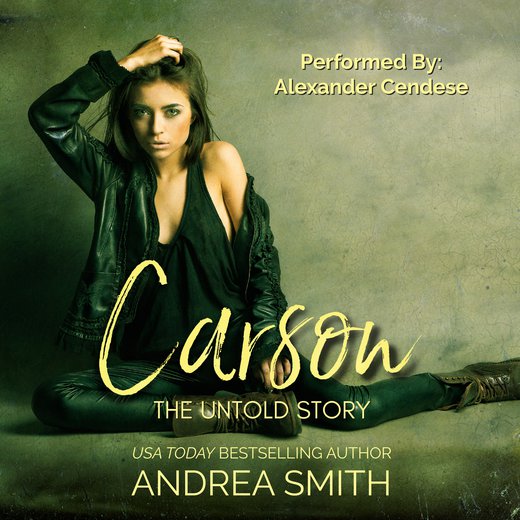 Carson is one of the G-Man Next Gen Books. All can be read as stand-alones!

Back in 2016, I released my first G-Man Next Generation title, Walk of Shame. Readers need to know that the Next Gen series do not find the offspring of Slate or Taz doing the FBI thing; or Easton's offspring of being top-level, security cleared product and service suppliers to top global intelligence agencies.

They're simply the offspring; doing their own thing, marching to the beat of different drums, making mistakes, and not always making the choices their parents would like them to make. Sounds fairly normal, right?

Well, I've found that these next gener's have a propensity to make you laugh, take a deep breath, roll your eyes, and maybe even piss you off a bit. But that's all in the way they were raised, right?

Each one has their own story. They are all stand alone New Adult Romances with varying flavors.

So Walk of Shame is Easton and Darcy's son Weston's story. And it's pretty entertaining. You'll meet him again (or for the first time maybe) in Carson: The Untold Story.

So many of my readers of Walk of Shame have been asking for Carson's story for the last five years! I actually had no plans to write a story for her, but her character in WOS with the mystery and secrets she kept from her family intrigued enough readers that I decided to develop a plot from her appearance in that book which wasn't easy. I truly hope you enjoy it.

I'm considering doing a book for Harper, Taz and Lindsey's daughter who you'll meet in this book.

I feel like I’m floating in darkness. My eyes refuse to open, my limbs refuse to move, and the only sense not shut down appears to be my hearing.

I hear the sounds of air being pumped and then released into something with a long sigh. Doors swishing open and closed. Echoes of footsteps in the distance.

And then I hear a voice. A familiar male voice with an unfamiliar timber. He’s talking quietly to someone. I then process that he’s talking to me.

It’s my older brother, Weston. He’s blaming himself for some shit I clearly don’t understand. What the hell does he think I’ve been involved in?

Silence follows. Is he still here with me? Then his voice floats to my ears. It calms me.

“Anyway, Sis, when you wake up, you and I are gonna have a long talk about that shit, you hear me? You’ve been playing Russian Roulette with your life, and I need to know you’re going to stop that shit. So, for right now, you focus on getting better. After that, I will make sure that you’re safe from here on out. I love you, Sis.”

He said when I wake up. Then I’m not dead? Thank fuck! I’m in the hospital. It explains the beeping noises, which, quite frankly, are really getting on my nerves.

So, apparently, something horrible has happened to me that has landed me here in the hospital. I’m trying like hell to recollect what it could be.

I feel someone else is standing over me. But somehow I know that it’s not Weston.

“My sweet baby girl. Mommy’s here. If you can hear me, please give me a sign.”

The sound of sniffling follows. Mom is here and she’s crying. I want to give her a sign, I really do! But I can’t because nothing is working like it should.

“I feel like this is my entire fault. Like maybe I should’ve kept a better eye on your activities at college.”

Oh hell. She’s beating herself up. If I could talk, I would immediately blurt out to her that nothing is her fault because I know I have a mind of my own.

I hear distant footsteps getting closer. Someone else is now here with Mom. I hear his comforting words to Mom. It’s my father.

Family dynamics are funny. Not ‘har-har’ funny, but rather odd. The reality is Weston’s connection with Mom is much tighter than mine, though I do love her to pieces, but with Daddy, it’s like I can do no wrong. Same dynamic between Mom and Weston. He of course doesn’t see it.

My brother and I are a couple of years apart, but growing up, Daddy was gone a lot and Mom was the disciplinarian. It seemed like I was forever grounded for this reason or that, but not Weston. All he had to do was turn on the charm and Mom melted like a snow cone in hell.

I can hear his comforting words to her right now, in that lovely British accent.

“Darcy, love, Carson is strong. She will pull through this, I promise.”

“Oh Easton, you can’t make that kind of promise. I need her to give me a sign. I’ve been talking to her for the last two days, and no sign she even knows I’m here.”

I want to scream, “I hear you Mom! I hear you Daddy!” but nothing will come out. I’m frozen but not cold. I can’t feel anything. Am I paralyzed?

My father’s voice now sounds tortured. I hate that I’ve caused this pain to my family.

“My God, Darcy, even you must consider the possibility that this . . . this proclivity could be inherited in which case, I’m to blame.”

“Easton, stop, please. We shouldn’t discuss this in front of her. Anyway, put that thought out of your mind. I assure you, it’s not genetic.”

Oh shit. What the hell are they talking about?

“We don’t know that, Darcy. Nobody knows if sexual proclivities are a result of nature or nurture.”

“Hush, Easton. Let’s talk about it later and not here.”

Huh? Sexual proclivities? Did I get here because of some kinky shit Daddy thinks I inherited from them - or more specifically, him? Isn’t that just like parents to want to assume guilt for something they played no part in? I think back to when I was eleven or twelve years old.

I was snooping around in my parents’ suite before Christmas. Suffice it to say, I found no hidden presents, but I was able to uncover some . . . well, for lack of a better word, interesting gadgets. At the time, I was clueless to their purpose, but years later, it became perfectly clear to me. Crops, leather harnesses, nipple clamps, furry wrist and ankle cuffs.

So, yeah, later on I understood what those gadgets were all about. So my parents were into some kink? It was no big deal, although I didn’t actually want to dwell on it, they were my parents for Chrissake. But now Daddy had just outed himself as being the instigator. Apparently, he thought it was genetic. If I could have mustered up a giggle in Coma World, believe me, I would have in that moment.

Ah, so yeah, that must be what landed me here. I connect the dots and recall the things my brother Weston mentioned while talking to me and it now makes perfect sense. I’m sure bits and pieces will surface, though a part of me doesn’t want it to because I may not survive the memory emotionally. I can choose not to remember. I’m stubborn that way. So, I need to sleep now; to shut out the sounds and let my mind rest. And just as I think that thought, I hear a nurse murmuring something to my parents.

“She needs to get some deep rest, Mr. Matthews. This will help her.”

“But all she does is sleep,” he argues.

“Comas are not the same thing as restful sleep, Sir. Actually, they can be exhaustive as the brain works to heal. This won’t hurt her, Sir. She’ll just get the rest she needs.”

And no sooner than I absorbed her words, I did indeed drift off into a restful sleep.