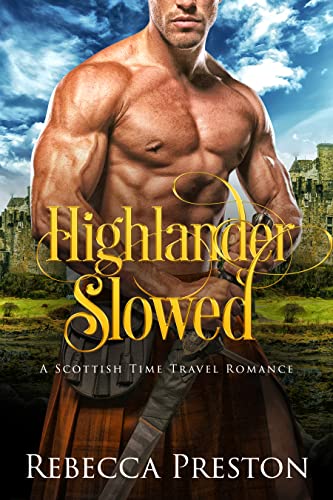 When Kelly finds herself thrust back in time to ancient Scotland near the MacClaren Keep, she must face her own grief and fight against the scars of her true love’s past to find her future…

Recently widowed Kelly is seeking a way out from her dark mourning after the death of her husband at the hand of a mugger. But when she wanders through a dark course at a hotel in Scotland and stumbles into ancient Scotland in the middle of a bandit-filled night, she stumbles on a man with her husband’s face. Only this one holds her at knife-point and demands her valuables.

Danny MacClaren has a death wish and a vendetta against the bandits who took his wife’s life several years ago. So when he rescues a woman who looks exactly like his lost love from such bandits, he realizes she’s his second chance.

Only, things aren’t that simple for Kelly. Now haunted not only by the memory of her dead husband but also seeing a bandit with his face, Kelly fights her attraction to Danny and accepting the truth of who she is to him.

But when a cunning bandit tries to use Kelly’s situation to his advantage, she’s forced to confront her new reality and see what her new life offers her—a second chance at true love.

Highlander Slowed is the fourteenth book in the Highlander of Time series, perfect for fans of brooding heroes, intrepid heroines, and page-turning time-travel romance. Grab your copy today, and enter the exciting world of Highlander of Time!
Read more