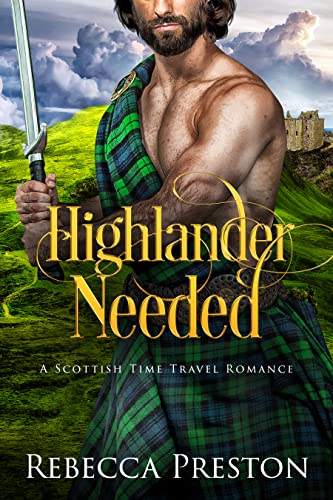 When Maria tumbles back in time to ancient Scotland near the MacClaren Keep, she must set aside her skepticism to see what’s really in front of her—her true love…

Atheist scholar Maria Olmos has spent her life debunking the beliefs of others and writing books. She doesn’t believe in much, so when she finds herself in ancient Scotland, she decides she must be in the middle of an extremely dedicated and elaborate prank. It’s the only logical explanation.

Like the rest of his family, Bran MacClaren’s lost love has returned in the form of a confused woman from the future. But unlike the former reincarnated time-travelers, not only does Maria show no interest in him—the man she was destined to reunite with—but she actually gets involved with a guard for the MacClaren’s sometimes-enemy Lord Weatherby.

Bran and other time-lost women do their best to convince Maria of the truth of her situation, but as they do, the already tenuous situation gets even more complicated when Maria finds herself drawn to both men. Caught between them, she’s even more confused than ever.

And when the tension eventually spills over and real blood flows, it forces her to finally admit the situation is far more real than she thought, and that her true love is right in front of her.

Highlander Needed is the thirteenth book in the Highlander of Time series, perfect for fans of brooding heroes, intrepid heroines, and page-turning time-travel romance. Grab your copy today, and enter the exciting world of Highlander of Time!
Read more