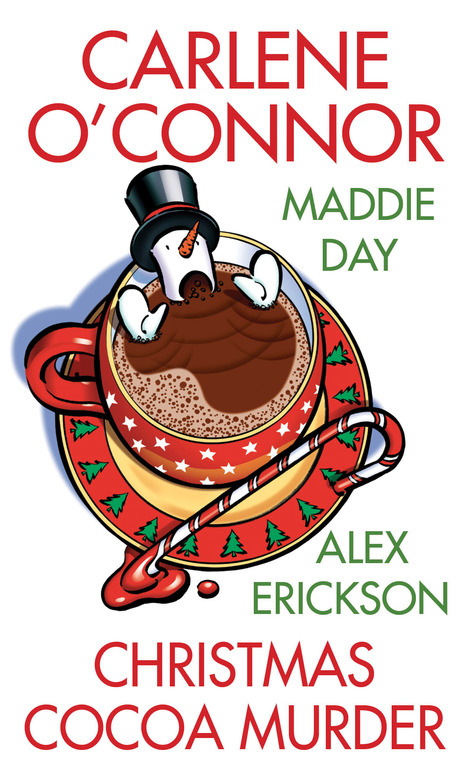 Siobhán O'Sullivan's hopes for a quiet Irish Christmas are dashed when the local Santa turns up dead in a carnival dunk tank of hot cocoa. Now, instead of hunting down holiday gifts, she's pursuing a heartless killer. Seems the dead Santa was no angel either, stealing neighborhood dogs to guide his sleigh. But was it his holiday antics - or worse - that led to his death by chocolate?

"Christmas Cocoa and a Corpse" by Maddie Day

When local businessman Jed Greenberg is found dead with a chocolate lab whimpering over his body, the police start sniffing around Robbie Jordan's country restaurant for answers. Was it something in Robbie's hot cocoa that killed Jed, or was it Cocoa the dog? As the suspects pile as high as her holiday tree, Robbie attempts to get to the bottom of the sickly-sweet murder....

A Christmas-themed escape game seems like the perfect pre-holiday treat for bookstore cafe owner Krissy Hancock and her best friend. But when the host is found dead in a pool of hot cocoa, it's up to Krissy and her team to catch the killer - or escape before getting killed. 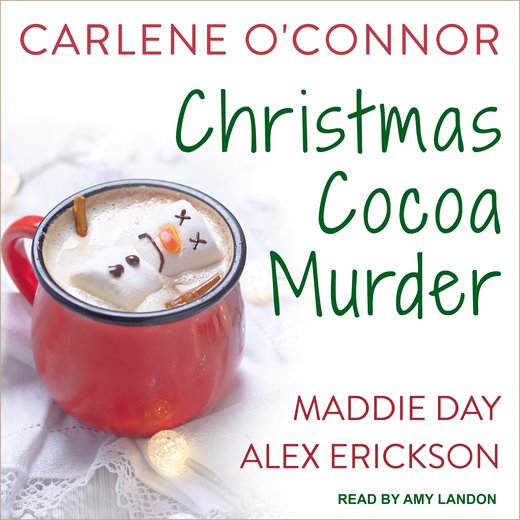 Siobhán opened the door to the back garden of Naomi’s Bistro, wielding a fat bone fresh from the butcher’s. She waved it around, hoping to entice the family pup in from the cold. “Trigger. Come on, boy.” She was late for the Christmas extravaganza in the town square, but worry had her rooted to the spot. Their Jack Russell terrier had never been away from home this long. “Trigger. Look what I’ve got. Straight from the butcher’s shop.” She sounded like a right eejit, waving a dog bone and talking to an empty garden. “Come on, luv. Come home.” Had he wandered into someone’s door last night, and they’d simply yet to let him out? She prayed that he was curled up in an oversized armchair, snoozing away, being well looked after, and he’d be home as soon as they realized they’d forgotten to let him out . . .

Preposterous. Everyone in town knew Trigger was their pup and they knew to return him straightaway. Perhaps he’d wandered into someone’s shed or outbuilding, or even the boot of a car, and Trigger would be home as soon as whatever door he was trapped behind was opened again.

Those were the best-case scenarios.

“Enough,” Siobhán said into the crisp night air. Her siblings were going to be in the Christmas panto. She could not afford to have her imagination running dark. Trigger would be home soon. At least her brood hadn’t realized he was gone. They had been at rehearsal all day. She’d been keeping it a secret, if they knew they’d never be able to concentrate on the play.

She had already searched their back garden and shed, tried to see if there were any little paw prints to follow out back, but if there had been, the overnight rain had washed them clear away. She wondered if not being able to find the family dog was a bad omen for becoming a guard in the new year. He was such a homebody she’d often mistaken him for a rug in front of the hearth rather than a dog. Siobhán left the bone by the step, and sent a little prayer that he would be tail-wagging on the step when they arrived home, glaring at her for leaving him out in the cold. If he wasn’t home by the time she returned, she and James would go on an all-out search. She locked the back door, and then exited through the front.

Sarsfield Street was beginning to look a lot like Christmas. Up and down the footpath white lights danced and pine wreaths sang from doorways. Garland and bows wrapped themselves lovingly around the iron street lamps. Fresh-cut Christmas trees were propped up outside Liam’s hardware shop, their branches reaching out for their new homes. Siobhán had taken to explaining to people that Naomi’s Bistro was slightly behind in their holiday decorating, and by slightly behind she meant she hadn’t even started. Shopping. Cooking. Decorating. Baking. Entertaining. And unless Eoin and James were taking care of it, she hadn’t even begun to think about Christmas supper. She had batches and batches of brown bread to bake, not to mention cookies, and maybe a sherry trifle this year. After all, she had a bit of competition.

Declan O’Rourke had made his mam’s hot cocoa this year, and supposedly it was to die for, both with and without the added kick of Irish cream. He was outselling even Siobhán’s brown bread, and several times she’d glanced out the window to see long lines of folks waiting to get into his pub for a hot cocoa fix. “You buy the finest squares of chocolate and melt them down with sugar, and powdered cocoa, dat’s me mam’s trick,” Declan crowed. “Then, of course, there’s the Irish cream, then top it with fresh cream. You can’t beat it.” She had yet to try it, but that would soon be rectified as O’Rourke’s was going to have a tasting booth set up at the winter carnival. It was all starting this evening in the town square.

Up ahead she saw a wheelchair stopped in the footpath. Soon she recognized Adam Healy’s mop of blond hair. A tall weed of a man stood next to him taping a flyer to the street lamp. As Siobhán neared, she saw it was a photo of Adam’s new golden retriever puppy, with capital letters splashed across the top: GOLDIE MISSING.

“Missing?” Siobhán exclaimed. Adam turned to her as Siobhán gently touched his shoulder. Just ten years of age, Adam was the butcher’s son. Ed Healy had just sold her the bone for Trigger and he hadn’t mentioned Adam’s pup was missing. Come to think of it, she hadn’t mentioned Trigger was missing either, for she’d been afraid saying it out loud would somehow make it real. She realized now how silly she was. She should have told her siblings, and they should be putting up flyers as well.

“Someone stole him,” Adam said, his bottom lip quivering.

Siobhán turned to the man next to him. He was a man into his late sixties, with a haggard but kind face. “Are you Adam’s grandfather?”

The man held out his hand. “Dave Healy. I’m the uncle.”

She could see it now. He looked like an older, thinner version of Ed, the butcher. “Nice to meet you. Where you from yourself?”

“Mayo,” he said. Mayo was in the west of Ireland, and it had been ages since Siobhán had been. One of these days she was going to go on a holiday around Ireland. And then everywhere else.

He gave a nod and then lifted the flyers in his hand. “Didn’t expect Christmas to start off with such cruelty. What kind of person would do something like this?” He glanced at Adam. The poor lad had had a rough start to life. In a wheelchair since five years of age after an illness left him paralyzed. Then last year his nana died at Christmas. His mam was called away this year to visit her sister, who was in hospital in America. Now this. That’s why it took a village to raise a child; the world could be a cruel place indeed.

Siobhán knelt next to his wheelchair and placed her hand on his shoulder. “Tell me everything.”

“He was an early Christmas present from Uncle Dave. Even though he’s allergic.”

Dave laughed. “The chemist will sort me out, lad, don’t you worry about that.”

“Goldie was in our garden last night. He likes it out there and Da said puppies need to get out their excess energy, so we let him be. When I went to call him in for the night, he was gone.” His voice trembled and tears welled in his eyes.

“Is it possible he just wiggled out on his own?” Siobhán wanted to make it sound like everything was going to be fine, but she had a feeling that two missing dogs was no coincidence.

Dave Healy shook his head. “The garden is well fenced-in, I went around and checked before we let the pup roam about. And I did a second check after he went missing. There’s no signs of him rooting around under the fence. Someone stole him.” He, too, was trying to sound calm for Adam’s sake, but Siobhán could hear the worry in his voice.

What does it mean? Did they have a dognapper running around Kilbane? Some kind of Grinch stealing family pets? She shuddered to think of it. Siobhán wanted to scoop Adam up and make everything better. She stared into his worried blue eyes, which seemed even larger through his thick glasses, and she tried not to melt into a puddle of goo at his feet. “Sometimes doggies have their own little adventures, do a bit of wandering around.”

“But Uncle Dave said somebody stole him.”

“We’ll tell the guards, then. I’m going to be a guard myself in the new year. Finding Goldie can be my first case.”

“You’re going to wait until the new year?”

“No, luv. I’m going to start looking right after the panto. I promise.” Along with Trigger. Where could they be? She squeezed his shoulder. “Try not to worry.”

Adam bit his lip and gave a curt nod. “That’s right. Nothing to worry about,” Dave echoed. “We’ll find him.”

“Do you need help posting those flyers?”

Dave shook his head. “I’m taking him to the panto and we’ll pass these out at the carnival.”

“Ah, brilliant.” She took a few from the pile and promised to do the same as she hurried on. She’d only managed a few steps when her eye caught another poster taped to a street lamp. This one was for a black Lab named Blackie. The next lamp featured a missing collie named Lassie. And the one after . . . a wolfhound named Wolfy. She was starting to think the Irish were a bit simple with their names, but it was no time for humor. What on earth is going on? There was a serial dognapper on the loose. Trigger hadn’t run away. She knew it. And unless they found the culprit soon, it was beginning to look a lot like a blue Christmas.

As soon as Siobhán passed King John’s Castle, she could see that the town square had been transformed. An enormous Christmas tree stood proudly midsquare, lights shining. Santa’s throne, an elaborate golden affair, was set up in front of a red carpet. A manger was erected to the left, complete with stuffed sheep, a donkey, and Wise Men. A white tent was erected in the middle of the square, its flap closed tight with a banner above reading:

“What in the world?” Siobhán said out loud. There had been some rumors about the shenanigans Paddy O’Shea, otherwise known as the town Santy, had been up to with this year’s festivities. Last year, Charlesville’s town Santy had brought in live reindeer from Wales. Paddy had been obsessed with besting him, and it looked as if he was attempting to pull it off.