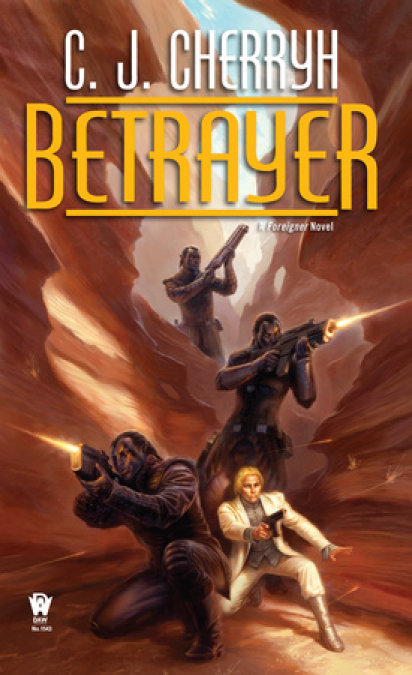 The twelfth novel in Cherryh’s Foreigner space opera series, a groundbreaking tale of first contact and its consequences…

In the wake of civil war, Bren Cameron, the brilliant human diplomat of the alien atevi civilization, has left the capital and sought refuge at his country estate, Najida. But now he is trapped inside Najida—which has been surrounded by enemies—with Ilisidi, the powerful grandmother of his ally, Tabini-aiji, atevi leader of the Western Association. But Ilisidi, the wily and dangerous aiji-dowager, is not inclined to be passive, and in a brazen maneuver sends Bren into enemy territory, to the palace of Machigi, the leader of the rebels.

Bren's mission is to negotiate with Machigi—a young atevi lord who has never actually seen a human—and somehow persuade him to cease his hostile actions against the West. Bren knows that the autocratic Machigi rules a fractious clan, and that his hospitality is not guaranteed. Bren's genius for negotiation enable him to make a daring trade offer to Machigi—one that seems to interest the young warlord. But Machigi is suspicious of Ilisidi's motives, and, to Bren's utter shock, evokes an ancient law that jeopardizes Bren's life. Can Bren stay alive and not alienate Ilisidi or Tabini, while also representing the interests of their enemy?

The long-running Foreigner series can also be enjoyed by more casual genre readers in sub-trilogy installments. Betrayer is the 12th Foreigner novel, and the 3rd book in the fourth subtrilogy.