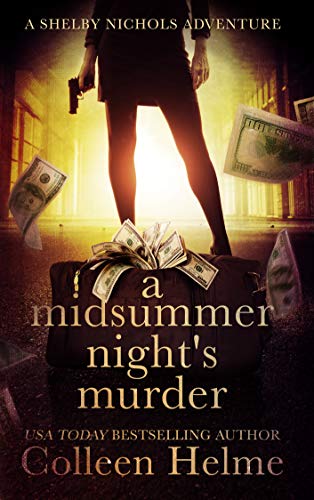 For a mind reader like Shelby Nichols, finding a murderer should be a piece of cake. But add an overzealous prosecuting attorney with a grudge against her, and the wrong person could end up in jail. Can Shelby find the real killer before he strikes again? (From the Summer Snoops Anthology)

It’s never good to get a call from the police first thing in the morning.

With summer in full swing, I didn’t have to get up early to get my kids off to school. My husband Chris, had already left for work, so the phone call from Detective Harris, aka Dimples, woke me up.

I checked the time. Since it wasn’t eight o’clock yet, I decided to tell him the truth. “Uh…yeah.”

“Sorry. There was a murder last night. We brought in a suspect, but he’s insisting that he didn’t do it. I could sure use your mad skills right now.”

Dimples is one of the few people who knows my mind-reading secret. I tell most everyone else that I have premonitions to explain what I do. That might seem like a cop-out, but I call it self-preservation. Plus, most people would freak out if they knew the truth. Who knows what would happen to me then?

It’s bad enough that a mob-boss, whom I call Uncle Joey, knows my secret, and coerced me into working for him. His hitman, Ramos, also knows my secret. He’s one of those hot, sexy men that have women drooling just at the sight of him…me included. But, since he’s saved my life more than once, I can’t complain.

Still, I hate to think what would happen if anyone else found out, and the lengths they’d go to use me for their own purposes. So, I figure that the fewer people who know the truth, the better.

“Okay. I’ll get ready and come in, but it will be about forty-five minutes before I can get there.”

“That works. Thanks. See you soon.” He disconnected before I could say another word. Probably so I couldn’t change my mind.

I let out a sigh, remembering the day it all began. I’d been shopping at the grocery store for some carrots, and got caught in the cross-fire of a deranged bank robber. I took a bullet to the head. It was a minor injury, but it had left me with the ability to hear what people were thinking.

Dimples was the detective assigned to my case back then, and, ever since, I’d been helping him off and on with his hardest cases. His name is Drew Harris, but because he has these amazing dimples, my nickname for him stuck. He doesn’t mind it too much, as long as I’m the only one who calls him that.

Since I didn’t have time to shower, I washed my face and tried to tame my long golden locks. My kids were still asleep, and I mentally went over the list of things going on today. Josh had to be at the country club at nine-thirty. He has the amazing job as a lifeguard at the big pool, mostly because of Uncle Joey’s influence. He’s only fifteen, so he doesn’t drive, but he can ride his bike since it isn’t far.

At thirteen, Savannah could take care of herself and, since we didn’t have plans for the day, it was easy for me to be at anyone’s beck-and-call. Today, it was Dimples; tomorrow it could be Uncle Joey. I also had my own consulting agency, mostly because I felt it my duty to help people since I had this crazy ability. But thankfully, I didn’t have a lot going on there at the moment.

I woke my kids up, explained that Dimples needed me, and grabbed a granola bar before hurrying out the door. My kids were getting used to my crazy work hours. They knew I worked for Uncle Joey and the police, but they didn’t know I could read minds.

They believed the lie that I had premonitions, and I hoped that they never found out the truth. Just thinking about how that could change things between us sent dread spiking through my stomach. My husband, Chris, had a hard enough time knowing I could hear his thoughts, so I was pretty sure my kids would hate it.

I parked at the precinct and hurried inside. Dimples caught sight of me and let out a relieved breath. He was thinking that he’d made them wait to charge the suspect with murder until I got there, but the pressure from the prosecuting attorney’s office was getting stronger by the minute.

“Glad you’re here,” Dimples began. “Let me tell you what I know. The victim, Molly May, was shot and killed during the night. A neighbor heard the shots and called the police. They found her dead, with the murder weapon lying beside her.

“The police questioned the neighbor who’d called it in. He told them he’d heard her arguing with her boyfriend earlier, and gave them the boyfriend’s description and the make of his car. After a quick search of the area, the police found the suspect in his car a couple of blocks away. They arrested him on the spot.”

“Well, that’s where it gets tricky. There was a warrant out for his arrest.”

My brows rose with surprise. “What for?”

“He had some outstanding parking tickets. When they weren’t paid, a judge issued a warrant.”

“You mean you can go to jail for not paying a parking ticket? That’s insane.”

Dimples shrugged. “Unfortunately it happens. The guy’s name is Angel Molina, and he sounds pretty convincing to me, but I’m probably the only one who thinks he’s telling the truth.” He thought with the police focusing on Angel as the murderer, the real killer could get away with it, and that’s why he needed me.

Dimples led me to the interview room, and ushered me inside. The man sitting at the table glanced up with red-rimmed eyes. With his olive skin and dark wavy hair, he could have been Ramos’s cousin. His hair was a little longer than it should be, and poked up here and there because he’d run his hands through it so much. His face was rough with stubble, and his eyes were dark with pain.

I opened my mind to him, and picked up more sorrow than I’d ever felt from anyone. It washed over me in a wave of despair, and my throat tightened with emotion.

“Angel, this is Shelby Nichols, a consultant that works for us. She has a few questions for you.”

I sat down in the chair opposite from him, and swallowed to get some composure. I picked up enough to know that Molly May was someone he loved dearly. She was his lover and best friend, and now she was dead. Knowing that he’d never see her again pierced him with heartache and unbearable pain.

His eyes widened. I was the first person who even came close to understanding how much pain he felt that Molly was dead. “Thank you.” He caught my gaze and hope entered his heart. Maybe I was someone who’d finally listen to him. “We need to find the person who did this to her.”

“Yes,” I agreed, knowing immediately that it wasn’t him. “What can you tell me about last night?”

“It’s like I told the others. Molly had been acting strange…more distant and irritable, but she wouldn’t tell me what was wrong.” He was thinking that she was preoccupied, most likely because she was helping another student after he’d expressly told her not to.

“Then we got in a fight and she kicked me out. My pride was hurt and, since she wouldn’t listen to me, I left.” Angel rubbed his forehead and sighed. “I should have been there. She might still be alive if I’d stayed.” By giving her an ultimatum about helping those kids, he’d thought to protect her, instead it had backfired, and now she was dead.

“What did you do after you left?” I asked.

“I had nowhere to go. So I got in my car and drove around for a while, then I went back. The house was dark, so I parked a few blocks away where she wouldn’t find me, and I fell asleep. I planned to go back and talk to her first thing this morning and make it right. You know? Get her to talk to me? Tell her I was sorry…”

“Sure. So then what happened?”

“The next thing I know, some cop is pounding on my window and yelling at me to get out of the car with my hands up. They didn’t tell me why or anything. He just threatened to shoot me. I opened my door, and my dog started barking. She’s a rescue animal I got at the shelter, and she’s a little skittish with strangers.

“I tried to tell them about her, but they freaked out. One of them took a shot at her, and she yelped and took off. I don’t know if she got hit or not, and I can’t go looking for her.”

“Oh no. That’s awful.” I glanced at Dimples with accusation.

“Hey, this is the first I’ve heard about the dog.” He hadn’t been in on the questioning, and no one mentioned anything about a dog.

“We need to find her,” I said to Dimples, then I turned to Angel. “What’s her name?”

“Pepper,” Angel replied. “She’s a mixture of border collie, lab, and beagle, and mostly black with some white on her chest. She might have gone back to the house, but if there are a lot of strange people around, I don’t know how close she’d get. But if she’s been shot…” He closed his eyes and sighed. “I can’t lose her too.”