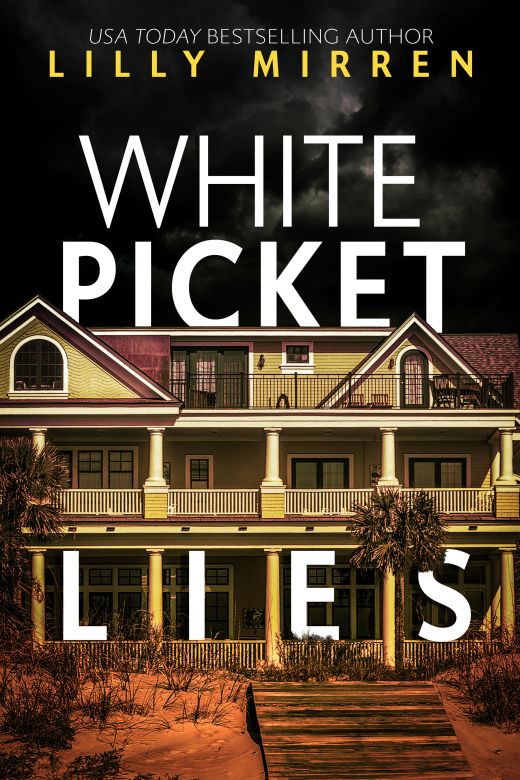 In a town this small, it's only a matter of time until friends and neighbours turn on each other.

Zoey lives in a suburban home by the beach, in a gated community where nothing ever happens… until her whole life is thrown into chaos when a body appears in the garden next door. A neighbour is dead and her teen daughter clearly knows more about the tragedy than she's letting on.

Stella is new to the area and doesn’t want to get involved. She’s a single mum with a secret and the last thing she needs is more scrutiny. Looking for answers in her own life, her search becomes inextricably intertwined with the investigation. As much as she tries to stay away from it, something keeps drawing her back in.

Toni is fighting the demons of the past after finding herself in the midst of a second marriage breakdown. She struggles to keep depression at bay while doing her best to raise a wayward teenaged son and uncover the identity of the killer.

Three friends, all willing to do whatever it takes to protect their families… and the lies that kill.

It wasn’t the goals he’d never accomplish or the things he wished he’d done that flashed through the man’s thoughts as he lay prone on the damp ground, the lifeblood seeping from his body. It wasn’t like people said it would be. He wasn’t scared or anxious, didn’t scramble or fumble for a rescue that wouldn’t come. He lay still and quiet, knowing what he faced and realising with a sudden clarity of thought, through the resounding throbbing at the back of his skull, that his time was now.

He tried to reach out for something to hold onto, but his empty hand fell back to the soil with a gentle thud. A sharp object pricked his wrist—a stone, perhaps, or a thorn. He couldn’t say which. Waves shushed quietly in the darkness, curling to shore in the distance in a soothing rhythm.

No, the thoughts that launched themselves across his mind’s eye as he lay dying were his deepest regrets. The things he’d done that’d caused so much pain to the ones he loved most. The parts of himself he’d held back, the vulnerability he’d avoided because it was all too hard.

It didn’t seem hard now, but his perspective was different.

His assailant was gone. Had left him minutes earlier with a rapid thudding of footsteps, pulling the gate mostly shut. He’d owned a dog once, years earlier. That crack in the gate would’ve been just enough for her to squeeze through. She’d always been an escape artist. She’d have shimmied her way through that gap and gone rogue for hours, panting her way around the neighbourhood until she’d terrorised every cat she could find. She’d come home covered head to toe in mud. He missed that dog. Saturn, he’d called her. He couldn’t remember the reason. It’d meant something to him at the time.

He didn’t know why he was thinking of that old dog now as he lay dying in his own garden bed. In the end, it was the things that mattered most that sprang to mind. Or perhaps it was simply the gap through the gate had prodded the memory. It irked him, but there was nothing he could do about it since he couldn’t seem to gather the strength to stand.

What would his wife think? Would she manage without him? He supposed the answer to that question didn’t matter, really—she’d simply have to manage, one way or the other. He should’ve taken out more insurance. It’d been on his honey-do list for at least three years.

Something about facing his own mortality kept him pushing it down the list. Meanwhile, he’d painted the fence, fixed the leaking roof, had the carpets cleaned, and built a garden shed from a flat pack. But the one thing he hadn’t done was update the insurance. And, he realised with some alacrity, it was clearly one of the things he should’ve.

His head didn’t hurt now, but his thoughts were muddy. His mind wandered round and round as his subconscious thoughts drifted again to Saturn, then long hikes through mountains and over glaciers with friends he’d left behind aeons ago. Finally, he recalled all of the family ties and friendships he’d thought would never falter that had ended abruptly at various points in his life, and even now, looking back, he didn’t understand why. Perhaps he should’ve asked, although he’d never been one to dwell on the past. If they ghosted him, he’d ghost them right back. Would any of them come to his funeral?

It was too early to get out of bed. The birds had sung for a full two hours and the sun was high in the sky, but still Detective Sergeant Antonia Kauffman had no intention of rising yet. She’d been up late the previous night, working the evening shift that would never end. Too many drunks, too few officers on duty to deal with it all, and so it was left to her, as one of the more junior detectives of the Tweed Heads Police Department, to deal with the kerfuffle going on at the desk.

It didn’t matter that none of the male detectives had to deal with drunks at the front desk. None of them batted an eye over it. She couldn’t say anything, either, because she’d never hear the end of it. They hated it when she complained about unequal treatment, as though she wasn’t one of them after all, despite her protestations to the opposite. But if she didn’t speak up, nothing would change. And so, she found herself at an impasse. She had to say something if she wanted to be taken seriously in her role, but if she did, they wouldn’t take her seriously. It was a quandary she hadn’t found an answer to, and one she wasn’t sure she ever would.

She rolled over in bed and groaned when the snooze alarm sounded.

“You getting up?” Rodger’s voice sailed in from the bathroom. Steam issued through the open door.

“Yep,” she grunted. He was home at least. He’d been out late the night before. In fact, she couldn’t recall when he’d come home. It happened more and more lately.

She rolled over and slung her feet to the floor with a yawn. Then stretching her arms above her head, she let the tension from the previous night work its way out of her shoulders as she leaned to the left, then to the right. At forty-six years of age, she was beginning to notice a shift in her body the way she hadn’t when she started on the force eight years earlier. Everything was harder. Every muscle ached more and for longer after she exerted herself. But at least she was walking, which was more than she’d thought she’d be doing when she was shot five years earlier, on the streets of Sydney. The bullet missed her spinal column by mere millimetres.

With a grunt, she was on her feet and reaching for her toes. No matter what, she always did her stretches. It helped stave off possible injuries. She never used to worry about growing old because it seemed like some far-off distant thing that would happen to a kind, grey-haired, wizened version of herself. Not something that would happen now. She’d only graduated from high school a minute ago, and now she was forty-six years old.

Where had those years gone? They’d disappeared in a haze of study, drunken parties, then sleepless nights with a baby and years of pounding along the streets of Sydney chasing crack addicts and criminals. So much of it was a blur.

She hadn’t stopped to smell the roses often enough—that was the problem, according to her mother. She’d had to point out that there weren’t many roses in crack dens, and if you stopped, you’d be shot or stabbed. Better to keep moving. But Mum had never liked the fact that she’d signed up to be a police officer in the first place. It wasn’t ladylike, not something women should do. She’d have to work with hard men every day, they’d never treat her as an equal, she’d see too much of the underworld, and it would scar her. That was what Mum had said the first day when Toni had been heady with the glow of enrolling.

It’d angered her at first. Mum was being a downer and old-fashioned, and she didn’t know what she was talking about. Eight years later, she didn’t want to admit to her mother that perhaps she’d had a decent point or two. She was too proud for that. But she wasn’t as harsh with her mother these days. She listened to her rants without rolling her eyes and tried to take her advice. That was about the best she could manage for now.

“You going to the station?” Rodger asked, walking into the bedroom still flossing. “Because I could do with a lift.”

“I bet you are. You shouldn’t work so late. It isn’t right—they’re taking advantage of you.” He stood in his boxer shorts, plucking the string from between his teeth and reinserting it over and over as he spoke.

She’d gotten home late, and he hadn’t been there. She wouldn’t ask him where he was last night. They’d only end up fighting.

“You should do that in the bathroom,” she said.

He shrugged. “Always telling me what to do.”

“I’m not trying to be bossy. But I swear I saw a piece of toast fly across the room and land on the doona.”

Toni hated it when he flossed or brushed in the bedroom. It was one of her many pet peeves. In fact, there was very little that Rodger did these days that didn’t raise her ire. She did her best to hide it, but it was harder some days than others.

He disappeared into the bathroom, returning with a scowl. “I guess I’ll ride the bike to work, then. But it looks like rain.”

“You can take the car if you like. I’ll take the bike.”

He tugged on a pair of chinos and a button-down blue-and-white striped shirt. “I’ve got parent-teacher interviews this afternoon, so I’ll be home late.”

“No worries,” she said, undressing for the shower. “I’ll pick up some takeaway if you like. How about Chinese?”

“Sounds good,” he said. “Although, I’m kind of sick of takeaway. Do you think you could make that chicken pie I love?”

She pasted a smile to her face. “Sure, of course I can.” He knew how tired she was, and she still had a full shift of work to do that day. They’d fought so much over domestic chores in recent years that they’d put together a chore chart even though the two of them didn’t have any children living at home. It was like stepping back in time to when Ryker was at primary school. It made things easier—that’s what she told her girlfriends whenever they asked about it. But the truth was, he rarely stuck to it. He usually found some excuse not to contribute to the upkeep of their small two-bedroom unit.