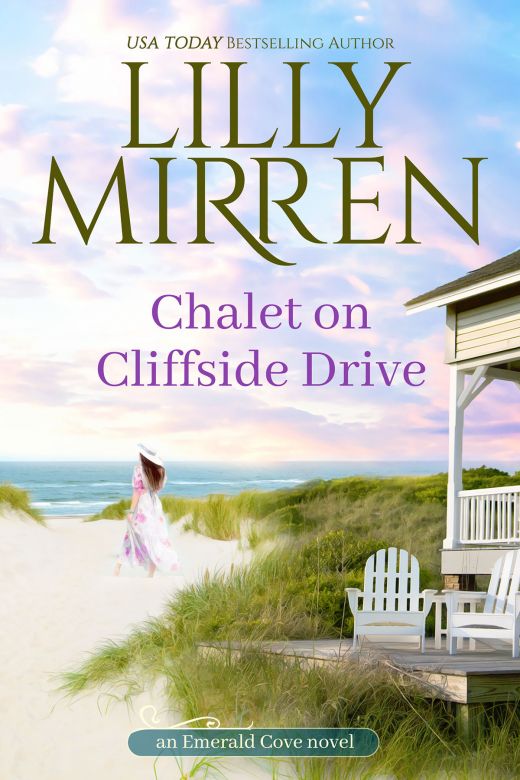 The touching fourth instalment in the Emerald Cove saga from a USA Today Bestselling Author.

At forty-four years of age, Ben Silver thought he’d never find love. When he moves to Emerald Cove, he does it to support his birth mother, Diana, after her husband’s sudden death. But then he meets Vicky.

Vicky Hawkins is younger than Ben, much younger. But there’s something about his earnest brown eyes, the sadness behind them, the depth to them, that draws her in. He becomes her friend, but it isn’t long before she realises there’s more to their relationship than that.

It’s time for Cindy to get on with the rest of her life. She’ll have to decide if the cafe she’s spent her life nurturing will be a part of her retirement or if it’s time for her to let it go.

Sarah finally finishes the book she’s been working so hard to write. But will she be able to rejoin the industry she left behind? Even as she steps forward, she and Mick are considering the next phase of their relationship.

If you haven’t begun this uplifting ongoing series yet, be sure to start at the beginning. Enjoy these moving stories of love, hope, loss and heartache for fans of Debbie Macomber.

Please note: This book is the fourth instalment in the Emerald Cove saga. 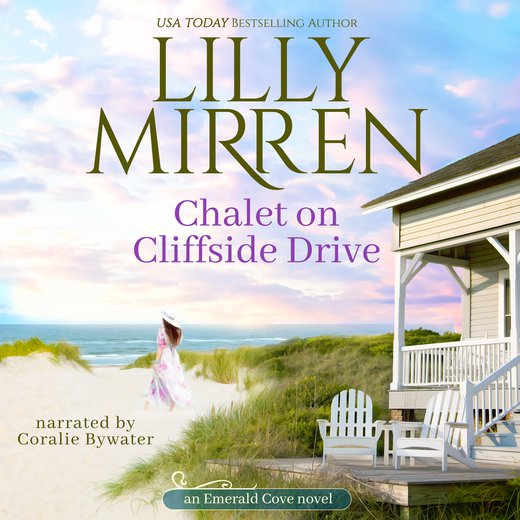 With a backward glance over his shoulder, Ben Silver pushed his bicycle forward and began to pedal. He tucked his head down against the coastal breeze and let the bike glide down the hill to the main road. Squinting behind his sunglasses, he studied the road for traffic, then pulled onto it with a sharp turn and pumped his legs hard, the bike flying as he headed for the beach.

It’d become a favourite part of his daily routine, swimming laps in the ocean. Only, they weren’t laps in the typical fashion, since all he did was swim from one end of the bay to the other and back again to where he left his bike propped up against the log fence that guarded the dunes.

It'd been four months since he moved to Emerald Cove, and he was finally feeling settled. He still hadn’t met a lot of new people, but that wasn’t the fault of the Cove’s friendly residents. More the fact that he was a natural introvert and he worked from home. The IT company he worked for allowed him to travel to their head office in Brisbane once per week for the team meeting, but otherwise he lived and worked in the tiny beachside hamlet—which meant that he only went out into the community to shop, something which wasn’t a favourite pastime of his, or to swim solitary laps in the town’s picturesque cove.

The last time he’d spoken to his elderly parents on the phone, they’d encouraged him to join some community groups, to get out and mingle. But the thought set nerves jingling in his belly. He wasn’t exactly sure how to socialise without it being forced and awkward and about a hundred other nerve-wracking things that meant he still hadn’t done it and wasn’t likely to anytime soon.

He was good at living in his own world, doing the routine things that made up each day. He wasn’t good at stepping out of his comfort zone and meeting new people. Thankfully, he’d gotten to know his biological parents, Diana and Andy, reasonably well in the time he’d lived in the Cove. As well as his cousin, Emily, who’d gone out of her way to make sure he visited her bed and breakfast once per week for morning tea. He was grateful for the effort his family members had made to spend time with him, but after four months he knew it was time he put himself out there, network with some people he wasn’t related to—perhaps even single women. Although he couldn’t imagine there were many his age in Emerald Cove.

The tiny beachside village stretched out before him as he rounded the corner onto the main drag, past the regal old tree with the timber still raw where half of it had tumbled to the ground, crushing the front of the Food Store in the recent cyclone. Workers on ladders with paint brushes in hand put finishing touches on the new white and red entryway to the shop. He looked forward to its reopening—driving to Tweed Heads for groceries every week was putting everyone in a temper, especially since they had to deal with the traffic. As Marg reminded him every time she ran into him, as she leaned on her crutches with a pained expression, one of the reasons she’d moved back to the Cove after uni in the first place was so she could get away from that darned traffic.

He pulled his bike onto the footpath, slowing to a stop before he reached the sand. Then, leaned it in its usual spot against the railing and removed his helmet as he studied the ocean. The angry froth and peaks of the cyclone had been replaced by the Cove’s usual sparkling azure waters and lazy, curling waves. The debris that’d been scattered across the sand was mostly gone now, after a community wide working bee a couple of weeks earlier. The golden sand sparkled beneath the warm, afternoon sunshine.

The sun was lower in the sky than he would’ve liked. Usually, he swam laps in the morning before work, but today he’d had an early video conference, so had postponed it until the afternoon. Although, he hadn’t realised how late it’d gotten. He’d be lucky if he managed to get back before dusk, with the way things were going. A few families still played on the beach. Children ran and squealed at the edge of the surf. Joggers trundled along the hard-packed sand with rhythmic steps. And two Surf Life Savers slowly packed away the flags and other equipment they’d used to monitor the beachgoers throughout the day. He’d have to hurry —it was getting late.

He changed into his wetsuit under a towel wrapped tight around his waist as quickly as he could manage, then settled his sunglasses inside the bike helmet and hung it by the chin strap around the handlebars. As he jogged through the sand towards the water, he prepared his body mentally for the jolt of cold. It was still something he hadn’t quite adjusted to, after living in the warmer northern Queensland for so many years—that sudden dive into the crisp water, the gasp that tried to push its way from his mouth with bubbles that climbed to the surface above him as he kicked through a wave.

He turned to find Mick McIntosh striding towards him, wetsuit peeled to his waist, surfboard hung beneath one tanned, muscular arm.

“I thought that was you.” Mick grinned, holding out a hand for Ben to shake.

“Good. Just coming in from a surf. The waves are a bit slack today.”

“Nice for swimming, not so great for surfing, I guess.” Ben chuckled.

He’d met Mick through Diana—at one of the regular dinner parties she’d attended and dragged him along to, at her friend Cindy Flannigan’s house. There were so many people at those things, all connected somehow through marriage, blood, or friendship, he found it hard to keep track of them all. Mick was married to one of his half-sisters, Sarah.

The family ties were complicated and made his head spin. So far, he hadn’t had much of a chance to get to know Sarah. He was still reeling over the idea that he had siblings after having grown up as an only child, adopted late in life by two wonderful parents. He’d always wanted a brother. He remembered crying over it when he was young and couldn’t push his bike up the hill to the small, brick house where he’d lived. If only he’d had a brother, he’d sobbed to himself while regarding the blood on his gravel-grazed knees, they’d be able to push the thing up the hill together.

Still, he’d been content enough once he understood it would never happen. And now, in a strange twist of fate, it had. Not only did he have a brother, but two sisters as well. He wasn’t exactly sure how to act, what to say or do. So, he waited for their lead in the matter, since they were the ones practiced in sibling relationships.

“Have a good evening, maybe I’ll see you later…” he said.

Mick waved and jogged towards the end of the beach where an outcropping of black rocks lay scattered along the sand and out into the waves. A small parking lot nestled behind it, surrounded by wispy bushes and pandanus. Only a few cars remained on the lot; Ben could see Mick’s truck with a ladder protruding from its bed.

Ben waded into the water, the cool of it causing him to suck in a quick breath. Then he dived beneath a wave, and emerged on the other side, energy already surging into his limbs, his body ready for the task ahead.

He swam parallel to the beach, hands slicing through the water. His body rose and fell with the passing waves, not yet broken but surging towards the sandy shore. He wore goggles to see better, without the saltwater stinging his eyes, so when a shadow rippled across the deep water beneath him, he startled and paused, his head emerging from the water. He looked around, then ducked his head beneath the surface, spinning in a circle. It was difficult to see more than a metre in front of himself, with the swirling sand filling and bubbles rising to the surface from nearby waves.

Then, something grabbed his leg. The impact shuttled him through the water, taking his breath away.

He shouted, reached out for his leg, feeling for what was there. Then he kicked with his free leg and encountered something hard. He spun about, jostled by the attacker, gasping for breath, and saw the fin, even as he kicked again, his foot impacting on a stout, slick body. The pressure on his leg released, but there was blood in the water. His blood. The pain came then, in a wave that shocked him.

He cried out again, as loudly as he could manage, “Help! Shark!”

Faint screams from the beach reached his ears.

Thoughts lay sodden in the recesses of his mind. His breathing came in quick bursts. He couldn’t think of anything but getting to shore. He had to get back to the beach. The pain in his leg grew worse by the second. He pulled himself through the water with his hands, gulping in mouthfuls of water as the waves grew choppier closer to shore.

People on the beach watched him, standing still. A few ran in his direction. One leapt through the shallows with his knees pumping high.

It was Mick. Mick was coming.

He opened his mouth to speak again, but no words came out. Instead, he continued pulling, each stroke bringing him closer to shore. Salt water filled his mouth, making him cough.

Then, Mick was there, curling an arm around him.