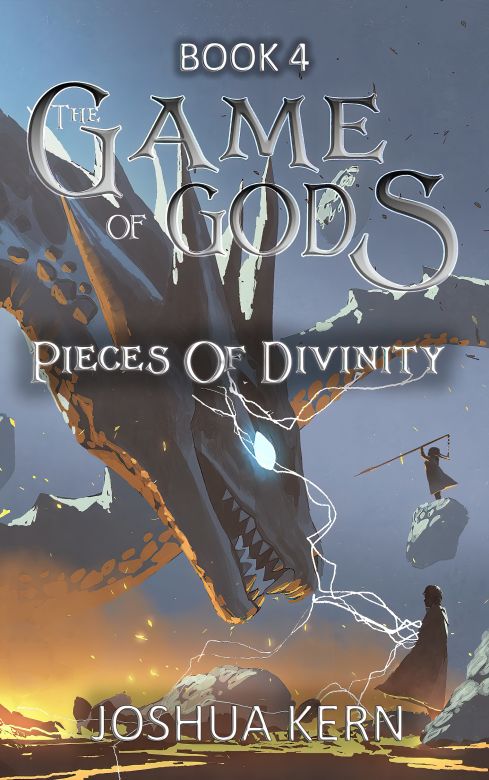 The Game of the Gods has changed hands. Gaia has taken control of the system the gods put in place for their game.Charles and Kira have rescued Alli from the Goddess Alaria and returned to Earth with news of an impending threat. At home, the lack of significant progress on his quest to create more towns is keeping him and Charlotte from searching for their parents.It’s time to change that. A goal Charles and his sister Charlotte have been working towards for months is nearing completion, and with it, they will gain access to the rest of the world.The gods had their chance, and then Gaia took it from them. Earth is hers to control, and it’s time to let the humans know it.The Game of the Gods is no longer what it was, and a new era has begun.

“Gaia is preventing us from creating more monsters from the mana.” One of the many gods pressed against the wall reported. Major and minor gods comprising a myriad of pantheons lined the wall and occupied every available spot.

Much had changed in the almost two months the world spirit had been back, and this latest change was hardly going to be the last.

Bob leaned back in his chair, the shadows of his cowled cloak hiding his smirk. “I know. She feels that there are enough of them now, that they can start mating and taking care of that on their own. The monsters will either survive or die by their own hands, and that of the humans.”

“What else is she going to change? Is it not enough that she took control of something we created?” Another of the angry gods yelled.

Bob felt it better to not tell them about the other changes the world spirit had enacted.

Oddly enough, only the gods sitting around the table, those who were already participating in the game, were calm. None of them seemed to be angry. Why would they be? They had started this entire game in the first place to reclaim their power and stave off the boredom of being immortal, along with also preventing themselves from being forgotten. Three goals that had been thoroughly accomplished already.

Everything after this was purely extra. Sure, the rules were changing, but their powers were returning, and boredom was a thing of the past.

Bob waited for them to calm down before continuing. “It’s time to face the truth of the matter. It is no longer our game, but Gaia’s now. She has wrested near-complete control from us.” He paused to let that sink in before continuing, with what he expected would be polarizing news.

“Also, now that she has taken control of everything, she is opening access to the world back up to the gods. To those who wish to go down and play. Though it does come with certain restrictions and warnings on her part concerning what actions, you can take in the future. Those who go down however forfeit the right to participate in the game and its future iterations.” He explained as calmly as he could to the gathered gods. “And a portion of their divine powers will be sealed.”

He waited for the gathered gods to stop chattering in excitement before continuing. “Any who go down must also swear a binding oath to not do anything against her. It seems she is rightly worried that you all might imprison her again or do something else even more stupid in the future.” For the life of him, Bob could not understand what the gods of this world must have been thinking. How was it ever a good idea to essentially lock the world spirit away and deprive their access to the role they were literally born for?

“What happens to the current champions?” Artemis asked from her spot next to Diana.

“That depends on the gods who chose them. If the gods playing the game stay up here, then nothing. The game will continue with them none the wiser. If those same gods go down to Earth, then the champions that have been chosen will lose any additional powers that they may have received. The gifted weapons will remain with them, but their power will be linked solely to them instead of receiving power from their patron.” There was a reason the champions were so powerful, the weapons they were given were linked to the power of a god.

“Then I will stay. I believe my champion has need of those gifts. For now, at least. She will soon surpass them in any case.” The goddess Leto said with a soft smile, thinking about her champion Alli.

Not all of the gods had passed weapons to their champion, some like Odin or Leto had given them abilities. Others, namely Shiva, had given their chosen nothing. A mistake that Bob was about to correct.

“Odin, I believe it is time you revealed your plan to Sierra. Either tell her how to unlock the abilities you have given her or replace them with a suitable weapon.” Bob slammed his fist on the thick stone table, sending a crack running down its considerable length. “Shiva, you have ignored your champion and given her an ability that has yet to bear fruit. You are to fix that lengthy oversight immediately or I will.” His threat had the fierce Hindu god swallowing nervously. “I understand that things with Apep came to a head right after you made the decision to select her. However, that does not excuse you from neglecting your chosen the way that you have. As it currently stands, Saraswati has done more for her than you have!”

“It shall be done,” He answered simply.

“Good.” Standing from his place at the head of the table, he tapped the broken stone, fixing it with a thought. “I have other matters to take care of, I want to hear who will be going down and who will be staying when I return.”

The crowd of lower-gods pressed together, clearing the way for the High-God to walk past them unimpeded to the door.

“How did they take the news?” The ghostly form that was Gaia’s current representation asked. The shape and form she took changed every time they met.

“Better than I was expecting actually,” Bob rolled a marble-sized version of the Earth in his fingers as he spoke with the grand world spirit. She was no longer simply a world spirit. Being locked away had changed certain parts of her. It was a fact he had yet to reveal to anyone else. Grand world spirits or just grand spirits were a rarity even among the High-Gods.

“Do you think they will try something?” She whispered, almost fearfully.

“Oh, I would count on it, but don’t worry, your power now is far greater than it ever was in the past. I doubt there is anything they could do to hurt you now.” He tossed the marble to her incorporeal form, delighted when she caught it. “Have you finished conducting your experiments on the girls?”

“I finished the last of them the other day. Most of the changes won’t be noticeable to them, but it makes it easier for me and the system you all created.”

“What about that other thing?” He was asking, of course, about the “present” Alaria had sent them when she disappeared from their midst a month before.

“I have been having trouble tracking it. These latest changes should free up the resources needed for me to finally find each of the fragments it now inhabits.” She flicked the marble into the air, expanding its size as it came to rest on the floor. Spread across the North American continent and the surrounding ocean were red dots. “These are the spots I believe they landed in, but I haven’t been able to confirm more than a couple of them.”

“They’ve been hiding from you? I didn’t think that was possible!” Bob exclaimed in surprise.

“Normally it wouldn’t be,” She sniffed in disdain. “It’s a side effect of me controlling the system, controlling everything. I can only process so much information at once, which is why these changes were necessary in the first place. I have no idea how the gods were managing it in the first place?”

The gods had pooled their power together to create the system and then monitored it all together. It was easy when you weren’t actively looking at the little details. Unfortunately, world spirits thrived on those little details. Her own nature had been holding her back. Till now that is, soon that would no longer be the case.

“How much of a problem do you expect subduing them to be?”

“I may need Charles’ help to destroy some of them. I have been preparing my own champion, however. I want to see how much he can accomplish before I ask your little Godling.” She seemed enormously proud of herself for creating a champion of her own.

“That’s good. I believe he should be finishing with his own little project right now, in fact.” The High-God smiled mysteriously as he sent the orb spinning with a slap of his palm.