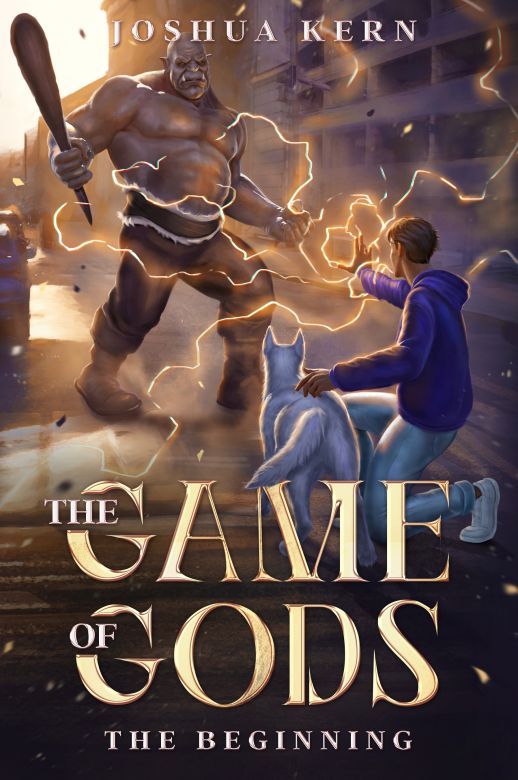 A destroyed world. A man and his dog. The gods are going to have some fun.

Charles woke up late to the apocalypse. The gods of old had gotten bored and decided to redesign how the world worked. Everyone else got a nice little message in their vision explaining everything. Everyone else woke up when the gods decided to make their decision known.

Only Charles got cursed by the gods, and only he gets a visit from one as well. The game and the reasons behind it are not as simple as they first appear. Not that Charles cares one way or the other, he just wants to get to his sister.

The Game of Gods has begun, and the monsters of old are returning to our world. All it took was the death of half the world's population and counting.

What Amazon readers are saying:
★★★★★ 'I enjoyed reading this one. Loved the beginning with the curse. Can't wait for the next one. Great plot great characters.'
★★★★★ 'I like the spin on apocalyptic collapse. The gods amuse me and I find the main character a bit cold and detached which I can relate to.'
★★★★★ 'A good start to an Apocalypse style world. Look forward to see where the author takes us in his new crazy world.'
★★★★★ 'The characters are flawed and realistic with an adorable dog at their side. The magic system is interesting with a refreshing and original twist.'

Please log in to recommend or discuss...
Joshua Kern

“I have grown tired of watching over these foolish humans!” Zeus roared in annoyance. Many of his fellow gods that were gathered around the circular table nodded in agreement.

“What would you have us do? They have all but forgotten us!” Odin replied, one hand stroking Muninn while Huginn rested on the opposite shoulder.

“Speak for yourself, some of us still have worshippers and followers.” One of the gods clinging to the wall of the room shouted.

“Bah,” Odin snorted in derision. “Those worshippers you’re so proud of are nothing more than sheep following the people around them. They don’t truly believe in us anymore.” He finished angrily.

“No, they don’t, but there is something we can do. We can reset the board, we can change everything before we truly are forgotten.” Zeus told them wearily. The long intervening years had not been kind to any of them. Many of them were one comic book or movie away from being forgotten by the masses.

“How? None of us have the strength to do something of that magnitude anymore. Even at the height of our powers it would have proven difficult!” Brigit of the Tuatha Dé Danann, said angrily as she finally rolled the dice waiting breathlessly for it to finish rolling. She got an eleven.

The man at the head of the table was garbed in a large cloak and hood that kept his face in shadow. “You needed at least a thirteen to avoid the attack from the crazed Dark Elf. His strike hits for one hundred twelve damage taking the rest of your health. You have died.” The games Dungeon Master told her with a barely hidden smirk.

Brigit stood in a huff and kicked over her chair. That was the third character she had lost in as many weeks.

“If you worked together with everyone else, you would not die as often!” He told the beautiful and angry goddess. His words doubtlessly falling on deaf ears, playing nice with other people had never been her strong suit.

“Well, there’s an idea!” Shiva interjected in a deep smooth voice. “We could all work together to make it happen. Combine all our remaining powers.”

“Hmm, it could work,” Odin said thoughtfully, his fingers still stroking the silky black feathers of the raven Muninn.

Arinna the Sun-goddess’s softly glowing hands reached across the table and snagged the dice. It was her turn to roll them. “What do we do then? How would we change things?” She asked as she tossed the dice across the table.

Zeus reached out and caught the dice before they could hit the table, ignoring Arinna’s squawk of displeasure. “That’s obvious we turn the entire world into this!” He told them all in a powerful voice as he waved his arm at the table.

Slowly, all the gathered gods began laughing as they caught onto what he was suggesting.

It was unnoticed by the rest when the face of the Dungeon Master upturned into a gleeful grin. Finally, things were about to get interesting. The game of gods was about to begin.