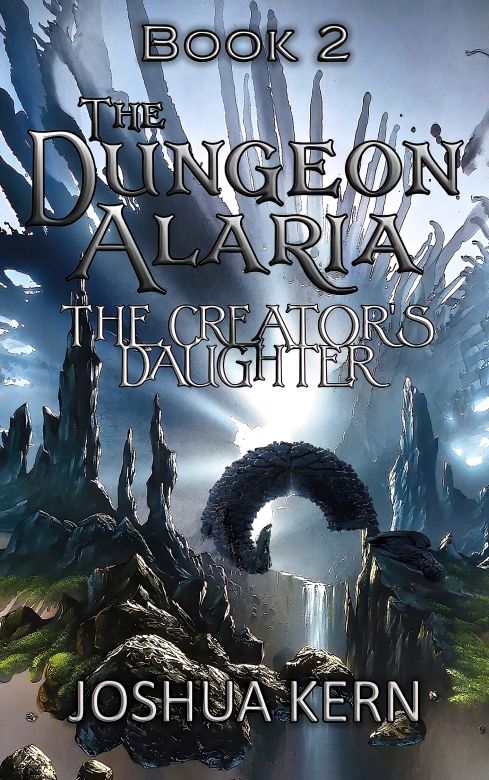 The world of Alaria is about to undergo its largest change yet. Plots created by both spirits, and Gods are coming to a head.
Liam has settled into his new life on Alaria with ease. He has Elli on one side, and the mother he thought he had lost on the other.

Liam has been hard at work claiming the territories in the local kingdom of Alaria, when the dungeon protecting his mothers' capital city is attacked. Meanwhile, Elli is pressing for a more intimate relationship, while barely keeping her own urges at bay.
Together they work to reclaim his mothers' kingdom and push back Euronykis, preventing her from getting a stronger foothold in their territories. The Goddess Alaria is in the midst of her own plans, ones that will affect more than just her world.

Will Liam be able to protect all that he holds dear, or will Euronykis prevail in her plot to destroy the dungeons? Scroll up to buy the thrilling conclusion to 'The Dungeon Alaria' series and start reading today!
This series is set in the same universe as 'The Game of Gods' and contains elements of Gamelit.

★★★★★ 'The characters and interactions are enjoyable and the plot moves forward to a great conclusion. The series could go forever and it would be worth the read, but ended in a great place that will leave anyone as a satisfied reader.'

★★★★★ 'Really don't want the story to end. It's an amazing duology that really needs to become at least a trilogy if not more. I made new friends here and don't want to see them leave.'

★★★★★ ' I recommend this amazing series to my friends, family and anyone interested in a unique fantasy series. The attention to detail Kern puts into the different systems in the book are well thought out.'

The void behind Alli sighed and breathed in explosively. “You shouldn’t have brought her here my dear. It is too happy at her appearance, it knows it will soon be freed. Your little tunnel to Earth only grows stronger and more real with every use. Purposefully transporting someone from there to here just cemented its position.”

Alaria looked behind her towards where the voice originated from with sad eyes. “I know, but this plan has the greatest chance of success. I had to explain it to Bob, and this was his price for not getting in the way.”

It was a plan within a plan, and it was time to free her husband of the dark little parasite that had ridden along inside his mind for millennia.

To the side, Alli stood without moving or saying anything. This was a conversation among Gods, and it wasn’t her place to interfere in it.

Alaria’s husband had finally told why he had created the insidious darkness that even now plagued their world. After sitting in the prison, she had made for him millions of years ago. Seeing their daughter Euronykis going astray had been the final straw. After her first short visit to Earth, he had begged her to listen to him.

Alaria going to Earth the second time had been the first step in the plan they had concocted. A plan that used the tunnel to full effect with everything centering around its existence. It was meant to be an irresistible item, something that would draw the parasites' attention after they cut it out.

Her husband was done being arrogant and trying to solve his problem by himself. Millions of years had passed and still, he had made no progress in removing it. It was a secret that he had been ashamed of, one that he had meant to keep for the rest of eternity.

And then he had heard his daughter going against her mother, believing that she was helping him. It was the last straw, and it broke his pride. He revealed everything to Alaria, his beloved wife.

The worst possible outcome came from that long-delayed conversation. She had been understanding and wanted to help. She hadn’t chosen to abandon him or serve up his corpse to the other Gods. It was an outcome that was natural but had been the one he held the least amount of hope in achieving.

Alaria didn’t comment or even so much as move as he told her a tale nearly as old as their world. A story that he had never told another soul before, it was a story of his greatest shame and unintended consequences. It was the story of how he had accidentally created and then become possessed by another being.

“We had just finished creating the world when the idea first came to me. I wanted to surprise you with a gift. It was meant to be a world spirit for the world we created and then named together.”

Alaria inhaled sharply in shock at his words. “World spirits take time to come into being and can’t be created!”

The void laughed dryly. “I know, but I was impatient and wanted to move the process along faster. I tried to create the spirit myself, needless to say, all those warnings we were given about not trying were right. There was a reason we were told to never try it.”

“I always wondered why our world had never grown a spirit to control everything. I had begun to believe that the miasmic aether was to blame.”

“It is, in a way.” The voice paused as emotions long buried crawled their way to the surface. “The aether is a side effect of the spirit I created, and while it did not become a real, world spirit, it still prevents one from forming. That spirit partially disregarded the world it was meant to inhabit and instead tried to attach itself to me. The aether down on the planet is its attempts to grow in strength and take control of my mind. Over time, it has grown in strength, and I fear that the destruction of the dungeons is its next step towards taking over my mind.”

Alaria spun and stomped on the ground, the force on her rage forcing the artificial moon to shift into a new orbit. “You should have told me!” She roared. “Your stubborn pride has done nothing but hurt our world and our family. Look at Euronykis, our youngest daughter has been taken in by the perverted whisperings of your mistake.”

“I know that!” He yelled back, his powerful voice causing the dust to stir and shoot out into space. “I know what my mistake has cost us, just like I know it is time to rid myself of this parasite before it can become stronger with her help.”

Alaria’s eyes were shut tight, barely holding back the flood of tears that threatened to fall. It had been four million years since she had imprisoned her husband and finally; he was explaining things to her. They had spent countless millennia together before deciding to create their world. This short amount of time was nothing more than a blip to their kind, but it had still been a strain. If he had simply explained everything to her in the beginning, then they could have worked together to remove the mistake. Now that was no longer an option.

“Fine, then we need to come up with a plan, something that will rid us of this being you created.”

Alaria motioned to Alli, urging her closer. “Come, it is time to start your training.” She would fulfill her promise to Bob and train the Elemental Shadow Wolf, it was the least she could do. The havoc they were preparing to unleash on Earth could have drastic consequences. Or not, that world had a spirit after all, who knew how they might interact with each other.

Alli looked down at the planet far below her. “When are you going to let me go down to your planet?” She complained.

“I’m not,” She explained, with a small grimace. “The changes that were made to your world, the same changes that have allowed you to evolve. If I were to allow you to interact with my world, they would begin to infect it like a virus. That is not something I can allow to happen on this world. The monsters are strong enough as it is. Maybe someday I will allow something similar, but not now. No, you will have to stay here for now, with me and with my husband. Together we will teach you everything you need to know and more. When we are done, you will not only be in control of yourself but will be able to help guide Charles.”

“I would like that,” Alli responded, a glint of hope and determination forming in her intelligent eyes. “Let’s begin then, I heard some of your conversation and it doesn’t sound like we will have much time.” Her feelings about their conversation were complex and varied. She was smart enough to realize however that there was nothing she could do. They were Gods, and she was still just a slightly evolved dog. Her time to act had yet to come, but she would prepare for when the opportunity presented itself.

In the meantime, she would learn all she could and more. She refused to be the weight that dragged Charles down and held him back.