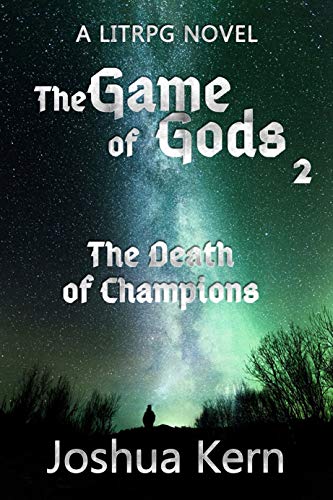 The gods have begun to change Earth, leaving humanity confused and desperate.

Charles and Alli have managed to survive the first week of the apocalypse, unfortunately for them, it isn't over yet. The changes to the world are still ongoing and new monsters are being born. For Charles the only thing that matters is finding his sister, but what happens after?
The enemies of humanity are revealed and begin to unite under the banner of enemy gods.

Champions stand on both sides of the field and it is time for some to die.

★★★★★ 'I've read a few books with gods using humans to play their game, but this series so far feels completely original. I love the characters and the story so far. I can't wait for book three.'

★★★★★ 'So much action, character growth, and entertaining interactions! I especially loved the town building aspects of this book. I can't wait for more!'

★★★★★ 'After reading this book I have come to better appreciate independent authors. The heart and soul of you can easily be read through your books. This book was a great follow up to the first. Great story telling and a wicked cliff hanger. Awesome job.'

★★★★★ 'A great second book in an interesting series. Can not wait til book 3 is finished. Proof that litrpg doesn't have to follow the same formulaic approach to be good.'

Please log in to recommend or discuss...
Joshua Kern

The dark-cloaked game leader and god, Bob, watched as Brigit of the Tuatha Dé Danann grabbed Odin by the back of the neck and dragged him to the corner of the room while his birds squawked up a storm.

“What were you thinking?” She screeched as she batted away Muninn with her free arm. “Sierra is Kira’s enemy, how are they going to work together?”

Odin focused his good eye and pulled her hand away from his neck. “You let me worry about that!” He said confidently as he stroked his beard. “I have a feeling that there is more to their tale than either of them knows. You just make sure that Kira doesn’t kill her, and I’ll do the same with Sierra.”

Clearing his throat, Bob gathered the attention of the remaining gods and goddesses surrounding the table. “Alright then, we have two heroes chosen. The rest of you need to decide on your choices soon as well. Also, Earth is entering the second stage of the change, you all know what that means, so be prepared for the coming changes.”

Hermes rapped his tanned knuckles on the table before stepping back, drawing all eyes to him. “When can we expect the stores and messaging system to come into effect?”

“Good question,” Bob remarked as he shuffled through some papers quickly. “They will come into effect at the end of the week, on the day the game officially begins. You need to make sure you have everything arranged by then. People currently have no idea what to do with the things they get from looting the monsters. We need to give them something to do with it all.”

A knock on the closed door of the room silenced him, as his covered eyes glowed with an unearthly light. “It seems a guest has arrived that I need to introduce. As many of you know, originally, we had no system for dungeons in place. What happened in Kansas City was a surprise to all of us, though I think we managed to salvage the situation.” He moved away from the table and over to the door opening it without hesitation. “I would like to introduce Alaria, the goddess behind the dungeon.”

The room exploded with noise as everyone started talking at the same time. “There is no goddess by that name!” Odin yelled from the corner of the room where Brigit still held him in place.

Alaria looked at Bob with glowing mismatched eyes as she stood in the open door, he gave her a small nod. “It’s true there is no goddess by that name on Earth, I am not a goddess of your world. I come from the world Alaria. When your little game began, a tunnel was somehow created to my world. I followed the tunnel and a dungeon was created as the result.”

Bob slipped past her as she continued to explain her presence, leaving the room behind as he hurried across the hall to another room. He had more to say to them, more that they needed to know. This was Alaria’s moment however, he would speak with them more once the confusion generated from introducing a new goddess to the world had died down. This new room held another grouping of gods, and the atmosphere was notably darker than in the first room.

“Is it time for us to start playing as well?” Set, the Egyptian god of chaos asked impatiently.

Bob settled himself into position at the head of the table before answering. “Yes, they are in the process of choosing their champions among the humans. You may make your selections from among the monsters on Earth. Each of you may choose a primary champion and a backup in case something happens to the first. The less intelligent the monster, the more you may control them. Now, who wants to go first?” His eyes glinted maliciously beneath his hood.

The dead disfigured hand of Hel raised itself drawing everyone’s attention to her frightful visage. Half of her face was a thing of beauty, while the other half was a dead rotting mess of congealed flesh and bone. “I already have a monster in mind.” Her harsh raspy voice announced.