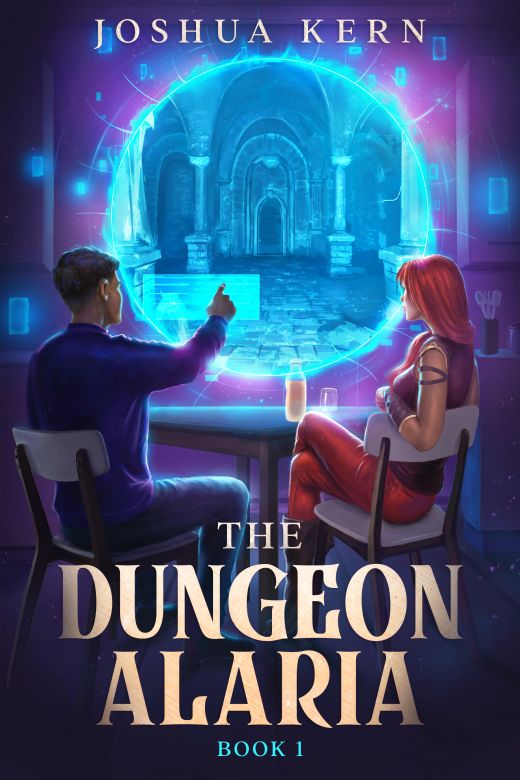 A college freshman. A beautiful princess. A kingdom on the brink.

University freshman Liam was lying in bed when his house started to shake. Two moons appeared overhead and a jungle where his urban backyard had been moments before. Stranded in a new world with only his house and the items inside it, Liam must survive.

Attacked by violent forces, he won’t get far without the help of someone who can give him answers. One such party does exist, the kingdom’s dazzling, wayward princess.

Should Liam hope to survive, he’ll have to save this world while he’s at it.

This series is set in the same universe as 'The Game of Gods' and contains elements of Gamelit.
Book Edited on 12/03/2019

What Amazon readers are saying:
★★★★★ ‘Really enjoyed this take on a dungeon core style. Lots of unanswered questions that have me craving book 2. Can't wait!'
★★★★★ ‘Fast paced page turner with interesting characters that you can instantly root for. I would definitely like to read more about the Dungeon Alaria.'
★★★★★ ‘This author has again put together a great story line. I look forward to wherever it is he will take these characters.'
★★★★★ ‘I like this series as it ties into the Game of Gods a little bit and gives you some story from the other side. I look forward to reading more.'

Two different colored eyes blazed brightly in the darkness causing the shadows to change and coalesce into an ever-shifting form around them. The eyes belonged to the goddess Alaria as she took on the form of a young human female, then an elf, a dwarf, a troll, a goblin, and more. The changes went on smoothly and infinitely, always changing and rarely stopping.

“Something is coming. In recent months I have lost contact with several regions.” She paused, hesitant to admit that she was having difficulty. “The dungeons in each of those areas have been destroyed.”

The void was silent, as it nearly always was but she knew that it was listening.

“I know it isn’t one of the intelligent species we placed there, they all know they can’t survive without the dungeons’ influence.” She continued when it had become clear that there would be no response forthcoming.

With a pained cry, Alaria fell to the marble-like ground, her ever-changing body twitching in pain. “I just lost control of another dungeon, it’s never hurt like this before!”

Her eyes blazed brighter as she gazed down at the planet far below, her lips curled into a snarl as she caught traces of a portal closing. “A portal from Earth just closed!” She informed the sightless void before cocking her head in puzzlement. “The trace I placed there years ago is now on Alaria. There’s been a crossover.”

The goddess climbed unsteadily to her feet; her mismatched eyes blazing angrily. “This is related to that woman; I should never have let her live!” She shouted, clutching at her chest. The force of her screams causing even the heavenly bodies above the planet to shift as if they were trying to run away.

Liam looked at the paper in his hands as he walked down the sidewalk. His second semester at college had only just begun weeks before and already the homework he had been given was ridiculous. His Electrical Engineering class was the main culprit. The professor had them reviewing schematics and circuitry that was light years ahead of what they could understand.

The paper in his hand being a prime example of this, it was supposed to be a circuit diagram of the main motherboard in an mp3 player. Originally, it wasn’t supposed to be something they even studied for another year. The professor in his infinite wisdom, however, decided to accelerate their program without regard to what they had yet to learn.

The sidewalk stretched into the distance broken up by the occasional road as he ignored the bus stop deciding to walk the few miles to his house. Liam needed the calming influence of the fresh air and exercise to calm his aching head before he reached his empty house. He needed to hurry before it had the chance to worsen.

The sound of cars honking and passing him by faded into the background as he concentrated on his homework.

“Have you prepared your soul for what is to come?” A shrill panicked voice shook Liam from his musings, a short-balding man with large trembling eyes stood in front of him. “The end of the world is nigh! The time of the apocalypse is upon us!” Liam shook his head and jogged away, people spouting things like that had been increasing in number recently.

“What are you doing?” The voice of his neighbor Kate brought him back to reality as he found himself standing in front of his house. She was sitting on the front porch of her parents’ house with her hands under her legs.

Liam walked over the grass that had yet to lose its green luster as a fall wind tugged at the paper in his hands. Sitting down next to Kate, he looked at the younger girl, noticing how she was shifting impatiently. “Why are you sitting outside?” He asked curiously.

A smile tugged at her lips as she bounced lightly in place. “I’m waiting for Kira; she’s supposed to be home today or tomorrow!” Kira was her older sister and closest friend despite the large gap in age between the two of them.

“How is she doing these days?” He asked with a barely concealed wince.

Kate sighed as the smile left her face. “She’s doing better, but I’m worried about her. It has only been a few months since she has been alright with staying out overnight.”

Liam had nothing to say to that. He knew Kira’s history and the problems she had faced since the kidnapping. With a grunt he stood and looked back at her. “I think she is stronger than you give her credit for. She wouldn’t have been able to make the progress she has otherwise.”

Kate looked down at her lap, her hair fluttering in the breeze. “Thanks for saying that, you may even be right about her, but I’m still going to worry, regardless.” Her voice was small and laden with emotion.

Stepping back Liam waved the paper in his hands. “Well, I have to start working on this homework so I will talk to you later.” He told her as he hurried back to his house.

He locked the front door and went up the stairs to his room where he dropped the paper on his desk and slid his backpack onto the floor. The sun was shining directly into his room, making everything glow and sending a reflective glare across his TV and computer monitor.

With an annoyed huff, Liam closed the blinds, blocking the rays of light and collapsed onto his bed. His head was pounding as a headache took root with alarming swiftness. The headaches had started to come with increasing frequency years before. Recently they had ramped up to another level that would leave him unable to move and sweating on his bed. He had been lucky to make it home in time, but he couldn’t leave Kate alone like that. She was a good girl and entirely too sweet for her own good.

He reached for the remote next to his bed and turned on his TV as he looked at his watch. His dad wasn’t supposed to be back from the fire station for hours yet. He had to make sure the headache was gone by then. His father wasn’t aware of how bad they had gotten, and he wanted to keep it that way for as long as possible.

Relaxing into the warm embrace of his bed, Liam let his thoughts wander as the TV played an unknown show in the background. Gradually his mind relaxed alongside his body and he managed to do the one thing that always helped when he had a headache, he fell asleep.