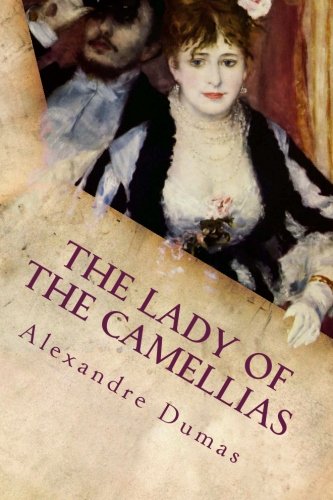 Lady of the Camellias

The Lady of the Camellias By Alexandre Dumas, first published in 1848, and subsequently adapted for the stage. The Lady of the Camellias premiered at the Théâtre du Vaudeville in Paris, France on February 2, 1852. The play was an instant success, and Giuseppe Verdi immediately set about putting the story to music. His work became the 1853 opera La Traviata, with the female protagonist, Marguerite Gautier, renamed Violetta Valéry. The lead heroine is Marguerite Gautier, a young beautiful courtesan who is a "kept woman" by counts and dukes -- men of "Fashionable Society". She meets a young middle class lover Armand Duval who does the unpardonable thing of falling jealously in love with her and breaking all convention of what's expected between a courtesan and her admirers. He, of course, has no way of sustaining the standard of living which she is accustom. Marguerite, despite her past is rendered virtuous by her love for Armand, and the suffering of the two lovers is rendered touchingly. The landmark novel that inspired Verdi s opera "La Traviata," in a sparkling new paper edition "One of the greatest love stories of all time," according to Henry James, and the inspiration for Verdi s opera "La Traviata," the Oscar-winning musical "Moulin Rouge!," and numerous ballets, stage plays (starring Lillian Gish, Eleonora Duse, Tallulah Bankhead, and Sarah Bernhardt, and films (starring Greta Garbo, Robert Taylor, Rudolph Valentino, Isabelle Huppert, and Colin Firth), "The Lady of the Camellias" itself was inspired by the real-life nineteeth-century courtesan Marie Duplessis, the lover of the novel s author, Alexander Dumas "fils. "Known to all as the Lady of the Camellias because she is never seen without her favorite flowers, Marguerite Gautier, the most beautiful, brazen, and expensive courtesan in all of Paris. But despite having many lovers, she has never really loved until she meets Armand Duval, young, handsome, and hopelessly in love with her. In the English-speaking world, The Lady of the Camellias became known as Camille and 16 versions have been performed at Broadway theatres alone. The title character is Marguerite Gautier, who is based on Marie Duplessis, the real-life lover of author Dumas, fils.