It's a pretty routine week for bounty hunter Stephanie Plum.

Headless bodies have started appearing across town in Trenton, New Jersey. At first, it's just corpses from a funeral home and the morgue that have had the heads removed. Then a homeless man is murdered and dumped behind a church. Stephanie Plum knows that she's the only one with a prayer of catching this killer.

If that's not enough, Diesel's back in town. The six-foot-tall, blond-haired hunk accepts no limits - that includes locked doors, closed windows and underwear. Trenton's hottest cop, Joe Morelli, isn't pleased at his arrival, nor is Ranger, the high-powered security consultant with his own plans for Stephanie.

Jersey's favourite bounty hunter is stuck in the middle with more questions than answers. Who is behind the startling epidemic of mutilated corpses? And is the enigmatic Diesel's sudden appearance a coincidence or the cause of recent deadly events? 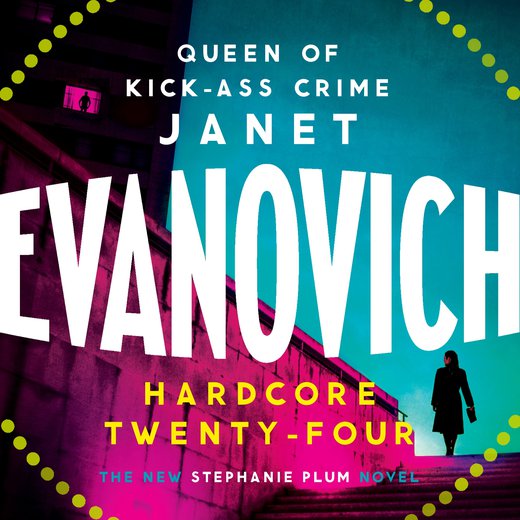 Simon Diggery and Ethel, his pet boa constrictor, were up a tree about fifty feet from Simon’s rust bucket doublewide.  Ethel looked comfy draped over a branch halfway up the tree.  Simon looked like death warmed over.  He was scrunched into a crook a couple feet below Ethel.  He was barefoot, wearing striped pajamas, and his grey hair was even more of a mess than usual.

My name is Stephanie Plum. I work as a bond enforcement officer in Trenton, New Jersey, and Simon was in violation of his bond.

Simon is a professional grave robber.  When he gets caught robbing a grave my cousin Vinnie is his bail bondsman of choice.  Vinnie posts a cash bond guaranteeing the court that if Simon is released he will return when scheduled.  If Simon doesn’t show up on time, I’m sent out to fetch him.

I was presently standing a respectable distance from the tree, looking up at Simon, keeping a watch on Ethel.  I was with my sidekick, Lula.

If Lula was a pastry she’d be a big chocolate cupcake with a lot of frosting.  I’d be more of a croissant with a ponytail.  I have curly shoulder length brown hair, blue eyes, and some people think I look like Julia Roberts on her day off.

“Simon,” Lula yelled.  “What the heck are you and Ethel doing in the tree?”

“I been up here since last night,” Simon said.  “I’m afraid to come down on account of the zombies.”

“I wasn’t drinking,” Simon said.  “I was working my trade at that cemetery on Morley Street last night, and I accidentally dug into a zombie portal.”

“Say what?” Lula said.  “I never heard of no zombie portal.”

“It’s not widely publicized that they exist.  Mostly people in my profession know about it.  It’s an occupational hazard.  I only dug into a portal once before, and I was able to beat the zombies back with my shovel, but this time was a whole other deal.  There was too many of them, so I ran for my truck and took off.  Only thing is they tracked me down.  They got a real good sense of smell.  They’re like raggedy bloodhounds.  They come at me when I was sleeping.  They wanted my brain.  That’s what they kept saying.  Brains, brains, brains.  I’d be a goner if it wasn’t for Ethel.  She don’t like getting woke up, and I guess zombies don’t like snakes.  Anyways I was able to get away, and Ethel and me climbed this tree.”

“You got it,” Simon said.  “Zombies only walk straight ahead.  They can’t back up neither.”

“You were supposed to be in court first thing this morning,” I told him.

“Well excuse me,” Simon said, “but I had bigger problems.  “Suppose I was able to get to court, and the zombies followed me there, and they ate all the people’s brains who were in the court?”

“This is Trenton,” Lula said.  “You might not notice.”

I cut my eyes to Lula.  “There are no zombies.”

I blew out a sigh and looked back at Simon.  “Here’s the deal.  You come down, and we’ll protect you from the zombies.”

“You gotta either chop off their head or shoot them in the brain,” Simon said.  “That’s the only way.”

“I got a gun,” Lula said, shoving her hand into her over-sized imitation Jimmy Choo bag.  “It’s in here somewhere.”

“What about Ethel?” Simon said.  “If I stay in jail awhile until the zombies forget about me, who’s gonna take care of Ethel?”

“You’ll have to make arrangements,” I said.

“I don’t got no one,” Simon said.  “My cousin Snacker is in West Virginia, and my neighbors would chop her up and fry her in bacon fat.  You gotta promise to take care of Ethel.”

“Me neither,” Lula said.

“She’s no bother,” Simon said.  “You just gotta feed her once a week.  Just come in and leave her a groundhog or something.”

“They don’t usually sell groundhog in the supermarket,” Lula said.

“I get them from the side of the road,” Simon said.  “Ethel don’t care if they’re swelled up or anything.  She likes fried chicken too.  And she wouldn’t stick her nose up at a pizza.  And if worse comes to worse I keep a bag of rats in the freezer.”

“You got electric?” Lula asked.

“Course I got electric,” Simon said.  “This here’s a civilized neighborhood.”

“How are you going to get Ethel out of the tree?”

“I got some hotdogs,” Simon said.  “I’ll leave a trail of hotdogs that goes straight to the kitchen.  And then once she’s inside we’ll lock the door.”

Ten minutes later Simon had the hotdogs all laid out.

“She don’t look interested,” Lula said, staring up at Ethel.

“It could take a while,” Simon said.  “She don’t move so fast.  I guess we could just leave the door open for her.”

“You could get robbed if you do that,” Lula said.

“I got a fifty-pound snake for a pet,” Simon said.  “Nobody comes near here excepting the zombies.”

I cuffed Simon, loaded him into my SUV, and drove him to the police station.  I handed Simon over to the cop in charge, and Simon explained that should a zombie show up, the cop needed to shoot the zombie in the brain.  The cop assured Simon it was a done deal.