If you want to read gripping stories that don’t rely on sex, swearing, and graphic violence—you’ve come to the right place!"The Dance of Swords" by Bestselling author JC Kang"Geiger's Escape" by Kajetan Kwiatkowski"Perfectly Painted Lies" by Brittany Rainsdon"The Best Chocolate Cake Has a Touch of Bitter" by Alice Towey"Veins of My Sister" by Marie CrokeExtended sample chapters for novels:"Dragon's Reach" by JA Andrews"Small Magic" by NYT Bestselling author Terry BrooksDEEP MAGIC is an electronic magazine that publishes clean short fiction in the fantasy and science fiction genres (epic, paranormal, steampunk, etc).

The Dance of Swordsby JC Kang

After the foreign dictator had cut off peace negotiations, the only way for my delegation to escape this occupied city was for me to murder him.

From where I knelt on a silk cushion, I lifted my gaze from the two flimsy swords at my side to where First Consul Geros lounged. I’d vanquished the world’s last dragon with a song yet couldn’t charm this mere man.

My stomach twisted as all resolve faltered. As a musician, I’d never harmed anyone in my eighteen years. How could I transform myself into a cold-blooded killer?

From across the knee-high table, Geros’s mismatched eyes met mine. His gray iris, the same shade and sharpness as anodized steel, unnerved me less than the brown one. Though made of glass, the Eye of Solaris’s enchantment forewarned him of attacks. His gaze fell on the ceremonial blades.

He snorted. Daring me to try.

And why not? Coming from a warrior race cursed to a short life of thirty-three years, he loomed a head and chest taller, his monstrous frame at least twice my size. He’d likely killed hundreds of enemies in combat even before my birth. While the scar marring the olive complexion of his right cheek had come from a blade, foundation now covered my small acne scar.

Forget resolve. I didn’t have the skill to hurt him.

Not with the gray pendant pinned to his toga, guarding him against the magic of my Dragon Songs.

My pulse skittered like a tentative rabbit. The acupuncture treatment to settle my nerves from a few hours ago was wearing off, bringing into clarity the foolishness of my plan. I’d offered to perform as a way to separate him from his guards.

He’d accepted the offer, despite the Bovyan people’s notorious disdain for the arts, no doubt to isolate me as well.

Still, I couldn’t betray weakness to this tyrant. I closed my eyes, letting the gentle thrum of my handmaiden’s zither settle my racing heart. By prearranged agreement, both his and my guards waited outside the hilltop vista, halfway down the slope. They could see everything but stood too far away to intervene. In here, it was just me and two handmaidens.

Lying sheathed in a double scabbard on the marble floors, just within reach. . .

But useless without the magic of a Dragon Song giving them strength.

With no way to balance out his advantages in size, skill, and experience, the odds looked bleak. No, it would be foolish to even try. There had to be some other way to escape, without gambling on a desperate attack—one which would leave a stain on my soul even if I somehow succeeded.

I opened my eyes to find him ogling me. His wolfish grin left no doubt as to what he wanted. His eyes roved over me, as if formulating a plan of attack with my body as the battlefield. My only defense was a maroon gown with gold-embroidered borders and the gold pin that held up my hair.

And the two swords, which weren’t meant for actual combat.

I was powerless and trapped. The calm I had felt from the acupuncture all but slipped away. Maybe I should have ordered my doctor to sedate me, to keep me from embarking on this foolish endeavor in the first place.

Stomach juddering with somersaults, I shook the terrifying thought of being pinned beneath this dictator out of my head. Disguise strength in weakness, my ancestor had written. In these dire circumstances, it meant acting demure and deferring to the male ego. It was all part of my upbringing anyway.

I could do this.

But first, he needed to lower his guard. What better way than for me to serve? With my left hand holding the end of my right sleeve, I leaned forward to the tea set on the table. I lifted the kettle and poured into his eggshell cup. “Please,” I offered with a bow of my head. “Admire the tea’s color and savor its aroma before taking a sip.”

Eying the cup with a frown, the consul pushed it back across the table. “You first, my lady.”

Such vulgar behavior. Still, the situation required hiding my disgust and fitting his image of the weaker sex. I lowered my head while still maintaining coy eye contact through my lashes. Covering my mouth with a hand, I softly laughed. “First Consul, it is not our custom to poison even our most hated foes when serving them tea. And while Cathay and the Teleri Empire have our differences, we are certainly not enemies. But if you insist.”

I took up the cup in both hands, reveling in its warmth. I closed my eyes and let in a long sniff. My shoulders relaxed and my concerns unwound. I could do this.

Bringing the cup to my lips, I took a sip. I returned the cup to the table, with an unfortunate hint of red from my lip balm.

As I reached for the kettle to fill the unused cup, Geros snatched up the one I had just sipped from. The contrast of his large, rough hands emphasized the dish’s delicate lines. It was a miracle he hadn’t crushed it between his stout thumb and forefinger. Holding my gaze the entire time, he emptied it into his mouth and gulped it down without so much as pausing to savor its scent or flavor. He wiped his mouth with his sleeve, then thrust the cup onto the table and grinned.

Barbaric. To think such uncultured brutes ruled over the world’s largest empire. To think my homeland could be their next target. 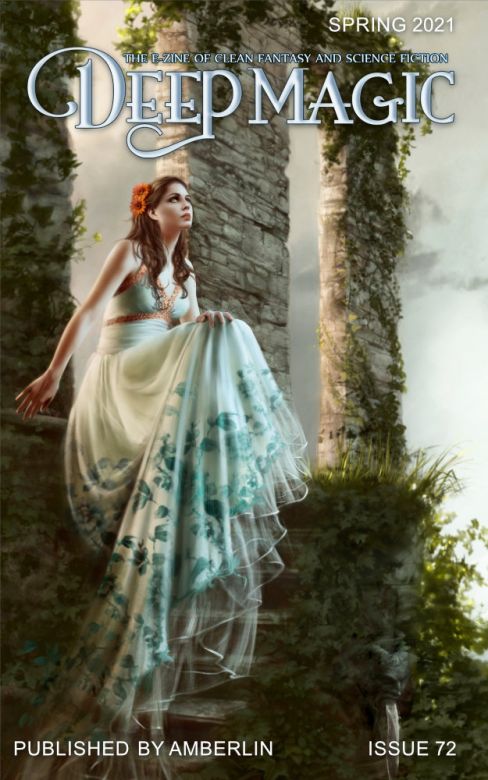