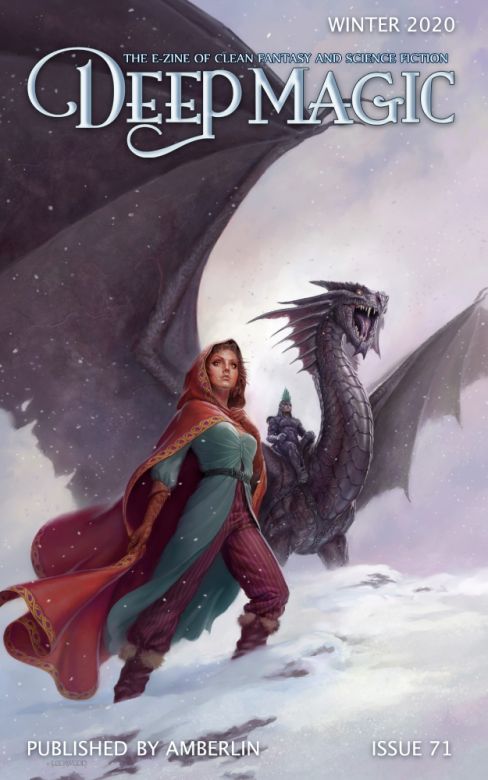 Venya made art with needle and thread—hooks and yarn. Lace and tapestry designs filled her imagination. However, demand for such in the ice-harvesting village of Durmont only slightly exceeded the need for butterfly wranglers. Venya spun wool from her dwindling flock, knitted caps and sweaters, and darned socks. Art yielded to need, much as it had for all of her seven decades in the north.

A knock on her sturdy door disturbed dust motes in the slivers of light that slipped through gaps around the frame. She would need to tack new wool strips around it before winter arrived in earnest. Her deft fingers gripped the gnarled staff that served as her stability and security. Releasing the latch, she leaned on the staff with its carved memories and winced.

In the open doorway shivered little Linford Bluett, muddy pantlegs frayed above boots that were broken at the toe, and woolen socks split to allow a bluing big toe to peek through both. His canvas coat sleeves dripped.

“Come in, child,” Venya said. “Settle near the hearth and take off your boots and socks if you can.”

Linford nodded and scampered to the rug near the fireplace. “Your home was closest, Grandmum.”

Venya was no more a grandmother to this child than she was to any other in the village, but she welcomed them all to call her Grandmum since she had been blessed with no children of her own. Even though Linford’s family was new to the area, he already knew her by this name. “Closest to what?” she said, putting a kettle of water over the fire. She took his wet coat and hung it on a peg where her husband’s coat normally hung.

“The river bottoms,” Linford said with a shaky voice.

“Oh, dear,” Venya said, “you’re turning to ice.” Giving no thought to the mud it might collect, Venya wrapped her thickest afghan around Linford’s shoulders and called out to the back room of the home. “Franklin, would you help us at the fire?”

A modest clatter announced Franklin’s entrance. Tufts of white hair adorned a mostly bald pate, growing like bunchgrass clumps made of cotton. The broad smile on the old man’s face contrasted with a backbone as crooked as his gnarled staff, which, like Venya’s, bore intricate carvings. Only one blank space near the tip had not been carved. “Who is us? Company, yes?”

Venya scooted a three-legged stool near the boy’s feet. “Fetch the lamp, Franklin, and you will see that this is Linford Bluett, and by the looks of him, he fell through some ice and got soaked to his thighs. His fingers are too numb to help pull off his boots and socks, but they both need mending. Would you be an elf and cobble a repair on the toe of this boot?”

“I haven’t shrunk that much, my dear,” Franklin said with a gleam in his eye as he pulled a stick from the fireplace and set its glowing end to the wick of their good lamp. The resulting light revealed the boy’s fading pallor and involuntary shaking. “By the looks of him, you might put a pot of broth on the fire as well.”

Venya nodded and crowded their iron pot onto the grate next to the kettle. “That was last night’s broth, but it’ll warm soon enough.” The boot squeaked loose, and before long, both boots sat on the hearth to dry. The socks soaked in a basin of hot water. “Once I scrub the socks, I’ll set to mending the one with the hole.” She worked the socks in the water until she was satisfied, and then she considered the bowl. “The water looks clean enough to soak your feet in.” She helped Linford put his shivering feet in the warm water.

“Feels like a hundred pins!” He lifted his feet out of the water, sloshing some on the floorboards.

“Try again, slowly putting in one foot at a time,” Venya said.

“Sorry about the mess,” he said with a dry husk of a voice.

“No worries, child. While your socks are drying, why don’t you tell us why you were crunching through thin ice at the river bottoms.” Venya pulled a basket near and selected a needle and ball of yarn.

Franklin checked the boot in need of repair, but he returned it to the hearth with a frown.

“Then why did you?” Venya asked as she threaded the needle and set to work on the toe of the sock.

Linford tugged the afghan around himself, but he said nothing. At least a hint of color returned to his cheeks.

“Bet it were for a girl.” Franklin chuckled as he pulled a small mallet and box of tacks from the workbench in the back room.

Venya had not heard him go back there. The old fellow was a sliver spryer than she credited. “Don’t tease, Franklin.”

“Were it, lad?” he asked earnestly as he returned to the hearth.

“For certain not,” Franklin said with a wink.

Linford shook his head. “Joneth stole Elsie’s basket and kept it from her. She’d spent all morning gathering nuts.”

Venya nodded. “Snow will cover them all soon enough. Good to put up what you can while you can.”

“I tried to help, but Joneth threw the basket out on the ice before I could fetch it from him.” Linford looked down. “Thought it was shallow. Thought if it cracked, I’d just get a wet foot.”

“There’s a smart lad,” Venya said. “It’s good that you came here. You wouldn’t have made it to your home in the valley.” Venya shook her head and then leaned down close to Linford. “And that’s not the only reason it was good.”

“Why else?” asked Linford. “Because of the broth? It smells good.”

“The yarn I used to mend your sock is very special. I will explain why while you fill your stomach with some bread and broth.”

She stood and used her staff to walk over to the kitchen cupboard. Putting a crust of bread on a plate, she added a small bowl and returned to the hearth. The broth was thin and brown, but it smelled like a roasted rack of lamb as she ladled it into the bowl. “Sorry, but that’s the last of the bread.”

Linford’s sounds of delight as he ate a bite of broth-sopped bread made Venya smile, adding only the happiest of wrinkles to an already well-mapped face. She held up the other sock, wrung out the little moisture that remained, and clucked her tongue. “If we don’t do something about this small gap, your other big toe will stick out before winter reaches its coldest.” She pulled out her yarn and needle.

Franklin sat on the hearth next to Linford. “Let me show you how to mend this boot so that you might be able to do it yourself next time.”

Venya darned the small gap in the sock with swift, steady pulls. “Young man, I want to tell you about my special yarn. Can you listen to my story and also watch Franklin?”

Linford swallowed hard, his cheeks now back to an almost healthy hue. “Yes, Grandmum. Your broth is delicious.”

Venya smiled. “The yarn, then. I spin all of my yarn from the wool our sheep provide. Recently, their numbers have dwindled as winters seem to grow longer each year. Fewer sheep means less wool and less yarn. Can you see how that would be a problem for me?”

Linford nodded as he wiped his mouth, having just finished the broth from the bowl.

“Last week, I knew I was not going to have enough wool or yarn to last the winter. We were down to three sheep.” She leaned closer to Linford, trying to read something in his eyes, before continuing, “I explained this to the sheep.”

“Of course,” Venya said as though it was normal as the dew in springtime. “Certain sheep make better conversation than some men.” She arched an eyebrow at Franklin, who was too busy tapping tacks into the boot to notice.

Venya finished darning the second sock and set it next to its mate on the hearth. “The strangest thing happened when I finished telling the sheep I was about out of yarn. Violet, my oldest sheep—who hasn’t born young in three years—walked right up to me and told me something I will cherish to the end of my days—”

“Wait,” Linford said, holding his hands up. “Did you say the sheep talked to you?”

“Do you want to hear what Violet said?” Venya smiled, enjoying the warmth of the hearth on her back. Seeing the young man continue to nod, she said, “Violet told me she had lived more days than ever she wanted. She said life at the cottage yard had been good. In gratitude for our care of her and her lambs, she wanted to give me a gift.”

Linford shook his head. “What gift can a sheep give?”

“I’m getting to that,” Venya said, concern lines starting to crease her brow. “She said she wanted to sacrifice herself so that we would have a nice fleece to make yarn and food to survive the winter.”

Linford’s half smile faded. He said nothing.

“I should have warned you that there is sadness in this story,” Venya said. “I apologize for that.”

Franklin finished the boot and returned it to the hearth by the socks. He patted the young man on the shoulder.

“You told her no, didn’t you?” Linford asked in the dry husk voice.

Venya took a deep breath. “Before I could have even rejected her offer, Violet knelt in front of me, closed her eyes, and passed away.”

“However,” Venya said, “there are some important things to learn from this story that you have not yet considered. Violet wanted to give herself to people she loved. Her sacrifice would allow us to live through the winter. We would then be able to care for the other sheep—her lambs. Often, the hardest part of service and sacrifice is not the giving, but the accepting.”

“The yarn you used on my socks came from Violet’s fleece?” Linford asked.

“Yes,” said Venya. “That is what makes it special. There is power in such a sacrifice when one gives a part of oneself. It is a form of magic.”

“Magic is not real,” Linford said.

Venya smiled. “It is as real as talking sheep.”

The boy shook his head.

“Let’s make a bargain,” Venya said. “You wear your mended socks and boots through this winter and if they do not keep your feet as warm as my hearth on the coldest of days, I shall agree that there is no such thing as magic. However, if they do keep your feet warm, you keep your heart and mind open to the magic of sacrifice and love. Fair?”

“Fair.” Linford looked over at Franklin, who was carving the image of a kneeling sheep into part of the blank space on his staff. “What are you doing?”

Franklin smiled at him. “Let me ask you a question first and then I’ll answer yours. What do you think is the oldest thing in this home?”

Linford looked around, furrowed his brow, and said, “You?”