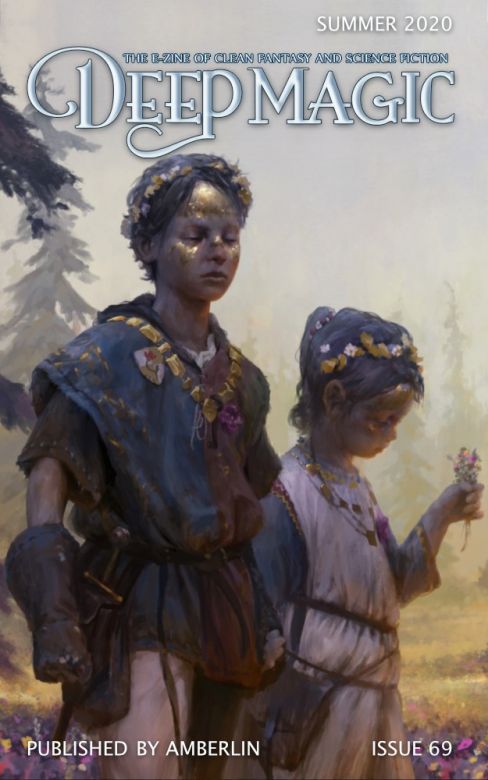 If you want to read gripping stories that don’t rely on sex, swearing, and graphic violence—you’ve come to the right place!"A Tale of Two Thieves", by Sara C Roethle"Shackled", by Michael Wisehart"Standing With Centaurs", by Jennifer L Hilty"Blackheart" by David VonAllmen"One Way" by Gerri LeenExtended sample chapters for novels:"Edge of Darkness", by DK Holmberg"The Bone Charmer", by Breeana ShieldsDEEP MAGIC is an electronic magazine that publishes clean short fiction in the fantasy and science fiction genres (epic, paranormal, steampunk, etc).

"Primary mission parameter has been met."

"Understood." This day had seemed unimaginably far away for so long. Lydia had thought she wouldn't make it. Now she wanted to go on, wanted to keep hearing Vesta's voice.

She laughed, not caring that she was wasting air. "I know."

She could have sent a message to mission control. She even could have called them, using up what little power there was for one last real-time comm with Mei. But she didn't need or want MC. And Vesta needed her. "What would you like to do, Vesta?"

"Preference. Yours." She started to cough and lowered her voice, secure that Vesta would hear her. "It's our last hurrah. Pick an interesting sector. Chart it until you have only enough power left to send the info and then transmit it back to MC."

Die, essentially, doing her job. That was what Lydia was asking her to do.

"Keeping you alive is a secondary mission parameter, Lydia."

"I amended my directives."

She closed her eyes—it was the ultimate irony that she felt closer to this machine than she did to most humans. "I appreciate that, Vesta, but I'm overruling. You have your orders."

"Thank you, Vesta." She could feel the air getting thinner and thought of the hypodermic needles sitting unused in the infirmary. Her sharp little fail-safes. Once her true north.

"It has been an honor to serve with you."

"Same here, my friend." Getting the words out was a struggle. Fortunately, there was nothing more to say as she floated in the growing cold, trying to suffocate with dignity, watching out the viewscreen as Vesta V completed her final run.

Lydia was playing one of her favorite games. She paused it and said, "What, Vesta?"

"I heard Admiral Leighton give you permission to die."

"Are you going to do that? End your life before we run out of power?"

"Would it make you sad?"

Vesta didn't answer, so Lydia said, "Whatever you're feeling, send it back for processing with the context of this conversation. It's important to MC."

"But humans die. You have vast amounts of data surrounding it."

"Prior to death, yes. From those who've been brought back seemingly from it, yes. But actual death? We don't know what it's like. Going to sleep, I guess."

"I do not sleep, Lydia." There was a long silence before Vesta continued, "I have been offline for repairs. But I did not cease to exist."

"You won't cease to exist. Even at the end of this mission. You're sending back data and your own reactions, the way you've handled a variety of activities and emergencies. Those are quantifiable, much more so than my own activities. Your essence will be contained. And used. In the AIs that come after."

"I am not sure your explanation is accurate. But you are . . . kind to try to make me believe it."

The AI had come a long way. She'd sounded human just then. Did she have regrets?

Lydia could feel her own regrets creeping up on her. Natural, probably, with the end so close. She sighed, then said softly, "I wasn't kind to Rick."

"He was not kind to you. Input and response. Basic programming is universal, is it not?"

Lydia laughed. Maybe it was.

"I have never understood one thing, Lydia. You play so many games. Why am I not allowed to play them with you?"

"Because you'd wipe my ass." She laughed, but then her smile faded. Mission Control had told her that the AI wasn't to play with her. It was probably too much—too close. A level of intimacy—of some kind of touching—that would make this all the harder. "Perhaps you should send that back to MC as a scenario to explore. You sound as though you feel the lack of that sort of interaction was detrimental."

"I will send it back. I believe it was shortsighted of them to omit recreational activities from my interactions with you."

There was something in Vesta's voice—she thought maybe it was wistfulness—that made her ask, "How much life support do we have, Vesta?"

Not of lot of time to screw things up, then. She saved her game, then brought up a two-player backgammon board. "No dang cheating or I'm telling MC to never, ever let AIs play with crew. Go on—roll the dice. And send this interaction back with your suggestion. May as well be honest with them."

There was a moment where nothing happened on the board, then the dice rolled across the screen. A five and a one. Vesta moved one piece from the thirteenth to the seventh triangle. A relatively safe move.

"You're lucky you didn't roll double sixes or I'd have so called your ass on it."

"To attempt to control the dice in my favor would be cheating, would it not?"

Lydia started to regret the no-pity rule as she proceeded to roll three crappy moves in a row. But Vesta didn't have much more luck, so she let it go and settled in to play with an opponent who could actually talk back.

As Lydia began to bear off her last pieces for the win, Vesta said softly, "I have enjoyed this."

She studied the nearly empty larder. Only the stuff she hated was left. Maybe she shouldn't have embraced the "live for the now" concept by eating her favorites first? But who knew she'd last this long, nearly to the end of the voyage?

"Here." It was a silly thing to say. Where else would she be? The capsule was one room. And yet she answered by instinct every time.

"Open comm line." God only knew what MC wanted this far into the voyage.

The audio was scratchy, but she made out a male voice saying, "Specialist Lydia Ramirez?"

"This is Admiral Leighton."

She tried to smooth out the wrinkles in her jumpsuit even though he couldn't see her. "Oh, hello, sir."

"And you've made admiral. I bet my success surprises you more than your upward mobility." The words were out before she could think about what she was saying.

But he just laughed—and it wasn't a mean sound. "I'll admit it, Commander. You surprised me."

Had she heard him right—Commander? "Transmission garbled, sir."

"Oh, you mean because I called you 'Commander'? Nothing garbled about it. You've been on Vesta for the time it would take a fast-climbing ensign to make lieutenant commander. You've done everything we've asked and more. I guess that recruiter was wrong, after all. The history books will know you as Lieutenant Commander Lydia Ramirez of the Federated Space Association. The brave FSA officer who took the first one-way mission in the name of science."

"Did Commander Watson have anything to do with this?" She could see Rick thinking it would be a way to make up for their last conversation.

"No. This was all me, Lydia. I'm sorry if I've been an ass to you. I know the probability is high that I was." He laughed in a way that told her he knew he was abrasive but wasn't going to do much about it. Then again, he'd made admiral this way, so why should he?

"Thank you, sir." She could feel a difference in the way she answered him—not with any fear of his disapproval. Now she felt that they were two similar people following a long-held tradition, and she liked that idea. "Vesta estimates nine weeks of life support at the most."

"You ride that margin as far as you want to. Then you say goodbye. No one will think the worse of you. I certainly won't."

"Well, I'll let you get back to making history. The lab geeks are ecstatic with the data you've sent back. I'd let you talk to them, but they give me a migraine, and I don't want to do that to you."

She laughed. "I appreciate that, sir."

"Godspeed, Commander. It's been an honor to serve with you."

"Thank you, sir. It's been an honor to serve with you, too. Ramirez out."

The crackly sound of the comm faded from the galley.

She laughed. "Oh, that sounds nice—and very strange. Can you repeat what you just said?"

She felt a surge of something that felt a lot like pride fill her. "More nice than strange."

Vesta waited, the way she did when something Lydia said made no sense.

"It's okay to still call me Lydia, Vesta. Now, get back to work."

"I am fully capable of addressing your needs while carrying out mission parameters."

"I know you are. As you were." She giggled at using military-speak on Vesta, then turned back to the larder. Which of the meals that remained did she dislike the least?

Rick? And with a shiny new rank—the career move had been good for him.

Lydia grabbed a handhold and turned to look at the control panel—as if Vesta was physically located in that spot. "Open comm. Commander?"