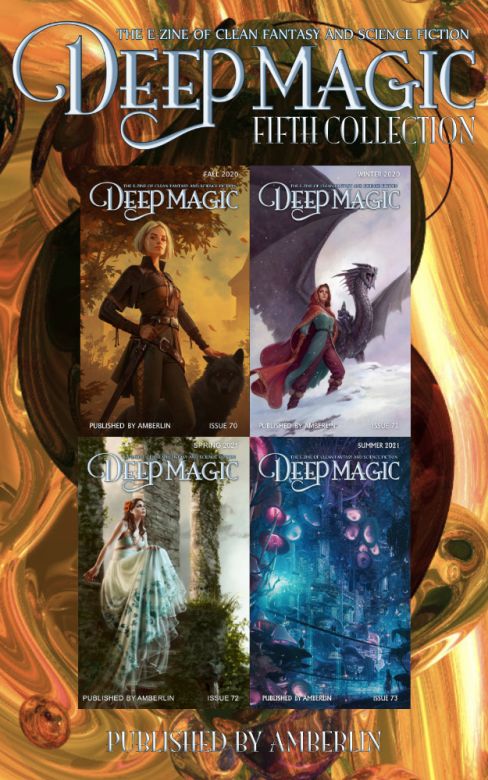 If you want to read gripping stories that don’t rely on sex, swearing, and graphic violence—you’ve come to the right place!This collection represents the short stories featured in Deep Magic e-zine: Fall 2020, Winter 2020, Spring 2021, and Summer 2021. It includes stories by authors such as: Jeff Wheeler, Wulf Moon, Charlie N. Holmberg, Susan Ee, JC Kang, and Michael J Sullivan.This rich collection of short fiction would be a great addition to any fan of excellent fantasy and science fiction.

The Best Chocolate Cake Has a Touch of Bitter

Marigold folded her arms and checked that she had all the ingredients on the counter: flour, sugar, butter, eggs, buttermilk, a basket of fresh berries, and lastly, the richest, darkest baking chocolate she could find.

The thought of her best friend caused a physical pain—a tightening that started in Marigold’s stomach and spread through her body, tensing her shoulders and clenching her hands into fists. She remembered last night’s argument, and the fact that Juliet was almost certainly leaving town tonight, and she thought she might start crying again.

She shook her head and wiped nascent tears from her eyes. She had already spent half the night sobbing, and today she had work to do if she wanted to finish this cake in time. She tied her apron around her waist and reached for her measuring cups.

Marigold and Juliet had met on the first day of kindergarten.

Marigold had been so excited about starting school, anxious to finally learn real magic. Desperate to make a good impression, she had begged her parents for a spell; her father had tried to teach her a simple charm to cast an illusion of flowers blooming in the air, but despite weeks of practice, the best she could do was create a faint image that was only visible if you squinted.

That first morning, she had worn her best dress, a vibrant green that her mother said looked nice with her red-brown hair. She sat at an empty desk and watched the other children arrive: the Jefferson twins, a pair of unruly boys; a shy girl named Renna who lived two houses down; pretty Amy Cheng. Suddenly the room quieted as a slight girl with long, thick black hair walked in. She wore a red dress and bright black boots, and a flock of butterflies circled her head.

After class, Marigold stood outside the school, pretending to fix her shoe, watching the other students leave. The butterfly girl walked out, surrounded by a crowd of chattering girls, and Marigold’s heart fell; of course such a magical girl would be popular. But as the girl stood on the threshold of the school, blinking in the afternoon sun, she ignored the chattering blond girl next to her. She strode purposefully over to Marigold.

“I liked what you said today in class. About being named for a flower that looks like the sun.” Her blue eyes were dazzling up close. “My mom just named me Juliet after some book she read. That’s all right, I guess. But there are marigolds everywhere, and whenever people see them, they’ll think of you.”

This would be the perfect time for Marigold’s spell. She put her hands together and tried to focus her mind on the image of a golden flower, like her father had taught her. But then Juliet held out her hand, and a beautiful monarch, orange and black and vivid, fluttered up from her palm and flew away.

Marigold smiled to hide her dismay. She dropped her hands, hoping that Juliet wouldn’t notice the faint outline of a drooping flower in the air above them.