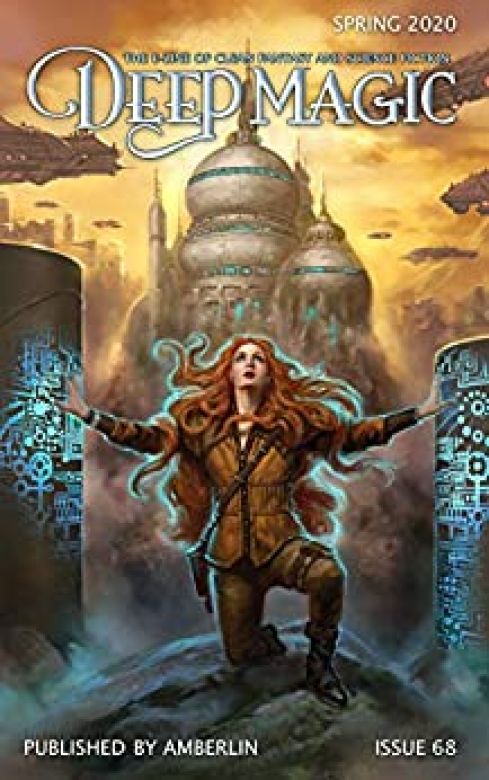 If you want to read gripping stories that don’t rely on sex, swearing, and graphic violence—you’ve come to the right place!

"Before the Journey", by bestselling author of the Benjamin Ashwood series, A.C. Cobble
"Seb Dreams of Reincarnation", by Aimee Ogden
"Mama Cascade" by Samantha Mills
"The Space Between" by Larry Hinkle
"Sorieul's Eyes" a Muirwood story by WSJ bestselling author Jeff Wheeler

"Sisters of Shadow and Light", by Sara B. Larson
"Sunshield", by Emily B. Martin

They unplugged Seb’s neurodes at the end of his ten-year tour of duty. He’d known it was coming, had been told before he ever signed the contract that if they left him in any longer, his health would start to deteriorate. What they hadn’t mentioned was that his health would deteriorate anyway.

Once, Seb had kept six hundred people alive, responding instantly to their needs, and their wishes too when those fell within his power. He had carried them all in his belly, made them part of himself. He thought he would implode under the emptiness of having lost them.

Today, his only job was to leave his apartment: something he hadn’t done since the first week he’d moved in. He had groceries delivered, the occasional takeout, odds and ends as he needed them. Supermarkets and corner stores might as well have been on another planet. If they were, he might have actually cared to visit them. He stared out his ninth-floor window while trying to summon up a reason to go out, let alone the will to do so. His fleet-assigned shrink had given him the task and called it homework. Which was of course the exact opposite of what it actually was: out-of-home work.

He paced the length of the living room a few times, until the 3D printer on his telemedicine kiosk chirped: his painkillers had printed. He dry-swallowed his pain pills and walked to the apartment door before he could think twice. No one else was in the ninth-floor elevator lobby, and Seb jabbed his finger into the interface to call for a ride to the ground floor. Once the door opened, he realized he should have put on a jacket. Too late—the two women already in the car stared at him as he hesitated. He ducked his head and took a place in the elevator’s front corner, as far from them as possible. Not a peep from either woman as the elevator dropped groundward, but their eyes burned on the neurode stumps that stood out at the base of his skull and the back of his neck. He imagined he could feel the photons pinging off him and into their greedy retinas and tried not to laugh. Phantom photons to go with his phantom limbs. He should have gone back for a jacket. One with a high collar and with thick padding to hide the swells of the additional stumps that traced the contour of his spine.

When he made it out of the downstairs lobby, evening shaded the street outside. Gaudy displays advertised burgers, sushi, movies, liquor. Seb’s head swung back and forth, trying to force a familiar constellation to appear from the pattern. He should have planned a route before departure. Burgers, then. That was closest.

Tires screeched as he stepped out into the street. Three cars abreast, one for each lane, came to a stop. Each of them maintained the same precise ten-foot stopping distance. Behind them, more traffic began to pile up. A woman in the middle car set aside her laptop and lowered her driver’s-side window. “This isn’t a crosswalk,” she yelled. “Are you impaired or something?” Seb fled to the far side of the street and crashed through the doors into the restaurant he’d chosen.

The boy behind the counter at the burger restaurant stared at Seb. “Welcome to Marilu’s,” he said finally. “Can I—”

“Burger.” Seb realized too late that he was interrupting. So slow, waiting for the clerk to invite him to order. Much faster, much better, to just shoot the data to a waiting computer that would have already started up the grill. “Fries. Chocolate malt.”

The boy’s eyes grew, and he prodded frantically at the interface on the counter in front of him. “Uh . . . cheese on that burger?”

Seb held out his handset to pay.

The boy tried again. “Was that a small or large fry? And the shake?”

Again Seb shook his handset in the direction of the interface. The boy pressed a few more keys, and Seb’s handset vibrated against his fingers to let him know the payment had been processed. “That’ll be right up,” the boy said, and rushed off. Seb retreated to a bench by the door to wait.

A man and his young daughter stood opposite him, in the corner between the door and the counter. Waiting for their own order, maybe, or for someone to come out of the bathroom. The man studiously watched the diners in the half-empty restaurant, but the girl’s eyes hung on Seb. She had violet irises—a favorite mod before Seb had left Earth, and still lingering around, apparently—and she was chewing wetly on the tips of her mittens. He wished she would stop that.

But when she finally did let go of the mitten, it was to pester him with a question, and an altogether too familiar one at that. “Did it hurt?” she asked. A tiny piece of blue fuzz clung to her upper lip. “When they put those neurodes in you?”

He didn’t correct her juvenile pronunciation—noo-rodez—and he didn’t answer her question either. “It hurts now,” he said, and the girl’s father bent down and whispered something in her ear. She didn’t ask anything else, but she kept staring at him while she masticated the blue yarn of her mittens. Seb thought about leaving without his food. He wondered what his doctor would say about that, if he told her about tonight’s adventure at all. But finally another man appeared, and the trio stepped out hand in hand into the evening.

Only another minute until the teenager behind the counter reappeared with a folded paper bag and a dew-beaded cup. “Here’s your order.” But he didn’t set the food down on the counter or hold it out when Seb approached. “My sister is an ore transport,” he said, and his voice cracked. “She’s got eight years left in her term. Do you think she—”

“I don’t know your sister.” Seb didn’t want to hear the end of the boy’s question. He reached out and snatched the bag out of the boy’s hand. His crude clumsy fingers slipped on the wet cup, and it crashed to the floor. Gobs of chocolate ice cream spattered the tiles, the counter, Seb’s shoes. Seb left it there, left the gaping boy, and fled to the comforting, oppressive walls of his apartment.

None of it was the fleet’s fault, not really. They had given him an apartment and a pension that would let him live comfortably for the rest of his life. They had set up the telemedicine kiosk on the kitchen counter, between the electric kettle and the wall. They even scheduled the consults for him—the pension was conditional on his keeping those appointments, in fact. An ex-implantee had offed herself not long after the program had launched, and now they kept close tabs on their alumni. Suicide was bad for recruitment, though that first death hadn’t kept Seb from signing on.

He wished he had a tele-med consult with his psychologist today, and at the same time, he was glad he didn’t. He sat in the darkness for a while and listened to the great nothingness all around him. Downstairs, a baby was crying, was always and forever crying, and there were raised voices somewhere down the hall too. He’d thought that the extra noise would help with the—what did his doctor call it? The “readjustment”—but instead it set his teeth on edge. It was just a reminder that there should have been so much more.

He hadn’t finished the hamburger, but the grease still lingered unpleasantly on his tongue. He went to the bathroom and took out his toothbrush. No mirror over the bathroom sink—none anywhere in the apartment, in fact. It was the only instance of redecoration he’d undertaken. Each time he glanced in a mirror, he expected to see the great curving hull of a starship arching away behind his back, and each time that absence tore him open like a speeding microasteroid fragment.

Seb stayed up too late at night. Returning to the habit of sleep had been a challenge; ten years of sleep-diversion tech had put his former life’s seven-hours-a-night routine out of reach. It wasn’t as if a starship could settle down for a few minutes’ rest, not with all the lives depending on it. So the years and years of stim had taken their toll on the old physiology too. Seb settled for a few hours each night, in fits and snatches. Just long enough to cycle through a set of dreams. A biological necessity, like a bowel movement; a means of dispelling mental waste rather than physical.

And there was so much waste to dispense with. Dreams of navigation maps and split-second course corrections. Dreams of power fluctuations and crew management. Dreams of Saturn’s rings shattering sunlight a thousand different ways. Dreams of the bustling hive inside him, back when he was much more than a single ticking heart, a pair of wet, fluttering lungs.

He preserved the hamburger wrapper to show the psychologist during their next talk. An absurd little badge of honor, but she praised his progress—he left out the staring little girl and the final encounter with the anxious clerk. “I’m proud of you,” she told him from the tele-med kiosk’s glossy screen. Seb couldn’t remember her name; he only ever called her doctor, and if she’d noticed, she’d never mentioned it. “I imagine that wasn’t easy to do?”

“I guess not.” He managed not to glance at the time displayed in the top center of the screen.

She shifted to a different navigational bearing. “Have you given any more thought to a new hobby, like we talked about? A way you can spend your time, Sebastian?”