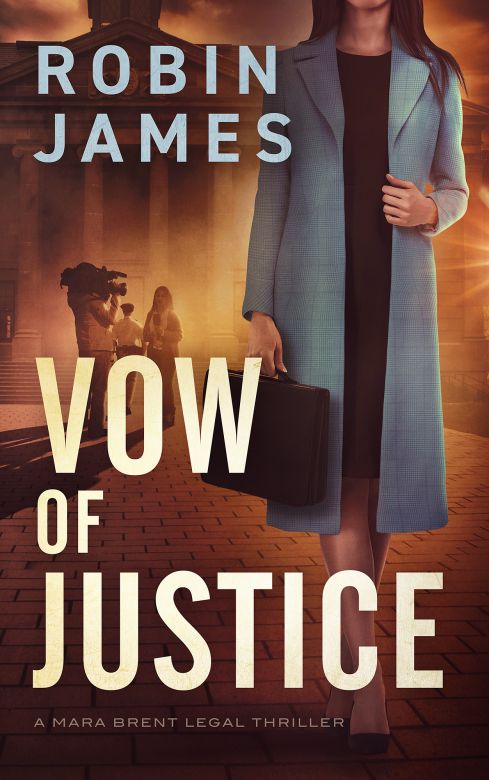 A small-town sheriff is found murdered in a Dollar Kart parking lot. A lone prosecutor vows to bring his killer to justice.

Sheriff Bill Clancy humbly served the citizens of Maumee County for three decades. He wanted nothing more than to finish his term and retire to the woods he called home. When he’s found shot to death behind the wheel of his own car, every cop in the county is out for blood.

The weight of justice falls squarely on Prosecutor Mara Brent’s shoulders when an arrest is quickly made. With an election just a few months away, all eyes are on her. There’s no room for error.

The man accused is a nobody. A drifter without a dime to his name. There’s a mountain of physical evidence tying him to the crime, but no obvious motive. Even without one, the case seems open and shut. But when a high-powered defense attorney with ties to Mara’s past comes forward to defend the killer, she suspects a conspiracy.

Is the accused just a patsy? Was Sheriff Clancy’s assassination part of a larger scheme that could ruin Mara’s career? Or was Clancy hiding an even bigger secret that could shake the foundation of the police department he vowed to serve?

And just when Mara thinks victory is in sight, a courtroom bombshell threatens to spiral the town into chaos.

Everyone tries to read something in the eyes of the jurors. They file in, one by one, staring either straight ahead or letting their gaze flick to the center of the courtroom. If they look at the defendant, does it mean they believe he’s innocent? If they look away, does it mean they cannot face him, knowing they voted to take his freedom or his life away? I can tell you. None of it means anything. Not until we hear those words scribbled on a sheet of paper.

Guilty. Not guilty. Every single time, no matter the answer, it sends a rush through me. A release.

Today, there were eight men. Four women. Young. Old. Everything in between.

It had taken them eight hours to decide one man’s fate. They had the power to put him behind bars for the rest of his life. He would never see the sunlight except through razor-wire again. Or they could let him go so that I would feel like I was the one going to prison.

It wasn’t what he planned, this defendant. Once upon a time, he meant to do good; I think. He’d come from nothing. An abusive father. A mother who abandoned him for her addictions when he was just a boy.

He’d starved. Fought. Survived. Suffered in ways that made him hard.

He’d done more than survive. He had thrived. He had protected his younger sister, earning enough money so that when he turned eighteen, he rescued her from Foster care too.

I knew she wouldn’t fall apart this time. Though he had been the one to save her, she’d learned how to survive long before.

I turned to her. She’d gone rigid as the jury filed in. Each of them found their seats and turned to face the judge.

“Have you reached a verdict?” the judge said to the foreman. An older man. A former history professor. He had wispy white hair and glasses perched at the tip of his nose.

“We have Your Honor,” he said, clearing his throat.

The judge’s clerk reached for the small scrap of paper that would decide the defendant’s fate.

I felt as if I’d floated outside myself. How many times had I waited for a verdict like this one? Hundreds. It never got easier. Ever.

I heard the defendant take a sharp breath. He turned his head, searching for me. Should I meet his eyes? Give him some small comfort?

In the end, I knew I couldn’t. This was his fate alone. As linked as I was to him, this was his life, not mine. Not anymore.

The judge opened the folded slip of paper and read the verdict. He made a note on a pad he kept in front of him. His face betrayed nothing. Judge Dudley had sat on the bench of the United States District Court for the Northern District of Ohio for twenty years. The only member of it who hadn’t sought an appointment to a higher court. One of his colleagues was now a Supreme Court Justice. They’d gone to law school together. Still played bridge together with their wives once a month.

Dudley handed the paper back to his clerk. She settled herself in front of the microphone and read the words aloud.

I didn’t know I needed comfort. But when Lieutenant Sam Cruz touched my hand with his pinky, I latched on to him. I threaded my fingers through his and squeezed.

He was handsome, wearing a tailored three-piece suit. His thick, dark hair had gone grayer in the last year. It made him look like his father. The man who set him on the path that led him here today.

“We, the jury, in the above-entitled action, on count of one of the complaint…”

She rattled off sections of the statutory code. Those the defendant stood accused of violating. There were seven of them all told. She would read his verdict one by one. “...find the defendant guilty as charged.”

Lieutenant Cruz’s grip hardened, matching my own. It got hard to breathe.

The defendant didn’t move. He became a statue. His head held high, he waited as the clerk read the rest of the verdict form.

Lieutenant Cruz exhaled first. “We need to get you out of here,” he whispered in my ear. “It’s going to be a media circus. I’ve got something worked out with one of the marshals. They’ll clear a path for us and keep the vultures at bay.”

I nodded. I couldn’t feel my feet. My brain buzzed.

He turned to me. I should have left the moment Sam told me to. Instead, I felt rooted to my spot.

The defendant. Jason Brent. Father of my only son. The man I had once vowed to spend the rest of my life with. When he met my eyes, he lost all color.

“Wait,” Jason said. He leaned in, whispering to his lawyer, Stoney Gregg. I knew the man’s retainer was more than I had made in a year. He’d successfully defended one of the mob’s most notorious kingpins last year. But today, he came up short.

“Mrs. Brent,” Gregg said, turning to me. “I’ve made arrangements. You can have five minutes to speak with your husband in private before he’s taken away.”

“What are you going to tell Will?” he asked. Will. My twelve-year-old son. For months, I had tried to prepare him for this day. He knew what his father stood accused of. He’d been following the trial online, even though I tried to prevent it.

Explain. How could he possibly explain in a way that would make sense to Will?

Congressman Jason Brent had just been convicted on seven counts under the RICO statute. Fraud. Money laundering. Embezzlement. And worst of all, conspiracy to commit murder. No. There was no way to explain any of this. Jason would not take responsibility for any of it.

“I’ll decide if and when Will is ready to see you,” I said. “On the advice of his therapist, that won’t be for a long time, Jason.”

“That’s enough,” Sam said. He stepped in between Jason and me. Only, I didn’t need his protection. I’d taken away Jason’s power to hurt me a long time ago.

“Jason?” Kat came up behind me, sobbing.

Her wife, Bree, was by her side. Bree caught my eyes. She would take care of Kat today. It would be my job to break it to Will.

“Let Kat have your five minutes,” I said. “We have nothing more to talk about.”

I turned my back on Jason. As I walked away, I heard him saying pretty words to his sister that she needed to hear right now.

“This way,” Sam said. He was right. The hallway thronged with reporters. It would be even worse outside.

“Thanks for this,” I said. “I never even thought this far ahead.”

Sam smiled. “That’s what you keep me around for.”

We made our way to a service elevator. As the doors opened, two maintenance workers stepped off. There was a leak in the women’s bathroom. Sam gave them a terse smile, then ushered me into the elevator. He waited for the doors to close before turning to me.

I looked at him. Sam. My friend. We were still trying to figure out whether we could handle being something more. Jason’s trial had forced me to put my personal life on hold. My focus was on Will. Always.

“I don’t know,” I answered honestly. “It’s not like that verdict came as a shock. The evidence against him was airtight.”

“He should have taken a plea deal,” Sam said.

“He should man up,” Sam said. “Set aside whatever money he still has to secure Will’s future. Instead, he’s going to blow every cent chasing freedom he’ll never get. He’s guilty of all of it.”

I touched Sam’s sleeve. “I know. And thank you.”

The elevator doors reopened. We were on the first floor. As I stepped off, Sam took my arm, guiding me down a different hallway.

He was as good as his word. As we stepped outside into an adjacent alley, an unmarked black Explorer pulled up. Sam’s US Marshal friend rolled down the window.

“We parked your car right over there,” he told Sam. “Take the side street off the alley and you should be good.”

“Thanks,” Sam said. “Give us one second though.”

Sam had his phone out, reading a text. He pulled me aside, frowning.

“Some reporters have camped out in front of your house. I’m gonna send a couple of deputies out there to try to scare them off.”

“If they’re on the road, there’s nothing to be done about it. Will’s not there. He’s staying with my mother in North Hampton for the week.”

“Good thinking,” Sam said. “So…maybe it’s better if you don’t go straight home either. You can…I’ve got a guest room. Why don’t you crash with me?”

The offer floored me. It was sweet. Generous. But also fraught with complications.

I let mine go to voicemail as Sam took a few steps away from me and answered his call.

He said hello. Then nothing for almost thirty seconds. His face, however, went through a myriad of changes. Finally, he doubled over and let out a sound that speared me.

“Sam?” the Marshal said, seeing the same thing I did. He turned off the ignition and stepped out of the car.

“No,” Sam said to his caller. “She’s still with me. Just…get the scene secured. Nobody in or out. We’re on the way.”

Sam’s hand shook as he clicked off his call and slipped his phone into his breast pocket.

“What is it?” I said, my pulse quickening.

“We have to get back,” he said, his voice breaking. “It’s…Sheriff Clancy. Bill Clancy.”

He couldn’t get the words out.

“Okay? Why does the Sheriff need you back so quickly?”

Sam shook his head. “He’s dead, Mara. They found him. Shot through the head. Sheriff Clancy’s been murdered.”