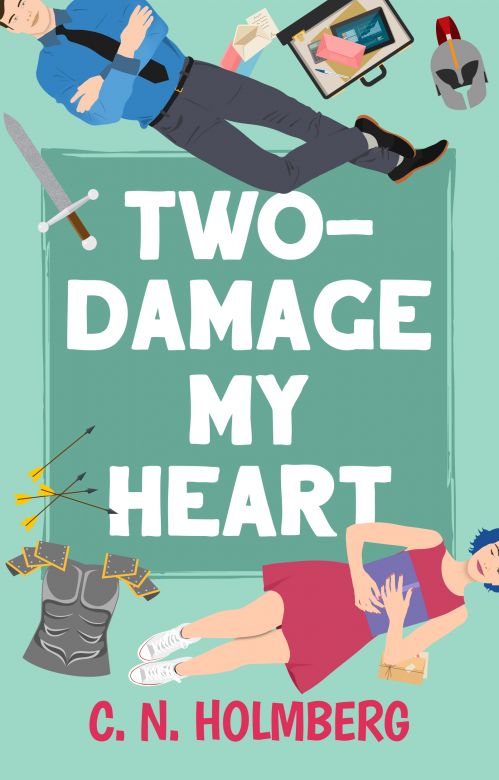 Eight years ago, Rue Thompson fell in love with her brother's roommate. From across the country, he started writing her letters out of the blue-letters that encouraged her, amused her, and healed her.

Then he ghosted her and broke her heart.

Fortunately, Rue's now stone-cold heart protects her from anything that dares make her feel, except when she's live-action role-playing with her friends in the park. When in costume and wielding a foam sword, Rue can be whatever she wants.

But then the boy-now most definitely a man-suddenly reappears in her life and shows renewed interest. The catch? He doesn't recognize her. Apparently eight years and new hair masks all wounds. But Rue remembers everything. No amount of make-believe can change that. She's taken enough damage, thank you very much.

But this time, Landry Harrison plans to convince Rue he's leveled up-even if it means dressing up in tights and a cape to prove it.

Please log in to recommend or discuss...
Charlie N Holmberg

When my parents asked me to clean out my old room, I thought I’d walk in to find my childhood in pristine condition, not an episode of Hoarders.

I supposed it was a little of both. My childhood—more so my uneasy adolescence—was still here, it was just pushed to the sides to make room for lots of boxes. Not moving boxes, mind you, which were slowly dominating every other room of the house, just boxes of stuff stored away until Mom could figure out what to do with them. The first cardboard treasure chest I peeked into had old grade-school homework assignments from Wyatt, my older brother. The second had a nostalgic bunch of old dishes I hadn’t seen since before puberty, along with a buttload of mismatched silverware. After getting my daily exercise hauling half the boxes into the hallway so I’d have room to pack what was actually mine, I got to work.

Everything of actual use moved out with me roughly six years ago, when I finally decided to strike out on my own at twenty-one—in part because I didn’t want my conservative parents and religious brother knowing I was taking advantage of my newly acquired drinking age, though booze turned out to be less fun (and way more expensive) than the TV shows promised. Shortly after that I met one of my best friends, Blaine, and moved into my current house with her, though she’d moved up to Washington to be with her sick mom a year and a half ago. Which was great, because I got to upgrade from the basement apartment to the main floor, but it also sucked because I loved Blaine, and the house was real quiet without her. A married couple rented the basement now, and I didn’t really mingle with them. Newlyweds tended not to mingle with anyone but themselves. At least, that was the case with the newlyweds in Happy Valley, and I’d spent my entire life here, so I didn’t really know anything different.

I turned slowly, taking in memories stirred by the anime posters and concert tickets pinned to the walls, ruining the yellow-painted drywall underneath. I’d painted my room yellow my senior year of high school because I thought it might help me with my depression. You know, since it’s “happy” and stuff. It didn’t help, but—surprise—pills and therapy did, once I was able to get my hands on them.

I’m good, now. But the cheerful yellow brought up sour memories. Pulling my eyes from it, I opened up a trash bag and started ripping memories off the walls. Not in an angry or even cleansing way. I just wasn’t into Sailor Moon and One Piece anymore, and Aqua hadn’t made new music for . . . ​decades.

I never played with Barbies, but I sure did like that song.

Once the walls were clean, revealing all the pin-sized holes I’d put into them, I taped up the bottom of my first box and moved to the closet. One look had me retrieving a Sharpie and labeling the box GW for Goodwill, and many clothes I no longer fit into went into that, along with their hangers, because unpacking hangers is the literal worst. My parents were downsizing. Downsizing meant fewer hangers.

I chucked old shoes, pausing on a pair of red heels. I didn’t own any red heels. I didn’t wear heels much, because bunions, and everything fun in my life involved a lot of running or a lot of skating. But I started a new box of things to come to my house in Lehi, and those heels christened it.

“Oh yeah,” I murmured as I pulled out a flail shoved behind my shoes. Yes, a flail. A spiked metal ball on a chain. I’d gotten it at the Renaissance faire when I was a teenager (possibly lied about being eighteen to make the purchase). I dug around a little more, finding a small dagger (complete with thigh strap) and a short sword with a pearl-studded handguard. I could never use these at Herospect, even as flavor for my costume, but maybe they’d look decent in a wall display. Heaven knew my walls were still painfully bare. I just didn’t want to spend money on decorations, and so far all the cheap stuff I’d seen in discount store aisles didn’t really speak to me.

The weapons went into my “keep” box.

I Goodwilled a bunch of belts, threw out some random trash, then stumbled across three shoeboxes full of letters. “Huh,” I mumbled as I broke the Scotch-Tape seal with my nail and opened it. I thought I’d thrown out all of these.

An old birthday card, which had glittered all over everything else in the box, sat atop the mess. I opened it, reading through short and sweet messages from my family, before thumbing through the rest. Most of them were greeting cards, but there were a few old postcards from my once-upon-a-time pen pal in Japan, and my acceptance into the University of Utah. They were nice tokens, but not meaningful enough to keep in the long run. Setting the first box aside, I opened the second one.

Letters from North Carolina stared up at me, addressed in my brother’s nearly illegible handwriting—not that mine was much better. I smiled as I picked up a few, then froze at the fourth in the stack, a shiver coursing up my arms and down my back, almost like the damn thing was enchanted.

The name on the return address read Elder Harrison.

I’d definitely thrown these out. Did I miss some, or just misremember?

Pinching the envelope in my hand and ignoring the thump beneath my ribs, I released a long, stale breath. Elder Harrison. Landry Harrison. He’d been my brother’s roommate for a few months when Wyatt decided to join the LDS Church and serve a mission proselyting to strangers for two years. I was dedicated to writing Wyatt, and I guess Landry noticed, because he’d started writing to me.

His first letter arrived at the beginning of my renaissance, for lack of a better word. I was nineteen, finally out of the public school system, finally benefiting from interventions for my crippling depression. I could see the light at the end of the tunnel, and the timing of this letter from some random Mormon seemed fated. Having a sudden new friend, a new listener, and new letters to look forward to had honestly helped, despite his horrendous spelling. Landry Harrison had written me for a full year before going home to Florida and completely ghosting me.

But I was not going to dredge that up now. It was seven years ago, I was over it, and this letter could burn in hell for all I cared.

I dropped the entire box into the awaiting trash bag. As if to stick it to me, that letter from Landry slipped out and stared up to me, calling out with my parents’ address, and my name: Samantha Thompson.

Part of my renaissance had been changing my name. Saman­tha Ruth Thompson had been a sad, quiet girl who got picked on at school and struggled to get out of bed in the morning. My dad had always called me Rue, for my middle name, and when I went to college, I started introducing myself that way. I honestly often forgot what my legal first name was—I only needed it if I had to pay a bill over the phone or some such.

I chucked the other two boxes of old letters and the card on top, thoroughly burying any memory of Landry.