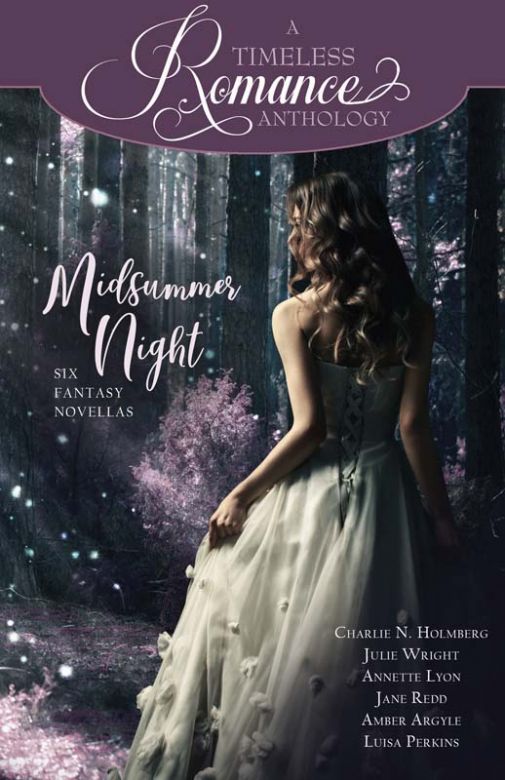 Six Fantasy Romance Novellas in one collection:Featuring Wall Street Journal bestselling author Charlie N. Holmberg, with Julie Wright, Annette Lyon, Jane Redd, Amber Argyle, and Luisa Perkins.ILLUSIONS OF LOVE by Charlie N. Holmberg:Aster has worked as the great magician Celtin's assistant for two years and has been in love with him nearly as long. After hearing he'll be looking for a wife at the house ball, Aster disguises herself as a high-class woman so she can woo him away from other bachelorettes. But not everything goes according to plan...DANCING WITH THE MOON by Julie Wright:A girl may love a ghost, but where would they live? When a ghost who insists he isn't dead shows up in Grace's shed, he begs for her help. If they cannot reunite his spirit and body before the full moon rises, Arell will die in actuality and so will the royal family. The race against the moon becomes more frantic when Grace realizes she loves him and will die alongside him if she loses him. But can a ghost with no heart return her love?THE TRUEST TREASURE by Annette Lyon:When Saara’s sister Fia is stricken with a fatal illness, she goes on a quest to find a magical treasure with which to pay a shaman who can save Fia. Midsummer Night is the best time to locate such a valuable item, as piru fire, which marks the location, appears then. Along the way, she meets Timo, who, unbeknownst to her, is on a similar quest: if he can’t find treasure to pay for an apprenticeship with a wizard, his magical abilities will never grow, and he’ll never reach his dream of becoming a wizard. They meet in the woods and become a team. but only one of them can come away with the treasure. As their feelings for each other intensify, deciding what to do when—and if—they seize the treasure becomes a much trickier proposition.THE ISLE OF ROSE by Jane Redd:Cornelia's greatest secret is that she can read minds. When her sister elopes with another man, Cornelia must stand in her sister's stead to marry Lord Moss, a man with the same gift, who has the power to expose her.FIRE AND FOUNTAIN by Luisa Perkins:Historian Lucie Tremblay loves studying Québec’s past, but when she accidentally travels back in time through a magical St. John’s Eve bonfire, she finds that life in 17th-century New France is far more complicated than it seems in books. As colonist Nicolas Beaubien tries to help her find a way back to 2019, Lucie finds herself falling for him—and must choose between her old life and new love.LADY OF SHADOWS by Amber Argyle:Every year, girls go missing in the night—taken by the beast of the Forbidden Forest. A beast that has haunted the town of Hamel for centuries. A beast that is now coming for Caelia.Midsummer Night is a Timeless Romance Anthology® bookMore TIMELESS ROMANCE ANTHOLOGIES:#1: Winter Collection#2: Spring Vacation Collection#3: Summer Wedding Collection#4: Autumn Collection#5: European Collection#6: Love Letter Collection#7: Old West Collection#8: Summer in New York CollectionTimeless Romance Anthology® is a registered trademark of Mirror Press, LLC