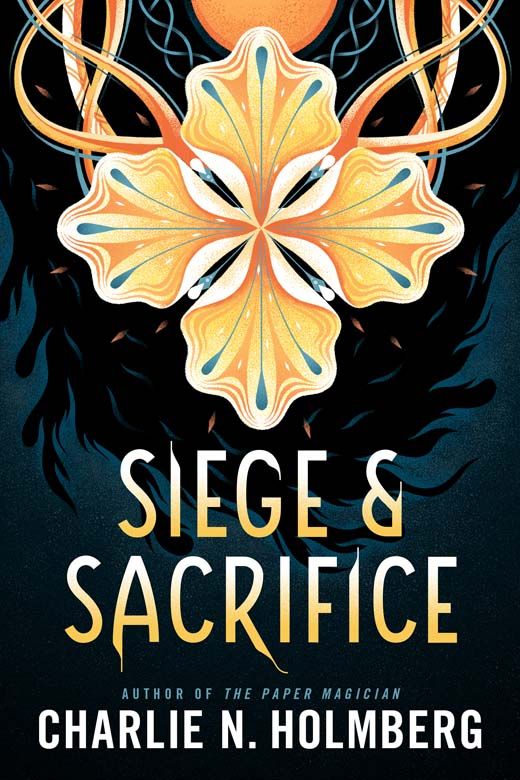 From the Wall Street Journal bestselling author of The Paper Magician Series comes the enthralling climax of a cataclysmic war between monstrous creatures.

Sandis has finally freed herself from her master and his plans to use her as a vessel for the ancient beast Kolosos. But her master has found a new, impossible vessel: Sandis's brother, Anon-a brother she long thought dead.

Kolosos is ancient, massive, and seemingly unbeatable. Fortunately, Sandis has her own monster-an ethereal fire horse that she can summon at will. In addition, she and Rone may have discovered the secret to defeating Kolosos: ancient lore that details the creation of magic. It could be the key to victory and the key to saving Anon.

The price is steep, and Sandis is willing to pay it. Rone is not, and his attempt to save her only pulls them apart. As both are tested in ways they never expected, Sandis and Rone will need to determine the sacrifices they are willing to make. If their efforts are not enough, their city will fall…just as the ancient city beneath it already has. 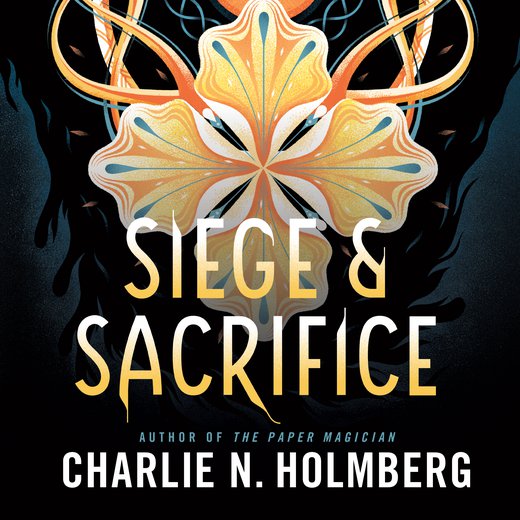 The eruption was like being submerged in a vat of boiling iron. Like blood and fire and power. It happened so fast. One moment Rone was running for his amarinth, and the next he was on his back, staring at a smoke-filled sky, breathing in sulfur and ash.

Except the smoke wasn’t from the city. It was black, thick, and curling, and it smelled like singed hair and rotten eggs. It spewed from a monster as tall as the Lily Tower. But where the tower stood tall and white, elegant in its structure, the monster hunched, its skin the mottled red and black of volcanic stone splitting from the pressure of the magma beneath. Its body was humanesque—legs, arms, torso—but its face was that of a bull. Great horns on its head pierced the sky even as black smoke poured from them. Red slits revealed large, narrow eyes, and rows of obsidian teeth jutted beyond split lips. Arms stretched heavenward, ending in hands spiked with bleeding talons. From its back jutted spiny wings, curved and hard like overgrown fingernails. They were the color of river silt and looked more like claws than anything meant for flight.

The red cracks in the monster’s armor brightened to near white, sending hot wind gushing over Rone. It dried him out instantly, sucking moisture from his mouth and nose.

Kolosos. This was Kolosos, the numen that had terrorized Sandis. The being that had struck fear into Rone’s father, the unfeeling Angelic.

And to think Rone had once found Ireth, the fire horse, terrifying.

He couldn’t move. His brain floated elsewhere. His body was lead. He lay there in shock, staring at the monster that had consumed his amarinth, even as its smoke burned his lungs. On its blackened shoulder, Kazen—was that Kazen?—laughed and ranted, but Rone couldn’t hear his words over the hissing of Kolosos’s joints. How could the madman perch there without being engulfed? All the while Kolosos watched them, feral, awaiting command.

It was Sandis’s scream that pulled him back to himself. She knelt a few paces behind him, her knees and palms bleeding, her eyes wide, her lips forming a word over and over. A word he couldn’t hear.

Rone’s limbs were awkward and heavy, but he found his feet and stumbled toward Sandis. Grabbing her shoulders, he hauled her up. Had she always been this light?

She shook her head, somehow managing tears despite the heat radiating from the monster. “Anon. Anon. He . . . Kolosos . . .”

Rone paused, staring at her, then shot a look at Kolosos, which stood still as its mad owner continued to yell, unaware that the few people who’d lingered couldn’t hear him. A priest ran, limping, past them, sweat drenching his white-and-silver robes as flames devoured the holy tower behind him.

Rone didn’t see anyone else. No dead brothers. No—

He stared at Kolosos’s hooves. The vessel . . . she couldn’t mean the vessel, could she? The adolescent who had clutched the amarinth before . . .

A grumble from Kolosos’s throat shook the earth beneath their feet. The numen lifted a smoking hand.

“Run now!” Rone grabbed Sandis’s wrist and yanked her toward the half-crumbled gate to the city. She complied, following his tug. Rone’s legs burned with fear-spiked energy. They had to get away. Faster, faster—

The sound of marble and wood breaking barreled into him as though it were a physical thing. Rone stumbled, his knee hitting the path hard. Sandis tripped over his leg.

He dared to look back.

The top two floors of the Lily Tower were shattered chunks around Kazen and his monster. Kolosos lifted a hoof and stepped on one of the smoking remnants. The stones hissed under the contact and exploded into ash.

Rone cursed hard enough to make any god wince. Sandis was already on her feet, pulling at him. He leapt up and ran, his fingers tight and clammy around hers. His vision tunneled as though shadows swirled around his path. There was only the wall. Only the entrance to the city. They had to run. Hide. Run.

The ground shook. Rone didn’t need to turn around to know the enormous numen had taken a step toward them. It shook again, harder this time, pulsing as though it contained a heart the size of Dresberg. The third time, the ground bucked enough to throw Rone off his feet. He pushed himself up and sprinted, still holding on to Sandis. The fourth step, the path cracked.

Sweat poured down Rone’s face as the heat increased. He could just make out Kazen’s voice, though his words were a jumbled mess. The bastard would finally have his revenge. The wall was so close, but not close enough.

Sandis was saying something to him. Rone’s legs pumped as he turned toward her, trying to understand.

“Can you carry me?” The question was a desperate plea, hoarse and loud. She was too tired to go on. They were already dead. But Rone nodded, regardless. He’d rather die holding her.

Sandis yanked her hand from his grip, causing him to trip over himself. He turned around only to see her throw her dress at his feet.

Then she erupted into pure flame, a bonfire of white and orange that barely reached Kolosos’s knees. A pale halo surrounded her and spun like the loop of an amarinth.

A ball of fire the size of a carriage shot upward, headed right for Kolosos’s face.

No. She had aimed for Kazen.

Kolosos reared back to protect its summoner, and the flames exploded against its mouth. The ground shook twice under two retreating steps.

He grabbed her and her dress, threw both over his shoulder, and bolted into the city.

Of course she only takes off her clothes when we’re about to die. The thought was hardly serious, but Rone’s mind was spinning in a million directions, and the pathetic humor helped him focus. His body was putty, his shoulders and feet numb, but he kept loping through the city, over broken bits of wall and road, around abandoned wagons and empty buildings. The city, usually packed to the brim with people, looked abandoned. The bell towers failed to ring, and even the smokestacks’ polluted whispers had hushed.

It was as good a place as any, and close.

The ground shook again, causing buildings to bow and tremble, cobblestones to knock together. This quake wasn’t quite as strong—perhaps Kolosos had turned around to finish wreaking havoc on the tower. How had Sandis known where Kazen would strike?

Rone’s toe caught on an unleveled cobblestone, but he managed to stay upright. He shifted Sandis’s unconscious form on his shoulder and kept running, passing two men cowering behind a street cart.

The dilapidated buildings that surrounded Kazen’s old lair were probably the last place Rone would want to be during an earthquake; already he saw one that looked to have crumbled from the impact of Kolosos’s footsteps. But he trudged forward, lungs and calves burning. Sweat stung his eyes. Air stung his nostrils. His dry tongue was a wadded sock in his mouth.

He got inside the hidden door, half slid down the stairs, and collapsed at the start of the white corridor that led to Sandis’s old prison. Rone’s back hit the wall, and Sandis fell into his lap. Hugging her, he closed his eyes and desperately gasped for air. His entire body tingled as his muscles unwound. His joints ached like deep bruises.

“What’s going on?” Cleric Liddell, the Angelic’s messenger priest, bellowed down the corridor. “What—by the Celestial!”

Rone opened his dry eyes and turned his stiff neck so he could look at the cleric, whose white robes looked too pristine. The cleric stared at Sandis.

The priest dumbly nodded his head and retreated.

Rone didn’t move. He couldn’t. He managed to unclaw his hand from Sandis’s dress, but he didn’t have the energy to lift it over her head. He could fall asleep right now, his foot crushed beneath his backside, his body stiff with drying sweat, his insides sore and strung out. When Liddell came back with the water, the priest had to hold it to Rone’s lips to get him to swallow. Half of it poured down the side of his neck. It felt too cold, like Rone had a fever.

The lair trembled softly, like it purred. Liddell inched toward the exit, muttering something about “another one.” Only then did Rone piece together that the priest might have been staring at the brands on Sandis’s back more than her nudity.

“Be careful if you go out there,” Rone rasped. The cleric paused for a moment before giving a grim nod and continuing up the stairs to witness the carnage for himself.

Despite his fatigue, Rone tightened his arms around Sandis. The lair rumbled again, but Rone closed his eyes, exhaustion weaving through his blood.

When he opened them again, Cleric Liddell hovered in front of him with a lamp. “The beast is gone,” he said, his voice too high, too weak. “But so is the tower.”