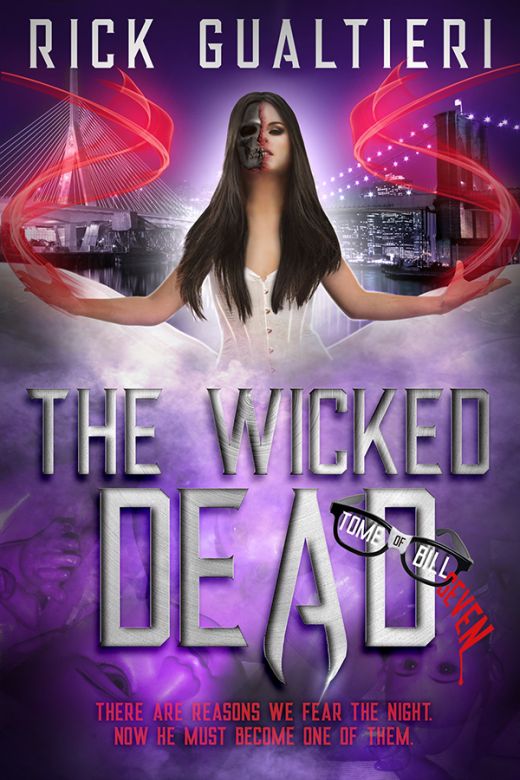 There Are Reasons We Fear The Night. Now He Must Become One Of Them.Bill Ryder has a powerful destiny. He just never expected it to involve an amnesiac bloodsucker, a bunch of D&D dorks, and a hormonal witch. It's time for the gamer, geek, and legendary vampire to embrace his fate. Ordered to storm the vampire stronghold in Boston, Bill must approach the doorstep of the invincible undead warlord he's destined to face. It's his only chance of stopping Armageddon.

As his enemies stand in his way and his allies falter, the vicious beast inside of him wants out. If he stands tall and faces his fate, the world might just have a chance of surviving. If he fails, an unquenchable evil will destroy everything Bill knows and loves.

Why can't the end of the world ever be easy?

The Wicked Dead is the seventh book in the bestselling Tome of Bill saga, a vampire comedy series with a nasty overbite. If you like bloody fight scenes, geeky in-jokes, and breakneck-paced action, then you'll love Rick Gualtieri's latest installment in the perfect vampire series for the 21st century adult.

Buy The Wicked Dead to watch this nerdy vamp fight for his life today!

How the hell did I end up here?

Not in this actual place, mind you. That one is pretty damn easy. I mean, I live here – not actually in the bathroom, of course. I’m talking here in a metaphysical sense anyway.

See, not too long ago, I died and was resurrected as one of the fiendish ... err ... fiends of the night – the nosferatu, which I’m pretty sure is a movie name and not a scientific classification. In laymen’s terms, I got bitten and woke up as a vampire.

That was fucking weird enough, but it was only the tip of the iceberg. Things snowballed from there, all the way to a problem that sorta concerns the end of the world. Pretty heady stuff for a guy whose typical weekend used to involve little more than getting shitfaced.

Sadly, there’s a supernatural war raging, one fated to lead to an end state not entirely dissimilar to the Biblical Armageddon.

It gets even better. Through actions not entirely my fault, I am afforded the privilege of receiving credit for starting this war. Go me!

But that’s not all. According to a bunch of dusty old scrolls – ones that I’m not even allowed to read – I’m supposed to be a major player in its outcome.

All in all, it’s a nightmare I can’t seem to wake up from.

Wait a second. Was I actually about to go off into a whining bitch-fest about never asking for any of this? Ugh. That’s it; I’ve become a fucking movie cliché. I might as well change my last name to Potter and resign myself to the fact that, no matter what I do, the dumbasses in charge will be too fucking stupid to stop anything without my stepping in and winning the Tri-wizard Tournament or some shit like that.

Any of a dozen movie plotlines run through my head, and they’re all more or less the same: reluctant hero must believe in himself because destiny cannot be denied ... blah blah blah. Goddamn, are there no original stories left to tell? Oh well, at least most of them aren’t musicals. According to my sixth-grade band teacher, if I was forced to play for my supper, I’d die a slow death by starvation.

Any way you look at it, I’ve been shoehorned into a role I don’t want – especially right now. If anything, I have plenty of other shit to keep my mind occupied, some pretty good stuff at that.

Hell, two blonde goddesses live just one floor below me – either one of which I would be more than happy to call my girlfriend, lover, or chick who occasionally fucks my brains out but otherwise treats me like shit. One of them is a plucky, mind-scrambled vampire who, if attitude were ice cubes, could sink the fucking Titanic. The other is my former co-worker turned ancient enemy that I am destined to one day battle to the death. Shit, entire romance series have been written about crap like that.

Yet, with all that potential, I’m distracted from what should come naturally. I mean, I’m locked in a bathroom. Under normal circumstances, I’d be more than happy to indulge my imagination so as to take care of business – if you catch my drift.

Instead, I’m standing here looking at myself in the mirror – glancing fleetingly into my own eyes, knowing there might be something else inside of me staring back ... hell, almost daring it to.

I’m still not sure I want to kick that particular nest too hard. It’s one thing to be stung by a honeybee. Sure it hurts, but unless you’re allergic, it’s not the end of the world.

What lurks inside the deep reaches of my mind, though, is more the equivalent of those giant nightmare hornets they have in Japan. Hell, I wouldn’t doubt those things are less insect and more a faction in this war. If I ever found myself standing between an angry Sasquatch and a swarm of those fuckers, I’d...

I shake my head to clear it. Distractions aren’t particularly helpful when it comes to getting anything done, and I’ve always been more susceptible to them than most. Almost makes me wonder if my parents should’ve put my ass on Ritalin back when I was in grade school. Hell, it’s not like I’ve never subscribed to the better living through chemistry trope. Why, I remember this one time Tom and I got so stoned, we...

I’m doing it again, aren’t I? Seems to be the story of my life. Anyway, my point had nothing to do with any of that crap.

The truth for me is that it’s all about fear. It always has been.

There have been so many things I’ve wanted in my life – some of those being more people than things – yet I’ve never wanted them badly enough to actually do anything substantial about it. It’s always some excuse: I’m too busy, too shy, too dead ... too afraid.

That last one’s the real kicker. I might as well throw all the other excuses out the window. No matter how many ass-kickings I got in school, bosses who have bitched me out at work, or horrors I’ve faced down since becoming one of the undead, there’s always been one underlying factor. I’ve always been too afraid to do anything that could really move the needle.

A part of me wants to argue that’s bullshit. Hell, in the past year alone, I’ve faced down nightmares that would make normal people shit themselves copiously. We’re talking master vampires, assassins, rock monsters, Bigfoot, and even Gan. You’d think that would make me pretty darn brave, but I know better. That stuff was little more than a willingness to do whatever was necessary to keep breathing, all so I could eventually return here again and resume a life comfortably stuck in neutral.

I mean, have I taken the time to study vampire history and learn what I can? Aside from the prodding of others, have I taken it upon myself to train so as to best use my supernatural abilities? Hell, despite working with her for three years, dragging her into this war, and now living less than twenty feet above her, did I ever once sit Sheila down and do what should be the easiest thing in the world for a yappy fucker like me – talk?

Deep down, I know the answer to all of that.

I also know it won’t get the job done this time.

Again, I stare at my reflection in the mirror, but this time I don’t look away. My brain is too busy working overtime to process this little intervention I’m giving myself in my own bathroom – a bathroom that, quite frankly, could use a good bleaching.

Many of the movie plots running through my head share exactly what I’m thinking – heroes who were afraid to face their destinies, yet somehow got sucked into them anyway.

The more they fought against their fate, the stronger fate pulled them in. It’s not much different with me, except that most fiction is a pleasant lie meant to make us feel good. In real life, reluctant heroes probably find little more than an early grave waiting for them at the end of their story.

And that’s when a revelation hits me.

It’s so simple, I’m tempted to slap the shit out of myself for not thinking of it sooner.

I look at myself and say, “Reverse psychology, you stupid motherfucker.”

If I keep fighting against what needs to be done, I’ll eventually find myself in a final showdown – one I very much doubt I’ll win. I mean, destiny seems to love its fucking irony.

It sounds crazy and, quite frankly, somewhat stupid, but – according to my eleventh-grade economics teacher – the stupidest idea in the world realized will be infinitely more successful than the best idea that gets shelved because someone would prefer to sit on their ass instead.

Even if it doesn’t work, it should sure as shit prepare me a whole lot better than just standing here in my bathroom talking to...

A loud knock on the door causes me to almost jump out of my skin.

“You okay in there, Bill?” Tom, one of my human roommates, asks, a note of concern in his voice.

“Yeah,” I reply, forcing myself out of my reverie.

“Good, because some of us need to take a shit, and your desk is starting to look mighty inviting.”

Taking the time to wash my hands, I make him wait a few extra seconds as an unspoken “fuck you” of an answer.

I glance in the mirror one last time, my mind made up. There’s a lot of work to be done – and some of it goes so far beyond borderline insane that it’s gotten a green card and set up residence there.

Nevertheless, it’s time I got to it.