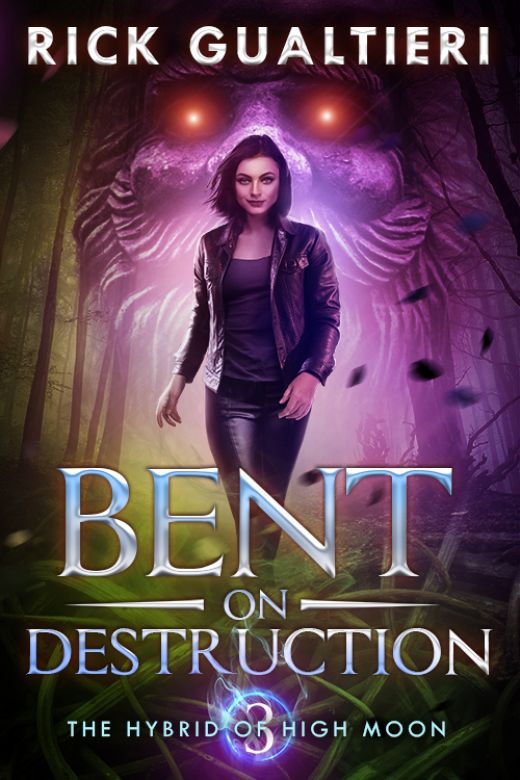 Being Half Witch and Half Werewolf Might Not Be Enough...
Lately, everything Tamara Bentley touches seems to turn to crap. Her best friend is missing, she was forced to kill her favorite aunt ... and her parents have been kidnapped by the queen of the fairies. It's enough to give a person a complex.


Too bad there's no time to drown her sorrows. She's got two warring factions to contend with. Neither the witches nor the werewolves like her, much less respect her, but somehow she needs to rally them to her cause if she's to have any chance of rescuing her parents.

That might be the least of her worries, though. A dark force has been unleashed and it's dead set on introducing her to a whole new world of hurt. Tamara will have to dig deeper than ever before to stop its plan, save her parents, and face off against a freaking goddess. No pressure there, right?

Bent on Destruction is book three of the Hybrid of High Moon series, a multi-dimensional can of whoop-ass urban fantasy with a side of humor.

If you're a fan of the tough as nails heroines from K.F. Breene, Annette Marie, Shannon Mayer, or Shayne Silvers, then you're going to love Tamara "Bent" Bentley. 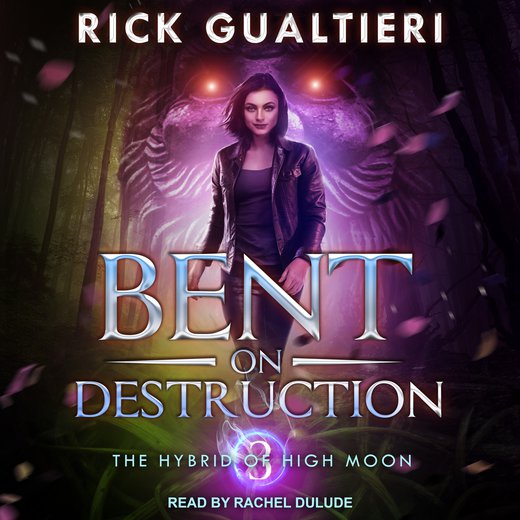 Flames rose from the bowl as the barest spark was added to the mixture within – orange at first but then quickly turning blue, telling the young witch she’d succeeded in this part of the incantation.

It was her first time officiating in front of an audience – her mother and the coven elders, the most unforgiving of judges. Both the pressure and scrutiny upon her were immense, so much that even her sister had skipped her usual teasing and simply wished her good luck.

However, Lissa McGillis, future Queen of the Monarchs, was far more curious than nervous as the magics of the invocation worked their mysteries. She knew the ceremony by heart, had practiced for countless hours on inert components until she could practically measure the ingredients in her sleep. If anything, she’d been tempted to steal away to the woods and perform it for real on no less than a dozen occasions. She was certainly bold enough to try but, in the end, not so reckless as to risk it.

Without a consecrated circle of sufficient strength, the spell was more likely to fizzle than succeed. Sadly, those near her home in Crescentwood Pennsylvania were warded against intrusion.

Recently, though, rumors had reached Lissa’s ears of a nearby sacred glade, one where the walls between realities were especially thin, even thinner than in the circle where she now performed the ritual. In such a place, a skilled practitioner could potentially make their pleas heard to those who lay outside.

Pity, that was easier said than done.

As luck would have it, this thin spot supposedly lay deep within the lands claimed by their enemies. Even at the tender age of sixteen, Lissa didn’t fear the lycanthropes. She’d been raised to trust in her own power, her own strength. Nevertheless, she was wary of crossing paths with the guardian who lay between Crescentwood and her goal. Old things such as it were to be treated with...

“One drop only,” Lissa’s mother whispered from behind her, rankling her nerves. “No more.”

Lissa was tempted to turn and tell her that she knew what she was doing. However, that would not only get her scolded but could likely ruin the incantation ... or worse.

Instead, she focused on the ethereal flames. Plucking up the ceremonial athame from the spot before her, she held her free hand over the fire, although it wasn’t really a normal fire anymore. Lissa knew her physics. Blue flames burned the hottest – over two-thousand degrees Fahrenheit – more than enough to char her hand to a crisp at this distance. Yet, if anything, the air around her had cooled considerably.

The ritual had opened a tiny sliver between her reality and what lay beyond – a space where mortal eyes were not meant to dwell. Beyond it lay infinite danger ... but perhaps also opportunity.

Invoking the ancient tongue, Lissa beseeched Queen Brigid and her most holy court to accept her offering then pricked her finger, letting a single drop of blood fall into the fire before pulling her hand away.

“I saw you hesitate with the blade.”

The ceremony complete, the formal part of the evening was over. Half the gathering had dispersed to fire up the grills, while the rest were gathered around the coolers stacked just outside the outermost ring of the circle.

Lissa had retreated down below to change out of her robes and into attire more suited for a backyard barbecue, not realizing her mother had followed.

“Spare me the patronizing bullshit, Lissa,” Vanessa McGillis, current Queen of the Monarchs and leader of the Crescentwood coven, replied. “Your father was a world-class shoveler, so I can smell it a mile away.”

Though her words were harsh, her tone wasn’t. Lissa could tell her mother was pleased with her performance, a rare good mood from an otherwise unforgiving teacher. However, she was also smart enough to hold her tongue and let the elder witch take the lead. She turned and raised an eyebrow, feigning ignorance.

“You’re my daughter,” Vanessa continued, stepping around her. “The McGillis women have always been bold, a proud line of coven matriarchs dating back over two centuries. You’re no different. Why, I remember you melting your tricycle into slag while the other new acolytes were still trying to conjure their first sparks.” She smiled as if the memory was a pleasant one. “Tell me the truth. You were tempted to up the offering, weren’t you?”

Lissa realized there was no point in denying it. Her mother would likely hound her for the truth otherwise, keeping her from joining the evening’s revelry. Besides, Gavin was waiting for her topside, hopefully with a few cans of purloined beer. With any luck, they could sneak away to...

Realizing a blush was beginning to spread across her face, she quickly said, “Maybe an extra drop or two, no more.”

Vanessa nodded. “I thought so. I won’t lie and say I haven’t been tempted as well. A single drop seals the covenant of our fealty. It’s a small offering, all that’s asked of us, so that our strength might nourish the eternal garden of our ancestors. But more... That might attract the attention of something else, something greater. I can’t pretend that communing with a member of our dear queen’s court, even the lowliest of her circle, isn’t something I’ve dreamt of.”

“You know as well as I do,” Vanessa interrupted. “Those who dwell beyond the veil of our world are also outside its rules. Something as simple as a conversation to us could very well become an undying oath of enmity to them ... or a binding contract. You know how disastrous such things can be.”

Lissa nodded. She was a student of both Draíodóir lore and their history, which was rife with tales of communings gone wrong. “But that was all in the past.”

“Yes,” her mother replied. “And true, the past was different, more dangerous for us. There was a time when we didn’t have High Moon and its guardian to stand between us and the lycanthropes. They would raid our lands and steal our children. Even with all of our power, it was barely enough to hold them at bay, but we persevered.” She began to circle the room.

Lissa recognized what she was doing, becoming lost in the lesson. Once started, she could do nothing but wait until her mother made whatever point she was trying to get across.

“But not everyone agreed with our methods. Some reached out to beyond our world, to the outside. True, many had nothing but good intentions, but some had motives that were less pure. It didn’t matter, though. They were putting themselves at risk either way. Only the most skilled could complete the covenant and walk away unscathed. And yes, our legends speak of these heroes and their exploits. But history is fickle. It celebrates only those who were truly exceptional. Those who were not ... well, all we have to go by are rumors and whispers. People vanishing in the night, driven insane, or worse.”

Vanessa shrugged. “Or so our history hints. Warlocks having their bodies twisted and deformed, witches giving birth to monstrosities, and then there are those who simply vanished into the void – their bodies and souls lost to the infinite blackness.”

“The so-called space between worlds?” Her mother nodded, a haunted look upon her face. “A place both infinite and empty. A soul trapped there would be lost for all eternity with no hope of ever basking in the light of our holy queen’s court. Not even all the prayers in the world could reach one unlucky enough to be cursed in such a way. It would truly be a fate worse than death.”

Vanessa continued on, speaking to her daughter of the dangers of pushing the boundaries of their magic, but it was all stuff Lissa had heard before. It wasn’t long before she tuned out her mother’s words, focusing instead on those who’d been bold enough to try and skillful enough to succeed.

Her mother was right. Such Draíodóir were legends, remembered for eons afterward. Power, glory, fame, and respect were heaped upon their names. But it had been a long time since such heroes had walked the Earth.

It was something to think about, or possibly discuss with Gavin ... although, maybe that could wait until after their own personal festivities were finished for the evening.