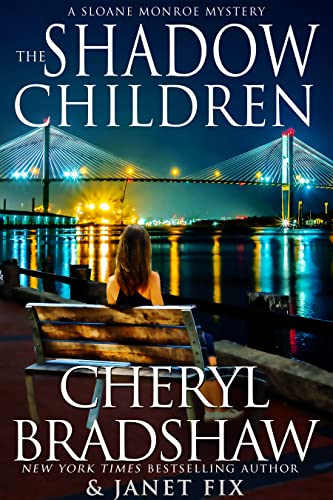 Save the children. This is her motivation, mantra, and endgame.

Within the tunnels of the historic port city of Savannah, fourteen-year-old Andi Leland has her mind set on freedom—not just for herself but for all the other teens who have come before her. But it is not to be …

As Andi’s dragged into the hellhole that would have them all sold to the highest bidder, she hears the strangled cries of a fellow captive echoing from the room below. When the silence comes, she knows she will never see that girl again.

And she wonders … Who will save them now?

Replete with intrigue, action, and plenty of surprises, this book will have you flipping the pages until the very end.

Grab your copy today and get swept up in a twisty tale of secrets and lies that will have you up reading all night.

Reader Reviews about this Series:

“Prepared to have your heart strings tugged just a bit.”

“The collaboration between these two authors is just brilliant!”

“Looking forward to reading more of Sloane and Maddie adventures!”

Books in this Series:

Andi Leland was determined to escape. She’d finally made it to one of the tunnel
entryways, figured out how to work the concealed door so she could slide it open, and
she peered out, taking in her first breath of freedom. But freedom was not to come, and
Andi was shocked to find the door opened straight into a famous restaurant where,
legend had it, pirates of yore shanghaied unsuspecting drunks into a lifetime of
servitude.
Inside the restaurant, a woman’s eyes locked on Andi’s. The woman waved a fried
chicken leg in Andi’s direction and screeched, “Look! There’s a girl down there!”
A slight hesitation on Andi’s part, and she was yanked back into the brick-lined
tunnel by her long, black hair. The heavy door slid shut, and Andi knew the poor woman
would be accused of inciting chaos, told her eyes were playing tricks on her, and on and
on it would go. Maybe she’d be interviewed by media about what she’d seen. But not
one single soul would investigate further. There would be no hint of a door. No way to
move it and find the tunnel section—just one in a labyrinth that ran beneath the floors of
the history-filled city of Savannah, Georgia.
To most people in the area, including law enforcement and city workers, the tunnels
had long ago been sealed off.
Forgettable.
Unusable.
Irrelevant.
A dark history better left in the past.
Except some people knew that wasn’t true, including a close-knit group of teens, of
which Andi was a part.
“You shouldn’t have done that, Andi.” The man’s fetid, warm breath was close to her
ear, and she shuddered. “Tsk. Tsk. I just don’t understand you. You’re one of my all-
time favorites, and it’s clear we were meant to be together. You came to me yourself.”
Came to him?
He was crazy.
Delusional.
He shook her by the hair. “Why run away from me? Tell me!”
“I-I don’t know. I’m sorry.” It wasn’t enough. She knew she had to come up with
something better. “I was just, uh, curious. I wasn’t going anywhere.”
He spun her around and shoved her forward, and they shuffled along the tunnel
path by the beam of a small flashlight her captor waved back and forth, up and down.
“One, two, three, four, five. One, two, three, four, five.” The big man chanted all the
way, as if counting their steps, or counting the seconds … or whatever. He was always
counting.
Freaking psycho.
When they reached the basement to the house, he flung the door open, shoving her
yet again. “Up the stairs. Get back up there with the rest of them.”

Andi did as she was told, dreading the idea of facing the others with her failure. She
pulled herself up through the attic floor, and her dread became reality. Three sets of
eyes peered at her with disappointment—and fear. Always the fear.
The fourth set of eyes were closed, sleeping blissfully next to his young mother.
Andi moved to her sad excuse for a bed, nothing more than a flimsy cot and pile of rags.
The man secured her wrists with cuffs, which were attached to heavy-duty rope that led
to the brackets in the wall. Then he left.
“I’m sorry,” Andi whispered to the others. “Don’t give up hope.”
Three heads bobbed.
Andi tried to reassure them further, saying, “I’ll find another way out of here. I
promise.”
They didn’t seem convinced.
Andi had done her best to keep track of the number of days she’d been trapped
here. Since Friday night, and four days had passed. She cursed herself yet again,
remembering the moment she’d realized her cell phone was no longer on her person.
She’d dropped it somewhere along the way. It could have saved her, saved all of them.
Another failed move on her part. The others had been here for varying amounts of time,
all of them defeated, waiting for the nightmare to end. Or get worse.
The man popped his head back through the hole and pointed at the girl holding the
baby. “You! There’s someone who’d like to meet you.”
His leering grin foretold of another violation to come. Andi knew it well. As did the
other two girls in the room, and all the others who came before them.
The man approached the girl to release her from her cuffs, and she whimpered.
“Take me,” Andi pleaded. “Take me instead.”
He chuckled, so wicked. “Not this time. I don’t share you with just anyone. She’ll do
just fine. Besides, there are two more of you to come. A nice even five.”
An even five?
The man was bonkers.
Eyes brimming with tears, the poor, shivering girl glanced back at the baby and then
at Andi. “Take care of Bram for me, okay? Make sure he—”
The man lunged forward, slapping the girl across the face. “Enough! No more
talking.”
Defiant, Andi said to the girl, “Don’t worry. I will.”
And with that, the man lowered the hatch, and they were gone.
Over the next several minutes, the three teens sat in silence. And then a scream
ripped through the stale air. A scream filled with all the horrors a young girl could
imagine. A scream that called out for death, a welcome respite. And Andi knew she’d
never see the girl again.
She shuffled forward, her arms straining at the cuffs, until her feet reached the
blanket where the baby slept. Using her toes, she tugged at the fabric, pulling it closer .
. . inch by inch. When the boy was within reach, she nestled him in her arms, choking
back tears as she thought about their plight. Her rescue attempt had failed—and now, a
horrible, violent future was in store for them all.