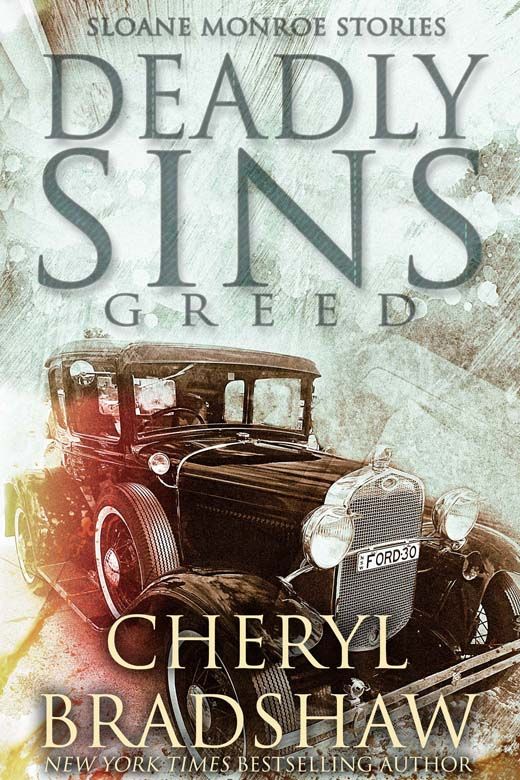 It was just another day for mob boss Giovanni Luciana until he took his car for a drive.

On a calm summer evening, Giovanni takes his young son Luca for drive. A car pulls alongside, and when the window comes down, the driver is holding a gun. He aims, showering Daniela's car with gunfire. Who is this man? Why has he taken Giovanni? And will Luca survive? 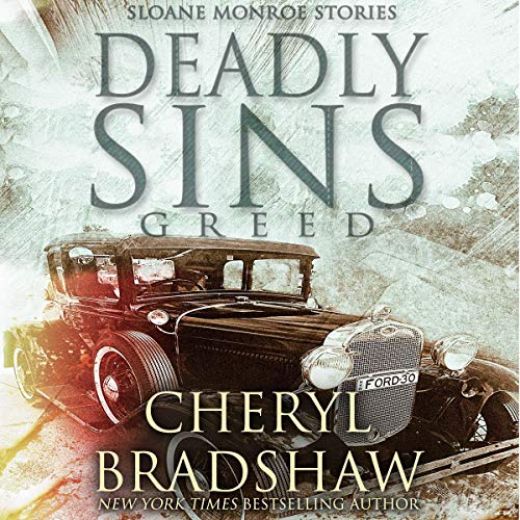 Giovanni Luciana pulled the black 1930 Ford Model A Coupe into the garage, gliding it to a gentle stop behind another of his other collectible cars, a 1969 Ferrari 365GTS. His auto collection was pricy and rare, and though the Model A had been purchased for a modest amount in comparison to most of the other vehicles, it was the only one with sentimental meaning, which set it apart from the rest.

He exited the car, taking time to slide the door ever so gently to a close. Running a hand along the smooth, refinished exterior, he paused, taking a moment to appreciate what it meant to have the car back in his family’s possession.

The history of the Model A was a scandalous one, having first been commandeered away from its owner, Robert Johnson, by Giovanni’s great uncle, John Dillinger, in 1934. Dillinger and his top two lieutenants, Hommer Van Meter and John “Red” Hamilton fled from federal agents after President Roosevelt and J. Edgar Hoover ordered the capture of the infamous “Dillinger Gang.” Dead or alive. Sliding into the rich, brown interior seat, the notorious Dillinger, sensationalized for robbing twenty-four banks and four police stations, had wasted no time shattering the glass, jutting his tommy-gun out the rectangular back window, and opening fire on the onslaught of Feds following close behind. Pelted with bullets, the Model A had soldiered on, and just as he had so many times before in the past. Dillinger managed to elude police. Only this time, his victory would be short lived. A few months later as Dillinger left the Biograph Theater, over twenty agents had positioned themselves outside. Dillinger’s luck had run out. There were no avenues for escape. Shot four times, the fatal bullet entered the back of his neck, exiting beneath his right eye and killing him instantly.

At the tender age of thirty-one, Dillinger was a dead man.

He was also a mafia legend.

The Ford was eventually returned to its original owner. Upon assessing the barrage of bullet holes and blood-soaked interior, he’d decided it was of little value and shoved it away inside a garage. It was eventually sold and restored decades later by movie producers who used it on the set of Public Enemies. It was then put up for auction, where it found its way back into Giovanni’s possession.

Giovanni reminisced about the day it had been delivered, patting the roof with the palm of his hand like it had won the grand prize at Churchill Downs.

The sound of a door creaking open snapped him back into reality, and he turned. A young boy poked his head out, eyes wide.

In truth, Giovanni wasn’t the boy’s biological father. The boy had been the product of a one-night stand that Giovanni’s late wife Valentina had while they were married. No one knew, of course. No one except Sloane Monroe, the only woman Giovanni had ever truly loved.

Giovanni smiled. “We’ll go for a ride, but not today, Marcelo.”

The boy sighed, staring at the ground, defeated. “Please?”

“Where’s your Aunt Daniela? She should be tucking you into bed right about now, shouldn’t she?”

“She’s asleep on the couch, but she lets me stay up late when it’s not a school night.”

Giovanni raised a brow. “Not too late, I hope.”

“She said since I’m six years old now I get an extra half hour on the weekend. And you promised you’d take me this weekend. So can we? Please?”

Giovanni glanced at his watch, then motioned for Marcelo to join him. “One hour, and then you’re off to bed. Understand?”

Marcelo nodded. “Can Luca come too?”

A year younger than Marcelo, Luca had a mass of long, wavy brown curls and large, charming eyes to match. He poked his head around the corner, produced a sheepish grin, and said, “Ciao, Uncle Giovanni.”

“Ciao, Luca.” Giovanni glared at Marcelo. “Why didn’t you tell me your cousin was with you tonight?”

Marcelo stared at the ground and shrugged. “Sorry, Papa.”

With two boys now in tow, Giovanni considered reneging on the deal he’d just made, but one look at Marcelo’s tenderhearted face, and he couldn’t help but crack a smile. “All right, fine. Which car would you like to go for a ride in?”

Marcelo looked around and then pointed at the Model A. “I want this one.”

Giovanni was surprised. “We can take any car you like. Why this one?”

“Because it’s your favorite.”

“It’s only a two-seater. We should take something else.”

Marcelo crossed his arms in front of him and closed his eyes. “It’s not far.”

Giovanni placed his hands on the boy’s shoulders. “I suppose you’re right. Just this once though. Got it?”

Marcelo nodded and the boys hopped inside. Giovanni restarted the car. “Gelato?”

Giovanni eased the car onto the street, heading to Gelateria Cremeria, a gelato shop a few miles away. He’d driven down the road and made a turn before noticing a sedan trailing close behind. As dusk spread across the night sky like the slip of a glove over a naked hand, the sedan’s headlights beamed through the Ford’s back window. The driver was following close—too close for Giovanni’s liking—especially considering he had two young boys in the car.

Unwilling to increase his speed to accommodate the other driver, Giovanni rolled his window down and stuck a hand out, waving the vehicle on by. The gesture failed to produce the results he wanted, and the sedan remained close, hovering as if to prove a point. Keeping one hand steady on the steering wheel, Giovanni slid the other inside his suit pocket, wrapping his fingers around his gun. He assumed the other vehicle’s passengers were more of a nuisance than a threat, but in his line of work, one could never be too cautious.

Marcelo came to his knees, turning around in his seat. He pointed through the slim, rectangular back window. “Why are their lights so bright, Papa?”

“Never mind that, Marcelo. Turn around. Sit back in your seat.”

What he couldn’t ask was for Marcelo to strap on a seatbelt, as seatbelts didn’t exist in cars from that decade.

Veering away from the route he usually took, Giovanni swerved, turning onto a quiet side street a few blocks away where there were a series of vacant lots for sale. The sedan would have no other reason to take the same turn. And yet it did.

Giovanni removed his hand off his gun for a moment and reached for his cell phone, pressing a single digit. The call was answered on the first ring.

“Falcon, I’m on Danbury Lane,” Giovanni said. “Marcelo and Luca are with me. We have company. I don’t know who they are or what they want. I need you and Salvadore to—”

Before he could finish his sentence, a polished, black Mercedes Maybach pulled alongside, its window tint so dark it offered no visibility to the interior of the vehicle. The driver’s-side window came down, revealing a single man in the vehicle. He didn’t seem familiar. The man aimed a gun at Giovanni, his lips curling into a nefarious grin. It was a look Giovanni recognized, a look he himself had made before. A look that said: Checkmate.

Gripping his own gun, his thoughts turned to the boys.

“Luca and Marcelo, get on the floor,” he ordered. “Cover your eyes and stay down until I tell you to get up. Understand?”

Giovanni cranked on the wheel, rounded the cul-de-sac at the end of the street, and then stepped on the gas, taking the car as fast as it would go. With the Ford’s maximum speed topping out at sixty-five miles per hour, it was no match for a car that went from zero to sixty in five seconds.

Questions surged through his mind.

Who was this man?

Why was he targeting him?

And more importantly, the driver had the opportunity of a clear shot. Why hadn’t he taken it?

Giovanni made it back to the top of the street before the Mercedes swerved, pulling alongside once again. This time Giovanni was ready. He steadied his gun, exchanging gunfire with the driver. The Mercedes skidded off the road, face-planting into a nearby tree, slamming the man’s head onto the steering wheel.

Giovanni thrust the car into gear, preparing to speed away. “Boys, are you all right?”

Marcelo made a grunting sound. Luca made no sound at all.

Giovanni placed a hand on Marcelo’s limp shoulder, then turned his palm upward in disbelief.

But it wasn’t Marcelo’s. It had dripped onto Marcelo’s shoulder from Luca’s neck.

Where the hell was Falcon and Salvadore?

What was taking so long?

Pounding his fist into the steering wheel, he switched the car off, spewing curse words into the open air. He was angry. Angry at the man in the Mercedes. Angry at himself. He jerked the car to a stop, staring back at the sedan wrapped around the tree. The man remained motionless. Yanking Marcelo’s limp body from the floor, he pressed two fingers against the boy’s tender flesh, feeling for a pulse. Weak, but it was there. He was alive—for now. Next he checked Luca, and felt nothing. No sign of life.

Giovanni glanced back at the other car once again. The driver was missing. Canvassing the neighborhood, Giovanni saw no sign of him. Getting even would have to wait. Now he needed to get the boys to a hospital.

Giovanni pulled the spark lever down, giving the Model A the gas it needed to chug to life. A shot rang through the air, piercing Giovanni’s shoulder. He raised his gun in retaliation, but it was too late. The man was beside him, the hardened steel from the butt of his gun pressing into Giovanni’s temple. The man was tall and thin, well-dressed in a fitted, Italian suit.

Giovanni remained. “I will not. I need to get the boys to a hospital.”

The man’s forehead wrinkled. Confused. He glanced over Giovanni’s shoulder, glaring at the boys in horror, as if surprised to find Giovanni wasn’t in the car alone. His voice cracked as he said, “I didn’t … are they … were they … hit?”

The man shouted an expletive into the air. “Step out of the car.”

“You. Plain and simple.”

“I’m not leaving the boys. You’ll have to kill me first.”

The man shrugged. “Fine by me.”