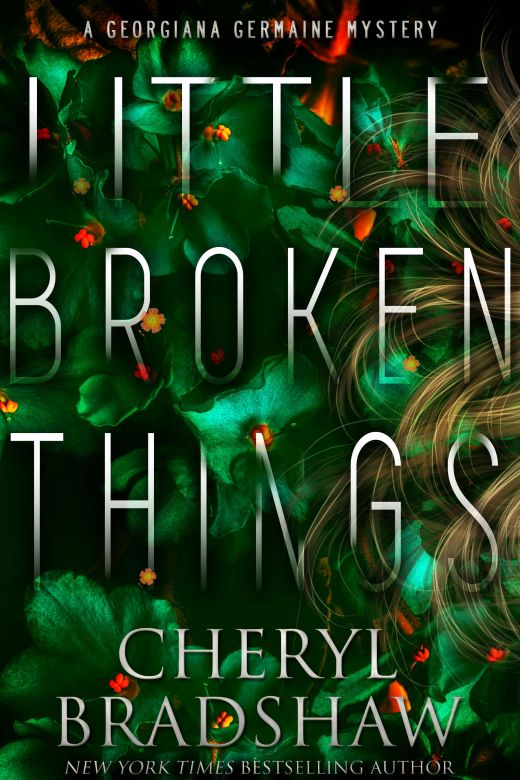 Detective Georgiana Germaine is back on the trail of a cold-blooded killer, and once again, the case hits close to home.Twenty-year-old Olivia Spencer sits at her desk in her mother’s bookshop, dreaming about her upcoming wedding. The shop may be closed, but Olivia's not alone, and her dream is about to become her worst nightmare.Little Broken Things is the third book in the USA Today bestselling Georgiana Germaine mystery series. Grab your copy today and get swept up in a twisty tale of secrets and lies that will have you reading all night.

Olivia Spencer reclined in her office chair, listening to the creaks and groans of the timeworn floorboards echo throughout the aisles of her mother’s antique bookshop. It was ten minutes past five, and she’d just switched the sign in the store’s window from open to closed. She slid off her heels, kicked her feet up on top of the desk, and blinked at the row of engagement photos pinned to the corkboard on the wall in front of her. Five prospects remained, all of them similar to the untrained eye, but not to Olivia. She could spot the subtle differences. In the first photo, one of her fiancé’s eyes was open more than the other. In the third, one of the sleeves on his button-up shirt was askew. In another still, he looked fatigued.

Olivia leaned forward and removed the fourth photo from the left. She smoothed a hand over its matte finish and smiled, reminiscing about the day she and Casper had first met. Preoccupied by a text message she’d received on her phone, she’d smacked right into him on the way out of the coffee shop. The plastic lid on her latte popped off and splashed all over his white T-shirt. Embarrassed, she’d grabbed a handful of napkins off a nearby table and made an unsuccessful attempt to blot the coffee stains off his shirt. He reached down, took her hands in his, and as she met his gaze, she felt something she never had before—love, real love.

A whirlwind romance ensued, one neither of them had expected. Three months into the relationship, they backpacked through Morocco. Two months later, he proposed, and much to the chagrin of her parents, she didn’t hesitate before saying yes.

“You have a scholarship to Berkeley,” her father had said. “You’re going to throw it all away to backpack the globe with a guy who has no set plans for his future?”

“You’re nineteen years old, Olivia—much too young to be getting married,” her mother had said. “There’s no need to rush it. Why don’t you wait a while? Take the time to get to know each other first.”

Her parents may have needed time. Olivia didn’t. Casper was her soul mate. No one had ever treated her the way he did. And though he didn’t know it yet, he’d saved her, rescuing her from a past she was desperate to strip away and leave behind.

The buzz from Olivia’s cell phone snapped her out of the memories and back to the present moment. She grabbed it off the desk and read the text message her fiancé had just sent.

Olivia: Sure. What time?

Casper: Seven o’clock? I’m thinking Chinese or Korean? I’ll swing by and pick you up and we can decide.

Casper: See you then. Love you. xx

Olivia placed the engagement photo she liked most inside of her wedding planner, gathered her things, and headed for the front door, stopping when she remembered one last task she hadn’t completed. She exhaled a heavy sigh, pivoted, and headed to the back room to retrieve a pile of Diane Capri’s newest thriller novels to display in the store’s front window. She grabbed the books off the shelf and was about to head toward the front of the store when she detected a flicker of movement along the wall on the opposite side of the room.

She poked her head around the shelf, blinked at the wall, and froze in place.

One minute passed … nothing.

Get a grip, Olivia.

I’m sure it’s just an insect of some kind.

Had it been a bug or an insect, though?

For her own sanity, she needed to be sure.

Olivia slid the books back onto the shelf and tiptoed to the other side of the room, relieved when she found nothing to validate her overactive imagination. The moment she turned back, a moth appeared out of nowhere and fluttered past. Olivia gasped, slapped a hand against her lips, and tried not to scream. She backed against the wall, bent down, and allowed the accelerated rhythm of her heart to return to normal before she went back for the books she’d abandoned. She had half a mind to leave the front display until morning, but then rejected the notion. She’d promised her mother it would be changed before day’s end, and even though it meant she wouldn’t have time to freshen up before her date, it didn’t matter. She always kept her promises.

The bells on the shop’s front door jingled.

Olivia moved a hand to her hip and sighed, irritated she hadn’t locked the door when she’d flipped the sign from open to closed.

She cupped a hand to the side of her mouth and shouted, “I’m sorry, we’re closed. We open again at nine o’clock tomorrow.”

There was no response, and when the bells didn’t ring out a second time to indicate the customer had left, Olivia stepped back into the bookshop and glanced around. She saw no one, and aside from the rhythmic hum of the air conditioning, all was silent.

“Hello?” Olivia said. “Is anyone there? Did you hear me? We’re closed.”

A quick look through the store convinced her the after-hours patron was no longer there. She grabbed the keys to the shop off the desk, locked the front door, and dimmed the lights to avoid any further distraction. A few aisles away, she heard a loud bang. It sounded like a book had fallen off a shelf. Olivia followed the sound to the collectible-books aisle and discovered a rare copy of Charlotte Bronte’s Jane Eyre had slipped off the shelf.

The aisle was empty.

But something told her she wasn’t alone.

Someone was there with her … close by.

She could hear the whir of his staggered breath.

Her voice cracked as she whispered a weak, “Hello? Who’s there?”

Olivia eyeballed the tote bag she’d left on top of a stack of bargain books near the shop’s entrance. It was twenty feet away, maybe less. Inside the bag was her cell phone. She had to get to it—now.

Olivia broke into a sprint. Fifteen feet … then ten … then five more to go.

A dark figure stepped in front of her. Based on the size and shape, she assumed it was a man, but was it? One of his hand’s was raised above his head, fisted around a long, slender pipe. His arm swooped down, and the pipe cracked against the side of her head. Thrust to her knees, a warm, sticky wetness dripped down the side of her face. She swiped her fingers through it and lowered her hand in front of her.

Olivia gripped the metal bookshelf beside her with both hands and pulled up, but her body wouldn’t cooperate and behaved like it had been pinned to the ground. A thick, leather boot hammered into Olivia’s chest—so painful, like the boot was made of stone. Olivia reeled back. Eyes blurred with tears, she got her first good look at her attacker. He was dressed all in black with the hood from his zipped-up sweater pulled over his head. Leather gloves adorned his hands, and a ski mask covered his face.

“Why are you doing this to me?” she screamed. “What do you want?”

The masked man tipped his head to the side and bent over her.

Tears showered down her face, and she prayed for a miracle she feared would never come.

“I don’t understand,” she said. “If it’s money you’re after, I’ll give you what’s in the register. If you want it, it’s yours.”

The masked man shook his head.

If it wasn’t money he was after, what did he want?

The masked man lifted the pipe once more and then hesitated as if questioning what he was about to do. Olivia thrust her hands to the floor and scuffled back.

He paused just long enough for Olivia to believe her words had meant something, and then the pipe smacked into her head again.

The man tossed the pipe to the ground, and as the life flowed from her body, he bent over her and lifted the mask just enough to prompt the final words she’d ever say in this life.