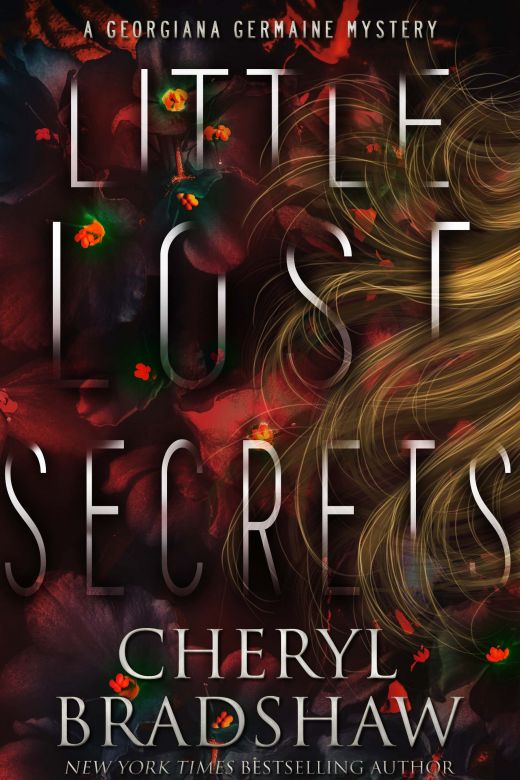 From New York Times Bestselling Author Cheryl Bradshaw comes book two in her exciting new mystery series.When a dead body is found in the walls during a home renovation, detective Georgiana Germaine gets swept into a cold case murder. Whose body lies within the walls of the house? And what ties does it have to the death of Georgiana's father more than three decades earlier?Love mysteries with a surprising twist? Little Lost Secrets will hook you from the first page.

It had been a long, arduous half hour for Tiffany Wheeler, and she feared it would get worse before it got better. Her boyfriend, Russell, stood a few feet away, his head cocked to the side, eyes wild. He brushed a lock of his black hair out of his eye, unbuttoned his suit jacket, and stared at her the way he always did right before his blood reached its boiling point and was about to bubble over.

“What do you mean you don’t want to live in LA anymore?” he asked. “Why not?”

“I’ve already told you why,” she said. “I’m tired of the fast-paced life. I want to move back home.”

“You said you were coming here to do a few simple renovations to this house before you listed it,” he said. “I get here and the place is a flipping disaster. You’ve torn down walls, gutted the kitchen. What gives?”

Tiffany remained quiet, considering the best way to proceed. It didn’t matter what she said. Russell was used to getting his way, something he wouldn’t get tonight.

He was in denial.

She was avoiding what had still been left unsaid.

Confrontation of any kind had always been difficult between them in the two years they’d been together. Russell was used to the high life, climbing the corporate ladder, and taking any steps necessary to rise to the top. In their relationship, it had always been his way or no way. And Tiffany now realized since they’d been together, she hadn’t just lost her identity; she’d lost her voice.

I think we should break up were the words she needed to say.

And yet, she struggled to bring herself to say them.

“I’ve decided to keep the house,” she said. “And I think we should … it’s just … I’ve done a lot of thinking since I’ve been here, and you’re a good guy. But I don’t think we’re right for each other. I waited until tonight to tell you how I was feeling because I hoped the doubts I’d been having about our relationship would go away. They haven’t, and I need to be honest … with you and with myself.”

Russell clenched his jaw and stepped back. “What you’re saying is, I’m a good guy, but not a great one. I’m good for you, just not good enough for you.”

In a moment of childish defiance, he scooped the flowers he’d just given her off the counter and tossed them at her face.

“You want to tell me what’s really going on here?” he barked. “You stepping out on me? Huh? You screwing somebody else?”

“Of course not!” she said. “Calm down. You’re being irrational.”

“You want irrational? I’ll give you irrational. I planned on surprising you tonight.” He reached a hand inside his pants pocket, pulled out a ring, and shoved it in front of her face. “I was going to surprise you with this.”

The subject of marriage had never even been discussed before.

“You were going to propose?” she asked.

He jerked his arm back and hurled the ring across the room, and she watched it disappear into a pile of drywall scraps.

“I was going to propose,” he said. “Not anymore. I thought we felt the same way about each other. Turns out, I’m the idiot. I love you, and you are interested in someone else.”

“What are you talking about? I told you the truth. There is no one else.”

“The least you could do is not lie to my face.”

He pushed her to the side and stormed into the living room, crouching over the area where he’d tossed the ring. She bent down beside him, reaching a hand into the pile to assist. He grabbed her wrist and snapped it back.

He flashed her an infuriated look and thrust a hand into her chest, hurtling her backward. Her head smacked against the wall behind her. Outraged by his physical assault, her first instinct was to shove him back, but when they locked eyes, all she saw in his was pain—a man whose life had just crumbled to dust without any forewarning.

“I love you, Tiffany,” he said. “I have no idea what I did to lose you, to deserve what you’re putting me through right …”

He stared at the wall, allowing his words to trail off before balling his hands into fists. Not knowing what would come next, Tiffany said, “No, Russell. Whatever you’re thinking of doing … don’t.”

She darted to the side. He drilled his fist into the wall inches from where her head had just been and then slumped to the ground beside her.

“I’m gutted,” he whispered. “You’ve torn me in half tonight.”

Tiffany exhaled a long breath of air and placed a hand on his shoulder. She let it rest there for a moment, and then she crawled over to the pile of drywall. She ran her fingers through the scraps, searching for the ring. She found it and turned, holding the ring out in front of her.

She dropped the ring into his hand, and he nodded. He pushed himself off the floor and walked toward the front of the house, stopping to glance back at her one last time before he left.

“I feel like I have no idea who you are,” he said. “The Tiffany I know shops at Gucci, stays in five-star hotels, and loves the energy and hustle of the city. This … what you’ve got going here … it isn’t you, and it will never work. Enjoy your crap life in your crap house.”

He walked out, allowing the door to slam behind him. She went to the window, pushed the curtain to the side, and watched him tear into the night. The breakup had been much more bitter and raw than she’d expected. But she was certain she made the right choice, even though she was sickened by what had just transpired between them.

She slid the curtain closed, grabbed a bottle of red wine out of a cardboard box, and guzzled half of it down. The recent weeks of pent-up frustration came flooding back in a wave of tears. She set the bottle down and walked into the living room, staring at the hole Russell had left in the wall. She reached down and picked up the construction worker’s sledgehammer, running its forged-steel head along her hand. She lugged the hammer behind her and swung at the wall, again and again and again, breaking the drywall, piece by infuriating piece. As her blows ripped the wall apart, her anger began to subside.

She dropped the hammer and fell to her knees, allowing weeks of repressed tears to flow. When her eyes opened again, she blinked into the hole she’d created, aghast to find she wasn’t the only one taking up residence in the house. There, in the wall’s hidden crevices, Tiffany made a gruesome discovery. Preserved in layers of dust-filled plastic were what appeared to be remains—human remains.