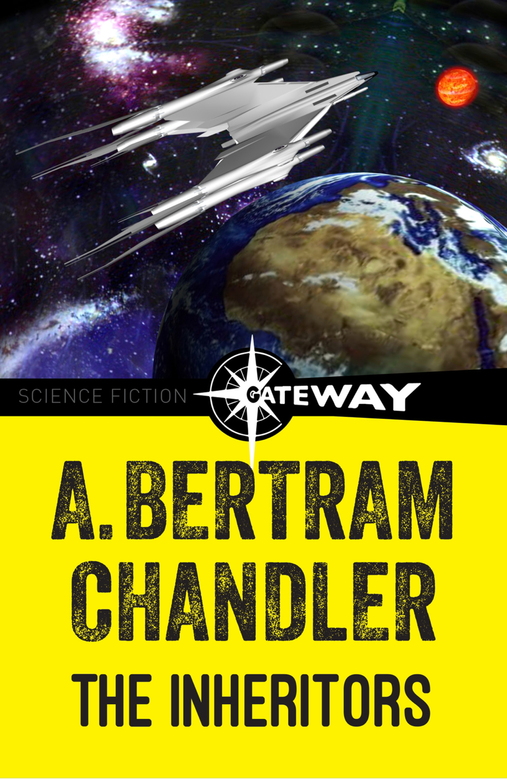 John Grimes tackles the slave trade on a lost world with some very feline like inhabitants.

GRIMES WAS ON the carpet—neither for the first nor the last time.

He stood stiffly in front of the vast, highly polished desk behind which sat Admiral Buring, of the Federation’s Survey Service. His prominent ears were angrily flushed but his rugged face was expressionless.

The admiral’s pudgy hands played with the bulky folder that was before him. His face, smooth and heavy, was as expressionless as Grimes’s. His voice was flat.

He said, “Commodore Damien warned me about you when you were transferred to my command. Not that any warning was necessary. For one so young you have achieved a considerable degree of notoriety.” He paused expectantly, but Grimes said nothing. Buring continued, but now with a hint of feeling in his voice. “My masters—who, incidentally, are also yours—are far from amused at your latest antics. You know—you should know—that interference, especially by junior officers, in the internal affairs of any world whatsoever, regardless of the cultural or technological level of the planet in question, is not tolerated. I concede that there were extenuating circumstances, and that the new rulers of Sparta speak quite highly of you….” The thick eyebrows, like furry, black caterpillars, arched incredulously. “Nonetheless …”

The silence was so thick as to be almost tangible. Grimes decided that it was incumbent upon himself to break it.

“Nonetheless, Lieutenant Commander, your continued presence at Base is something of an embarrassment, especially since a party of VIPs, political VIPs at that, is due here very shortly. Some commission or other, touring the galaxy at the taxpayer’s expense. I don’t want you around so that politicians can ask you silly questions—to which, I have no doubt, you would give even sillier answers.

“Furthermore, this whole Spartan affair has blown up into a minor crisis in interplanetary politics. Both the Duchy of Waldegren and the Empire of Waverley are talking loudly about spheres of influence.” The admiral allowed himself the suspicion of a smile. “In any sort of crisis, Grimes, there is one thing better than presence of mind….”

“And that is, sir?” asked Grimes at last.

“Absence of body. Ha. So I’m doing you a good turn, sending you out in Seeker, on a Lost Colony hunt. There have been persistent rumors of one out in the Argo Sector. Go and find it—or get lost yourself. I’m easy.”

“They’re your business, Captain. No, I’m not promoting you, merely according you the courtesy title due to the commanding officer of a ship. You look after those no doubt boring details. And”—he made a major operation of looking at his watch—“I want you off Lindisfarne by sixteen-hundred hours local time tomorrow.”

Grimes looked at his own watch. He had just seventeen hours, twelve minutes and forty-three seconds in which to ensure that his ship was, in all respects, ready for space. Maintenance, he knew, was well in hand. There were no crew deficiencies. Taking aboard essential stores would not occupy much time.

“You’d bloody well better. I’ll send your orders down to you later.”

Grimes put on his cap, saluted smartly and strode out of the admiral’s office.

SHE WAS A survey ship rather than a warship, was Seeker. The Survey Service, in its first beginnings, had been just that—a survey service. But aliens being what they are—and humans being what they are—police work, on large and small scales, had tended to become more important than mere exploration and charting. The Survey Service, however, had not quite forgotten its original function. It maintained a few ships designed for peaceful rather than warlike pursuits, and Seeker was a member of this small squadron. Nonetheless, even she packed quite a wallop.

Lieutenant Commander John Grimes was her captain. His last assignment, during which he had stumbled upon a most peculiar Lost Colony, had been census taking. Now he had been actually sent out to find a Lost Colony. He suspected that anything might happen, and probably would. It wasn’t that he was accident prone. He was just a catalyst.

Nothing had happened yet; after all, it was early in the voyage. He had lifted from Lindisfarne exactly on time, driving through the atmosphere smoothly and easily, maintaining his departure trajectory until he was clear of the Base Planet’s Van Allens. Then, with the inertial drive shut down, the ship had been turned about her short axis until she was lined up, with due allowance for drift, on the target star. The Mannschenn Drive had been started, the inertial drive restarted—and passage was commenced.

Satisfied, he had filled and lit his pipe, and when it was going well had ordered, “Deep space routine, Mr. Saul.” He had made his way to his quarters below and abaft the control room and then, ensconced in his easy chair, had opened the envelope containing his orders.

The first sheet of the bundle of papers had contained nothing startling. You will proceed to the vicinity of the star Gamma Argo and conduct a preliminary survey of the planets in orbit about same, devoting especial attention to any of such bodies capable of supporting human life. “Mphm …” he grunted. The rest of the page consisted of what he referred to as “the usual guff.”

At the head of the next page was the sentence that brought an expression of interest to his face. We have reason to believe that there is a humanoid—or possibly human—settlement on the fourth planet of this system. Should this settlement exist it is probable that it is a hitherto undiscovered Lost Colony. You are reminded that your duties are merely to conduct an investigation, and that you are not, repeat not, to interfere in the internal affairs of the colony.

“Mphm,” grunted Grimes again. Non-interference was all very well, but at times it was hard to maintain one’s status as a mildly interested spectator.

Appended hereto are reports from our agents at Port Llangowan, on Siluria, at Port Brrooun, on Drroomoorr, at Port Mackay, on Rob Roy, at Port Forinbras, on Elsinore, at …

“Mphm.” The Intelligence Branch seemed to be earning its keep, for a change. Grimes turned to the first report and read:

I have to report the possibility that there is a hitherto undiscovered Lost Colony in the Argo Sector, apparently on a planet in orbit about Gamma Argo.

It is my custom, whilst stationed on this world, to spend my evenings in the Red Dragon tavern, a hostelry that seems to be the favorite drinking place of whatever merchant spacemen are in port.

On the evening of May 3 several officers from the Dog Star Line’s Pomeranian were lined up at the bar, and were joined there by officers of the same company’s Corgi, newly berthed. As was to be expected, the personnel of the two vessels were old friends or acquaintances.

The table at which I was seated was too far from the bar for me to overhear the conversation, but I was able to make use of my Mark XVII recorder, playing the recording back later that night in the privacy of my lodgings. The spool has been sent to you under separate cover, but herewith is a suitably edited transcript of what was said, with everything of no importance—e.g. the usual friendly blasphemies, obscenities and petty company gossip—deleted.

First Mate of Pomeranian: And where the hell have you been hiding yourselves? You should have been in before us. I suppose that you got lost.

Second Mate of Corgi: I never get lost.

First Mate of Pomeranian: Like hell you don’t. I remember when you got your sums wrong when we were together in the old Dalmatian, and we finished up off Hamlet instead of Macbeth….

But what’s twenty light-years between friends?

Second Mate of Corgi: I told you all that the computer was on the blink, but nobody would listen to me. As for this trip, we had to deviate.

Second Mate of Corgi: Why?

First Mate of Corgi: You know what the old man told us.

Second Mate of Corgi: Too bloody right I do. He’s making his own report to the general manager, with copies every which way. Top Secret. For your eyes only. Destroy by fire before reading. He’s wasted in the Dog Star Line. He should have been in the so-called Intelligence Branch of the clottish Survey Service.

First Mate of Pomeranian: What did happen?

First Mate of Corgi: Nothing much. Mannschenn Drive slightly on the blink, so we had to find a suitable planet on which to park our arse while we recalibrated.

Second Mate of Corgi: And what a planet! You know how I like sleek women….

First Mate of Corgi: Watch it, you stupid bastard!

Second Mate of Corgi: Who’re you calling a bastard? You can sling your rank around aboard the bloody ship, but not here. If I’d had any sense I’d’a skinned out before the bitch lifted off. Morrowvia’ll do me when I retire from the Dog Star Line! Or resign …

First Mate of Corgi: Or get fired—as you will be, unless you pipe down!

Second Mate of Corgi: You can’t tell me …

First Mate of Corgi: I can, and I bloody well am telling you! Come on, finish your drink, and then back to the ship!

At this juncture there are sounds of a scuffle as Corgi’s chief officer, a very big man, hustles his junior out of the Red Dragon.

Third Mate of Pomeranian: What the hell was all that about?

First Mate of Pomeranian: Search me.

The rest of the recorded conversation consists of idle and futile speculation by Pomeranian’s officers as to the identity of the world landed upon by Corgi.

To date I have been unable to identify this planet myself. There is no Morrowvia listed in the catalogue, even when due allowance is made for variations in spelling. Also I have checked the Navy List, and found that the master of Corgi is not, and never has been, an officer in the FSS Reserve. None of his officers hold a Reserve commission. It may be assumed, therefore, that the master’s report on the discovery of what appears to be a Lost Colony will be made only to his owners.

Corgi, when she deviated, was bound from Darnstadt to Siluria. Her normal trajectory would have taken her within three light-years of Gamma Argo. The planetary system of Gamma Argo was surveyed in the early days of the Second Expansion, and no indigenous intelligent life was found on any of its worlds….

“Mphm …” Grimes refilled and relit his pipe. This was interesting reading.

He turned to the report from the agent at Port Brrooun. He, the shipping advisor to the Terran Consul, had been spending most of his free evenings in an establishment called the Beer Hive. Brrooun had been Corgi’s next port of call after Llangowan. Her second officer had confined his troubles to a sympathetic Shaara drone. At Port Mackay, on Rob Roy, he had gotten fighting drunk on the local whiskey and had beaten up the chief officer and publicly abused the master. Normally such conduct would have led to his instant dismissal—but Captain Danzellan, of Corgi, had been most reluctant to leave the objectionable young man behind, in the h. . .