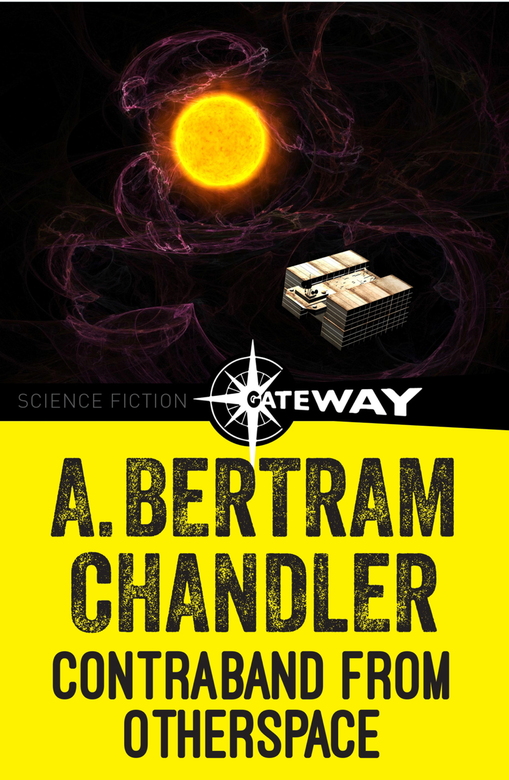 A deadly cargo that threatens to sheer through the fabric of reality, like a knife through soft butter.

TO A CASUAL OBSERVER his seamed, deeply tanned face would have appeared expressionless—but those who knew him well could have read a certain regret in the lines of his craggy features, in the almost imperceptible softening of the hard, slate-gray eyes.

The king had abdicated.

The Astronautical Superintendent of Rim Runners had resigned from the service of the Rim Worlds Confederacy—both as a senior executive of the government owned and operated shipping line and as Commodore of the Rim Worlds Naval Reserve. His resignations were not yet effective—but they would be, so soon as Captain Trantor, in Rim Kestrel, came dropping down through the overcast to be relieved of his minor command prior to assuming the greater one.

On a day such as this there was little for Grimes to see. Save for Faraway Quest, the Rim Worlds Government Survey Ship, and for Rim Malemute the spaceport was deserted. Soon enough it would resume its normal activity, with units of the Rim Runners’ fleet roaring in through the cloud blanket, from Faraway, Ultimo and Thule, from the planets of the Eastern Circuit, from the anti-matter systems to the Galactic West. (And among them would be Trantor’s ship, inbound from Mellise.) But now there were only the old Quest and the little, battered space-tug in port, silent and deserted, the survey ship a squat, gray tower (that looked as though it should have been lichen-coated) half obscured by the snow squall, the Malemute huddling at its base as though seeking shelter in the lee of the larger vessel.

Grimes sighed, only half aware that he had done so. But he was not (he told himself) a sentimental man. It was just that Faraway Quest had been his last spacegoing command, and would be his last command, ever, out on the Rim. In her he had discovered and charted the worlds of the Eastern Circuit, opened them up to trade. In her he had made the first contact with the people of the antimatter systems. In her, only short weeks ago, with a mixed crew of Rim Worlds Naval Reserve officers and Federation Survey Service personnel, he had tried to solve the mystery of those weird, and sometimes frightening phenomena known as Rim Ghosts. And whilst on this Wild Ghost Chase (as his second in command referred to it) he had found in Sonya Verrill the cure for his loneliness—as she had found, in him, the cure for hers. But his marriage to her (as do all marriages) had brought its own problems, its own responsibilities. Already he was beginning to wonder if he would like the new life the course of which Sonya had plotted so confidently.

He started as the little black box on his desk buzzed. He heard a sharp female voice announce, “Commander Verrill to see you, Commodore Grimes.”

Another voice, also female, pleasantly contralto but with an underlying snap of authority, corrected the first speaker. “Mrs. Grimes to see the Commodore, Miss Willoughby.”

She strode into the office, dramatic as always. Melting snow crystals sparkled like diamonds on her swirling, high-collared cloak of dull crimson Altairian crystal silk in the intricate coronet of her pale blonde hair. Her face was flushed, as much by excitement as by the warmth of the building after the bitter cold outside. She was a tall woman, and a splendid one, and many men on many worlds had called her beautiful.

She reached out, grabbed Grimes by his slightly protuberant ears, pulled his face to hers and kissed him soundly.

After she had released him, he asked mildly, “And what was that in aid of, my dear?”

She laughed happily. “John, I just had to come to tell you the news in person. It wouldn’t have been the same over the telephone. I’ve just received two Carlottigrams from Earth—one official, one personal. To begin with, my resignation’s effective, as and from today. Oh, I can still be called back in an emergency, but that shouldn’t worry us. And my gratuity has been approved …”

“How much?” he asked, not altogether seriously.

He whistled softly. “The Federation’s more generous than the Confederacy. But, of course, your taxpayers are richer than ours, and there are so many more of them …”

She ignored this. “And that’s not all, my dear. Admiral Salversen of the Bureau of Supply, is an old friend of mine. He sent a personal message along with the other. It seems that there’s a little one ship company for sale, just a feeder line running between Montalbon and Carribea. The gratuity barely covers the down payment—but with your gratuity, and our savings, and the profits we’re bound to make we shall be out of the red in no time at all. Just think of it, John! You as Owner-Master, and myself as your ever-loving Mate!”

Grimes thought of it as he turned to stare again out of the wide window, his mind’s eye piercing the dismal overcast to the nothingness beyond. Light, and warmth, and a sky ablaze with stars instead of this bleak desolation …

Light and warmth … And a milk run.

He said slowly, “We may find it hard to settle down. Even you. You’re not a Rimworlder, but your life, in the Federation’s Naval Intelligence, has been adventurous, and you’ve worked out on the Rim so much that you almost qualify for citizenship …”

“I qualified for citizenship when I married you. And I want to settle down, John. But not here.”

The black box on the desk crackled, then said in Miss Willoughby’s voice, “Port Control is calling, Commodore Grimes. Shall I put them through?”

“Isn’t that one of the things they’re paid for?” asked Grimes mildly.

“Yes, sir.” Cassidy’s voice was sulky. “But there’s nothing due for almost a week, and …”

“Probably one of the Federation Survey Service wagons,” Grimes told him, flashing a brief smile (which she answered with a glare) at Sonya. “They think they can come and go as they damn well please. Tell Station 3 to demand—demand, not request—identification.”

“The Station Commander has already done that, Commodore. But there’s no reply.”

“And Station 3 doesn’t run to a Psionic Radio Officer. I always said that we were ill advised to get rid of the telepaths as soon as our ships and stations were fitted with Carlotti equipment …” He paused, then asked, “Landing approach?”

“No, sir. Station 3 hasn’t had time to extrapolate her trajectory yet, but the way she’s heading now it looks as though she’ll miss Lorn by all of a thousand miles and finish up in the sun …”

“They haven’t had time?” Grimes’ voice was cold. “What the hell sort of watch are they keeping?”

“A good one, sir. Commander Hall is one of our best men—as you know. It seems that this ship just appeared out of nothing—those were Hall’s own words. There was no warning at all on the Mass Proximity Indicator. And then, suddenly, there she was—on both M.P.I, and radar …”

“Any of your people loafing around these parts?” Grimes asked Sonya. “No,” she told him. “At least not that I know of.” “And you are—or were—an intelligence officer, so you should know. H’m.” He turned again to the box. “Captain Cassidy, tell Station 3 that I wish direct communication with them.”

The Commodore strode to his desk, sat down in his chair, pulled out a drawer. His stubby fingers played over the console that was revealed. Suddenly the window went opaque, and as it did so the lights in the office dimmed to a faint glow. One wall of the room came alive, a swirl of light and color that coalesced to form a picture, three dimensional, of the Watch House of Station 3. There were the wide ports, beyond the thick transparencies of which was the utter blackness of Space as seen from the Rim Worlds, a blackness made even more intense by contrast with the faintly glimmering nebulosities, sparse and dim, that were the distant, unreachable island universes. Within the compartment were the banked instruments, the flickering screens, the warped, convoluted columns, each turning slowly on its axis, that were the hunting antennae of the Carlotti Beacon. Uniformed men and women busied themselves at control panels, stood tensely around the big plotting tank. One of them—the Station Commander—turned to face the camera. He asked, “Have you the picture, Commodore Grimes, sir?”

“I have, Commander,” Grimes told him. “How is the extrapolation of trajectory?”

The scene dissolved, and then only the plotting tank was in Grimes’ screen. In the center of it was the dull-glowing (but not dull-glowing in reality) globe that represented the Lorn sun. And there was the curving filament of light that represented the orbit of the strange ship, the filament that extended itself as Grimes and Sonya watched, that finally touched the ruddy incandescence of the central sphere. This was only an extrapolation; it would be months before it actually occurred. There was still time, ample time, for the crew of the intruder to pull her out of the fatal plunge. And yet, somehow, there was a sense of urgency. If a rescue operation were to be undertaken, it must be done without delay. A stern chase is a long chase.

“What do you make of it?” Grimes asked Sonya.