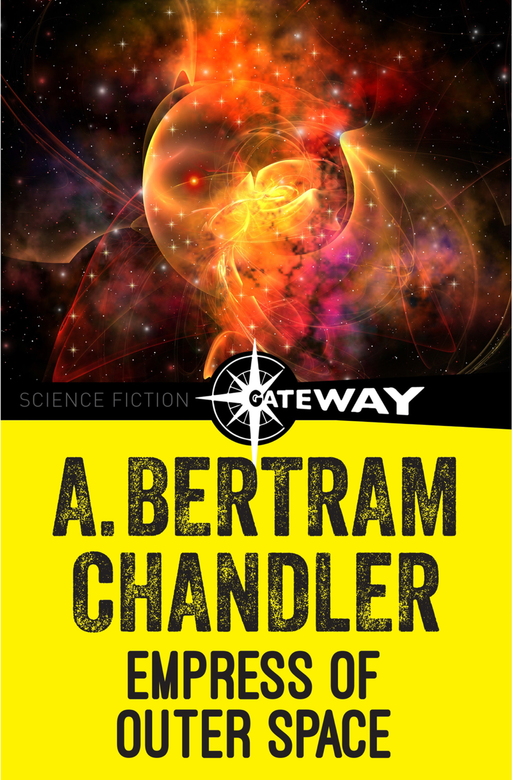 Her Imperial Highness Empress Irene is in trouble. She needs to prevent the take over of the universe by the power hungry Mortimer Jones . . .

EVERYTHING WAS OVER BUT THE SHOOTINGS.

Trafford, sitting in his tent and moodily sipping a glass of the local brandy, winced at the crash of each volley. Even through the double walls of tough inflated plastic the noise carried well, too well. War, thought Trafford, was a dirty business—and even dirtier was the tidying up after a war. Not that this had been a real war. It had been no more than the suppression of a very minor revolt, or mutiny, on one of the very important planets of the Empire.

Technically, any world upon which a Survey Service ship made a landing—and which did not possess the fire power either to destroy such a vessel or to force her to withdraw—was absorbed into the Imperium. Captain Mortimer Jones had made his landing on a hitherto undiscovered planet whose humanoid inhabitants had yet to undergo the rigors of an industrial revolution. And there Captain Jones, unwisely assuming that he was beyond the reach of the long arm of the Empress, had attempted to found his own peculiar kingdom. Unluckily for him, a few of his officers had been more loyal to their Service than to their Captain and, escaping in one of the ship’s boats, had made it back to Earth, there to tell their story.

The Empress had not been amused. Not only had she despatched a punitive expedition without delay; she, herself, had assumed personal command of it. And now, after one fusion bomb and a certain amount of playing around with laser projectors had clearly established the might of Imperial Earth, Captain Jones’ officers and men were being executed, one by one, in the full view of the surviving populace, with all the archaic ritual of the stripping of braid and buttons and decorations, the leveled rifles, the rattling discharges and the smoke and the stink of burned cordite.

But Jones was to stand his trial on Earth. Jones was to be made an example to his fellow Terrans. Jones had been too ambitious—and so, instead of being kept up with, he had been caught up with. But Trafford found it hard to feel sorry for Jones. In the past few days he had learned a great deal about the odd theocracy that the Captain had imposed upon the natives of Shaula VI—or, to give the world the name it was called by its inhabitants, Serengor.

Trafford gulped down the last of the rough brandy and decided to make a start on his report. He was not looking forward to it. He was a spaceman, not a policeman. But, although he held his Commander’s rank in the Executive Branch of the Service, he had accompanied the punitive expedition as an Intelligence Officer. It so happened that he had served in Jones’ ship, the Starquest, just prior to the survey voyage on which the landing had been made on Serengor. He knew Jones at least as well as the average second-in-command ever gets to know his Captain. He knew Starquest’s officers and petty officers and the more outstanding personalities among her ratings. And so it had not been altogether surprising that some genius in Personnel, Space-going had decided that Trafford would be ideally qualified to play his part in the interrogation of Starquest’s people. Naval Intelligence had not been overly enthusiastic, resenting the admission of an outsider into their esoteric branch of the Service, but Naval Intelligence had been overridden.

And so here was Trafford—a little man with close-cropped sandy hair, with gray eyes that were startlingly pale against the deep space-tan of his seamed, rugged face, and who, even stripped of his black-and-gold uniform, would have looked like what he was, a spaceman—sitting on a folding stool in an igloo of inflated plastic, glowering at the portable typewriter that sat on the folding table, glowering back at him, demanding his attention.

From outside came the crash of yet another volley. Trafford wondered who it was this time. Crandall, the Navigator? Petersen, the Gunner’s Mate? Somebody with whom he had shared bottles and swapped stories, or somebody whom he had disliked intensely?

But brooding about it would do nobody any good. Roughing out the initial report would take his mind off what was happening outside. But writing is done in the mind as a preliminary to the physical work of setting the words down on paper, and before Trafford could set a tentative finger to the keyboard he had to marshal his facts and—after all, that was one of the reasons why he was here—his opinions.

To begin with, the story was not an uncommon one—although such cases had been far more common in the days of the First Expansion, before the establishment of powerful, Earth-based naval forces. Jones had come. Jones had seen. And Jones had conquered. Even the comparatively light armament of a Survey Ship had been more than a match for swords and pikes and crossbows.

So far, it was all much of a pattern. Many a semi-piratical tramp master had established a kingdom this way, and now and again (if there had been a supply of human females ready at hand) even a dynasty.

But why, in this day and age, should a high ranking naval officer disregard his oath of allegiance, to say nothing of the tradition of his service?

There were personalities involved. When Trafford had sailed under Jones he had been told nothing by the Captain himself, but there had been the usual fine, flourishing crop of shipboard rumors, some of them obviously based upon fact. It was common knowledge that Jones had been an A.D.C. to the Empress, and in this capacity he had had the run of the Palace. It was rumored that there had been a scandal—very thoroughly hushed up, but a scandal nonetheless. It concerned Jones and the Empress’s stand-in, the Lady Eleanor. So Jones had been returned to Deep Space duty, and as Captain of a Survey Ship rather than of a fighting vessel. And Jones, about this time, had turned religious, becoming a member of the Reformed Church of the Atom. Trafford had read some of the pamphlets put out by this organization, and had not been impressed by their attempt to combine over-simplified nuclear physics with Old Testament imagery.

So, in a rough sort of way, it made sense. Sexual frustration, professional failure (the Survey Service appointment was practically a demotion—a spell of duty as A.D.C. was usually the preliminary to promotion to Flag rank), and, as the last unsavory ingredient, a dollop of one of the more hysterical evangelical religions.

That was why Jones, after he had come, seen and conquered, had made his departure from precedent. Explorers in the past had set themselves up as kings, but Captain Jones had become a self-appointed High Priest. Making a great show of the technology at his command he had preached the Gospel, that of Nucleon, the Power God. Nucleon, as prompted by his Chief Minister, hurled lightning bolts around with lethal enthusiasm. The temples of the indigenous gods and goddesses had been destroyed, spectacularly, and their priests and priestesses, together with a large number of still-faithful worshippers, with them.

Even so (Trafford admitted) the short-lived rule of the High Priest Jones had not been all bad. Large scale—and sorely needed—irrigation projects had been initiated, and there had been the beginnings of weather control. Every temple raised to Nucleon was also a power station, so that the god, after due propitiation, had been able to bless his newly conscripted people with light, and heat and—although this last project had barely gotten under way—rapid and efficient transportation.

But the old adage still held true. All power corrupts—and absolute power corrupts absolutely. Nucleon had soon proven himself to be even more bloodthirsty than his predecessors, and the human sacrifices that he demanded—the incineration of the victims by blinding, crackling electric arcs—had been far more spectacular than the old-fashioned ceremonial garroting of the occasional stubborn heretic.

Then there had been the impressing of the more attractive women—the Serengorese were a handsome people and, in all essential details, human enough—to become handmaidens to the High Priest and the lesser priests. Following upon this had been the wiping out of a few towns and villages, whose men had unwisely and violently objected to the enslavement of their wives and daughters, by the laser projectors of Jones’ low-flying Starquest.

It could not be denied, thought Trafford, that Jones had been of some service to the world that he had discovered and exploited. But it could not be denied that he had charged heavily, far too heavily, for his services. And now, in a fury of righteous indignation, the Empress was making sure that no other Survey Service officer would feel tempted to follow the bad example of Captain Mortimer Jones.

There was the crash of another volley, and another.

Trafford tried hard to concentrate on his notes, but found it impossible. Who was it this time? Fordham, the Meteorologist? He had pleaded for Fordham, urged that he be allowed to stay on this planet to continue his work, although stripped of his priestly rank and trappings. But Fordham, he had been told sternly, was a mutineer like all the others. Legally speaking he was, but …

Trafford shrugged dejectedly, poured himself another glass of brandy.

Then he set the tumbler down hastily on the folding table. Some of the brown fluid slopped over the rim of the glass, staining the folder in which his notes were clipped. But this was of no importance. What was important was the wailing of sirens and, high and clear over the dismal ululation, the brazen, amplified notes of a bugle call.

What was important was the screaming thunder of a salvo of ground-to-air missiles, answered by screaming thunder that beat down from the heavens, by heavy explosions somewhere not far distant, the blasts of which flattened Trafford’s tent, knocking him to the ground among the tangled wreckage of chair and bed and table and typewriter.

He got to his feet somehow, clawing his way up through the shredded plastic. He was dimly conscious that his face and the front of his uniform were wet, thought that he must have been injured, perhaps badly, by one of the flying shards of metal that had demolished the camp. But the moisture seeping through his lips was brandy, not blood.

The bugle was still calling.

But I have no action station, Trafford told himself sourly. I’ve no ship. I’m no more than a temporary, acting policeman—and this is far too big a job for an honest cop. He looked up at the dark sky, then hastily shut his eyes against the. . .