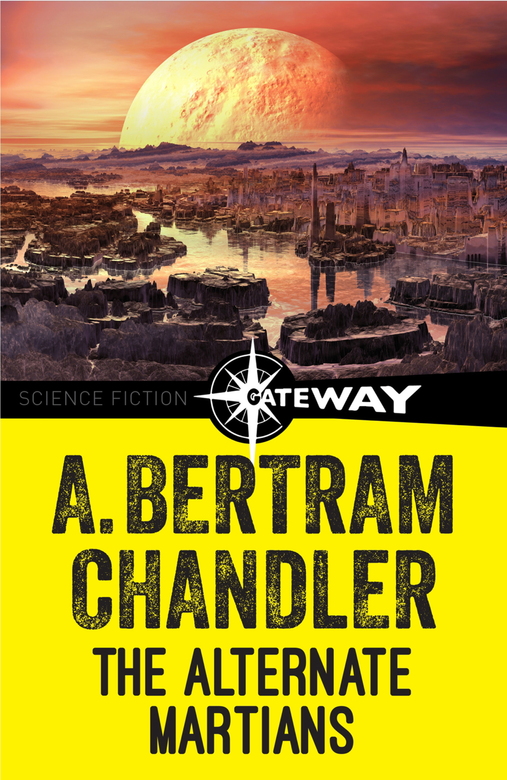 A space expedition to Mars find themselves in the worlds of H.G. Wells, Edgar Rice Burroughs and Otis Adelbert Kline.

SCIENCE CITY, the only settlement on the desert planet Venus, does not extend a hearty welcome to guests. The “Mad Scientists,” as they are called by the respectable research workers with their laboratories on the Earth, the moon, Mars and the various Space Stations, are not the sort of men and women to suffer gladly those whom they consider fools. Brilliant they are, and off-beat, and engrossed in their work, and they would never have the patience to explain things to an inquisitive visitor. In the extremely unlikely event of there being an inquisitive visitor, such a person would speedily wish himself elsewhere, as the “Mad Scientists” are all engaged upon lines of research of such a character that an experiment gone wrong might well have utterly disastrous consequences. So, to all intents and purposes, they have been exiled by the Central Government to what is, without doubt, the most valueless hunk of real estate in the Solar System, an arid dust-bowl of a planet with no indigenous life save a few obnoxious viruses, with no precious or useful minerals, so constituted as to make the cost of terraforming utterly prohibitive. If any world is going to get blown to smithereens, some highly placed Civil Servant must have reasoned, it might as well be Venus.

Christopher Wilkinson, lately Second Officer of the liner Venus Queen, could not be classed as a guest; his status was almost that of one of the family. Normally a spaceman paid off from his ship for medical reasons—in Wilkinson’s case it had been an unpleasant virus infections—would have been accommodated at the Spaceport Hostel on his discharge from the hospital, there to await repatriation to Earth when fit to travel, enjoying (or otherwise) no contact whatsoever with the inhabitants of Science City. This would have been the pattern of events for Wilkinson had not a certain Dr. Henshaw of the Advanced Physics Laboratory required a guinea pig—one with teeth, claws and intelligence, with the ability both to observe and to make a detailed report upon such observations. Wilkinson, for reasons of his own, had agreed to act as Henshaw’s guinea pig. He had hoped that if the scientist’s time machine did work it might be possible for him, sent back a year or so into the past, to do something to avert the Martian Maid disaster or, failing that, to make certain that his fiancée, Vanessa Raymond, was not among the passengers aboard that ill-fated vessel.

It had been a past from the perils of which—a ruthless Dictatorship, a hunted Underground—Wilkinson had saved Vanessa, and from which he had, at the finish, barely escaped himself.

And—this was the utterly fantastic part—it had been a past, not an alternate universe.

Wilkinson had been sent back into the past, as promised by Henshaw, and had made the jump from one of the Coils of Time to another.

WILKINSON AND VANESSA walked slowly through the tunnel that led from the Advanced Physics Laboratory, where they were accommodated, to the Advanced Biology Laboratory. Wilkinson was in uniform, tall in his black and gold, his cap perched at a jaunty angle atop his unruly mop of sandy hair. The girl was dressed in a simple dress that she had borrowed from one of the female laboratory assistants. It was little more than a sack of gaily patterned synthetic fiber, but she did something for it, and in return it did something for her. The bright colors enhanced and complemented the glowing, golden skin of her arms and shoulders and legs, matched, somehow, the violet of her eyes, contrasted with the lustrous blackness of her hair. The fabric clung to her curves, hinting at the perfections that lay beneath.

She was saying, “But what does Dr. Titov want us for, Chris? Surely, by this time, the pair of us have told him everything he could possibly want to know.”

“He’s a scientist,” Wilkinson told her, “and he’ll always want to know more. But I agree that we’ve told him everything that we could tell him. Our brains have been sucked dry of all information, relevant and otherwise.”

“So it’ll just be a pleasant social evening. To judge from my own past experience, Titov likes playing the genial host. He enjoys the good things of life, and enjoys sharing them.” He went on, “You’ve never been in the Biology Dome, have you? You thought that Henshaw and his colleagues did themselves well—but the Biology boys do themselves a damned sight better. Their Common Room could be a park, and a very well kept park at that, back on Earth. A wall-to-wall carpet, almost a square mile of it, of beautifully kept grass, with an ornamental stream and a small lake. The inner surface of the dome simulating a summer sky, clouds and all. Flowering trees and shrubs …”

She smiled. “We had all that on Venus, Chris … my Venus.”

“But with your own yellow sky. And with no outdoor tables, and no pretty waitresses bringing cold drinks.”

Wilkinson laughed. The Biologists’ Bunnies could have been classed, perhaps, as hussies, but overdressed they were not. But on Vanessa’s steamingly hot world the rig of the day had been nudity—with sidearms. He asked, “How did you know about the Bunnies, anyhow?”

“Olga told me. She used to be one herself. She showed me photographs.”

“What does it matter? We’ll enjoy ourselves; Dr. Titov knows how to look after his guests. At least he’ll give us real whisky, not that muck that your people made from moss.”

“If I hadn’t escaped in time,” he told her quietly, “the Committee would have wrung from me the knowhow to launch an offensive against Earth and Mars, and possibly against this universe as well …” He could not suppress a shudder at the memory of Moira Simmons’ interrogation chamber.

“You needn’t be. I’d expect you to be loyal to Claire and the others. And to the memory of them. But there are so many problems. That machine of Henshaw’s is still far too chancy in its operation. If he could send a small, well-armed force back to the time, on your continuum, when the Committee was just getting ready to take over …”

They came out of the tunnel, through an archway of trained bougainvillea, into the dome that housed the Common Room of the Advanced Biologists. Titov advanced to meet them over the green, closely cropped lawn, his white smile vivid in his darkly tanned face, his hand outstretched. “Welcome aboard, Wilkinson,” he said. “And you, Vanessa, are doubly welcome.” He shook hands with them, then turned to lead the way across the velvety grass, making a slight detour around the small flock of slowly grazing sheep, pointing out with pride the various exotic Terran plants flourishing in their well-tended beds, and the great golden carp that swam lazily under the quaint Japanese bridge over the stream. And then, to Wilkinson’s surprise, he realized that they were being taken to the entrance of another tunnel, to the passageway that led to the Accommodation Dome. But if Titov wished to entertain privately, in his own suite, that was his privilege.

The biologist’s quarters were not quite luxurious, but they were a little more than merely comfortable. The livingroom was almost a conservatory. The study, into which they were taken, had one wall which was a tank in which brilliant fish were a fascinating, living kaleidoscope. The other walls were lined with books. There was a paper-littered desk, and four comfortable lounge chairs, with side arm rests upon which a glass could be placed without risk. Then, after Titov and his guests were seated, a tall, red-haired girl came in with a tray loaded with bottles, glasses, a bowl of ice cubes and another of lemon slices. This she put down on a low table. There was a brief flurry of introductions, during which Wilkinson and Vanessa learned that Natalie Weldon was Titov’s personal assistant, and guessed that the title covered a multitude of duties.

“I prefer the personal touch when it comes to dishing out liquor,” grinned the biologist. “I can always taste the tin in the drinks dispensed by those blasted robots in Physics … But name your poison, Vanessa.”

“Then let me recommend this sherry. A quite fair Amontillado. And you, Wilkinson?”

“I’ll keep you company. And I needn’t ask what you’re drinking, Natalie. I see you’ve brought the fixings for your not very dry Martini.”

“The laborer is worthy of her hire, Boris.”

“I hope so.” He turned to the others. “She’ll be telling us next that she’s been sweating and slaving all afternoon over a hot stove.”

Vanessa’s eyebrows lifted in surprise. “But I thought you people did everything by machinery, Dr. Titov.”

“Not everything, my dear. And not everybody. Oh, I know that the low mechanicians in Physics devour, with much smacking of lips, horridly standardized meals mass-produced by their autochef—but most of us, in Biology, prefer the personal touch. Tonight, for example, paper-thin pancakes with a kidney filling and a curry sauce, followed by a fruit salad, the raw materials for which came from our own orchards, not out of tins. The hock to go with the main course is imported from Earth, but with the sweet there’s a dessert wine that we’ve processed from the grapes that we grow ourselves. It’s not at all bad.”

“It’s a wonder that you have any time for research,” said Wilkinson.

Titov laughed. “The old myth that a man’s not earning his money unless he’s uncomfortable dies very hard. And comfort is more than a sound roof over one’s head. Comfort is also a well-lined belly—and by well-lined I mean well-lined with good food, well and imaginatively cooked, ac. . .