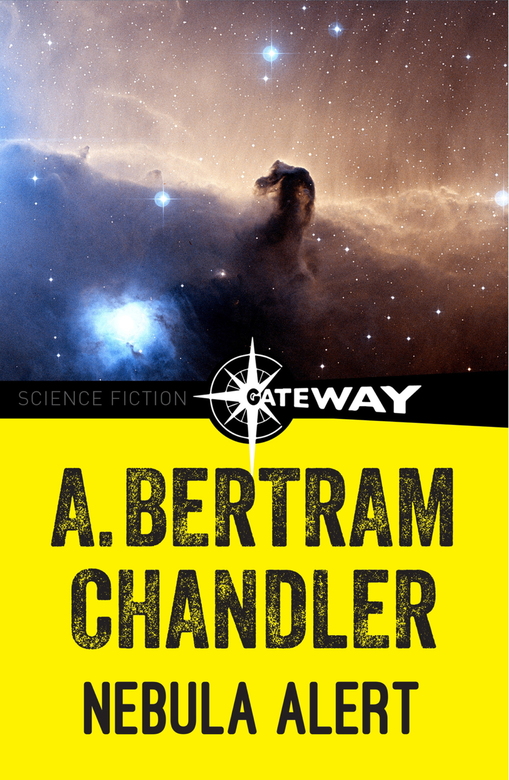 The Iralians were humanoid and techically free citizens of the Galactic Empire. But as slaves they were prized above all others, for they had the unique capacity to transmit acquired knowledge through heredity. And so when the space mercenary Wanderer was hired by GLASS (Galactic League for the Abolition and Supression of Slavery) to take a cargo of Iralians home it was going to be a simple task! For one thing, they'd be hunted by interstellar slavers for their priceless passengers. For another, the Iralians themselves had other ideas which included mutiny and high treason. And for the third and worst, they were too close to the Horsehead Nebula, whose capacity for warping time, space and the dimensions was a permanent Red Alert for all spacecraft.

THIS WAS KARAKELLA, a windy world, with katabatic gales sweeping down from sharp-peaked, snowcapped mountains, driving airborne torrents of golden leaves and crimson windflower blossoms through the steep-sided canyons that were the streets of the cities. This was Karakella, whose proud people rode the storms on wide-stretched wings, disdaining mechanical aids, shrieking their defiance to the forces of Nature.

And this was Port Karakel, a city small in area but with its buildings towering high into the turbulent sky, steeples of metal latticework, each topped with its weathervane wrought to the semblance of a crowing cock. It was set on a hilltop, buffeted by every wind, washed clean by the racing air currents that brought with them the sharp tang of the snows of the high places, that scoured the spaceport apron of every scrap of debris, that were bitterly cold but invigorating, veritable elixir after the stale, cycled and recycled atmosphere of a spaceship.

This was Port Karakel—and there stood the ships. There were the locally owned merchantmen—featureless metal o-voids squatting in the skeleton eggcups of their landing gear. There were two frigates—cigars rather than eggs, their sleekness marred by the protuberances that proclaimed the possession of heavy armament. And there was that other alien. No spaceman, of whatever race, would need to look for the winged, green globe embossed upon her bows to know that she was Earth-built. Beneath the badge, in letters of golden metal, was her name—Wanderer.

There was work in progress about her hull—the intermittent flare of welding torches, a busy grouping of technicians, some of them the tall, avian natives, two of them human, clad in coveralls that had once been white but that were now grease-and soot-marked. Another human being, bundled up against the cold in heavy, drab gray clothing, leaning into the wind, was making his way slowly from the spaceport administration buildings towards the ship.

The smaller of the two white-clad humans saw him first. He said respectfully, “Ma’am, we have company.”

The woman carefully thrust the small testing hammer that she had been using into her belt, turned to look. The wind, blowing around the hull, whipped strands of yellow hair from under her cap, blew them across her eyes. Irritably she used her free hand to clear her vision, leaving a dirty smudge across the golden tan of her face. It was to her what a beauty spot is to other women, enhancing her handsomeness rather than marring it.

She remarked, her intonation sardonic, “Our Mr. Smith. The man from GLASS.” She smiled briefly. “No doubt he has something for us. And I can’t trust my everloving husband to handle ship’s business by himself, even though he is on the Register as Master.… Will you carry on here, Mr. Bronheim, while I see what’s cooking?”

Ignoring the ladder, she slid down one of the uprights of the scaffolding to the ground. The wind behind her, she advanced swiftly to meet the representative of the Galactic League for the Abolition of Suppression and Slavery.

They were seated in the commodious Master’s dayroom aboard Wanderer. There was Captain Trafford—a little, wiry man, with close-cropped sandy hair, sandy brows over bleak gray eyes, a seamed, rugged, deeply tanned face. He looked like a spaceman (as he should have done) and yet, somehow, did not look like a star-tramp Master. His uniform was too neat, too correct. Somehow, somewhen the Imperial Navy had put its indelible stamp upon him.

There was Mrs. Irene Trafford, his wife, First Mate and owner. She had removed her coveralls and was now, like her husband, in uniform. She looked the part of a merchant officer far better than he did. It was not that her attire was in any way slovenly: the scarlet, polka-dotted cravat filling the open neck of her shirt added a touch of color to the severe black and gold of her dress—incorrect, nonregulation color, but color nonetheless.

Then there was the slender, auburn-haired Susanna, Radio Officer and Purser, correctly enough rigged—but conveying the impression that the rigging had been carried out by a Parisian couturier.

There was Irene, who had been Empress-Elect of the Federation (and who, prior to her accession to the purple, had been Mate of a Dog Star Line tramp); there was Trafford, her husband, who had held the rank of Commander in the Imperial Navy; there was Susanna, onetime Lady-in-Waiting to the Empress, who had stayed with her mistress after the abdication.

There was Mr. Smith, that extraordinarily ordinary looking man. He was wearing, as always, a drab gray coverall (but well cut, and from cloth of excellent quality). There was Mr. Smith, with his face-shaped face, his hair-colored hair, his eye-colored eyes. Even so, his reputation was rather more flamboyant than his appearance. A latter day Robin Hood, he had been called by one sensational journalist—but this Robin Hood hired his archers and had never been known to bend bow himself. Nonetheless, he and his organization were a thorn in the side of tyrants—and an even sharper thorn in the side of those ostensibly democratic governments that put policy before principles.

Rather pointedly Smith ignored her. “Captain Trafford,” he said, “I may have another charter for you.”

“Mrs. Trafford is the owner,” replied Trafford, with a slight grin. “I’m only the Master.”

Smith shrugged, turned to Irene. “As you please. Mrs. Trafford, I may have another charter for you.”

“May have?” she echoed impatiently. “Have you or haven’t you?”

“All right. I have another charter for you. If you want it.”

“I think that you’ll find it so. Passengers, this time. Two dozen Iralian nationals, surplus embassy staff, to be returned to their home world.”

“We haven’t the facilities,” said Trafford.

“You have the space, Captain, as I recall it, ships of Wanderer’s class are so designed that they may easily be converted to troop transports.”

“The ships of Wanderer’s class in the Imperial Navy are light cruisers. This is a private yacht.”

“Don’t be so stick-in-the-mud, Benjamin,” Irene admonished her husband. “We’re running this ship to make money. Anything that we can carry for profit we will carry. As Mr. Smith has pointed out, we have ample space. And the Kokreli dockyard workers are capable of making a fair job of the modifications required.” She turned to Smith. “And who pays for that, by the way?”

“But,” persisted Trafford, “What about stewardesses, and galley staff and all the rest of it? Personnel-wise we’re running this ship on a shoe string. If we engage catering staff it will cut into our profits. In any case, where should we get them from?”

“My husband has a point there,” admitted Irene.

“It’s already been considered,” Smith told her. “The Iralians will police their own quarters. Given galley facilities, they will prepare their own meals.”

“And they will have their own galley,” insisted Irene. “Airlocked off from the rest of the ship. I know what Iralian cookery smells like.”

“That can be arranged easily enough.”

“Good. And, of course, steward’s stores for the voyage will be supplied by the Embassy.”

“Now we come to the sixty-four dollar question. How much do we get paid?”

Irene turned to Susanna. “Do your sums, Sue. Allow for a voyage of, say, seven weeks subjective.”

The girl busied herself with slipstick and scratch pad. “We might just show a profit, ma’am.”

“Not good enough, Mr. Smith. Luxury Class fares it will have to be.”

“And not a single ton of cargo or bag of mails earning freight. You can make money on passengers only if you carry ’em in bulk. And if these Iralians want to get home in a hurry they’ll not want to wait months for a conventional merchantman to drop in here. After all, the Kokreli are still officially at war with the Hallichecki …”

“And a War Risk Bonus to all hands until we’re clear of this sector. To be paid by the charterers.”

“Anything else?” asked Smith resignedly.

“I can’t think of anything at the moment. And as far as the Luxury Class fares are concerned, it may have to be more. Susanna’s no slouch at the pursering, but I’d like to be able to work things out in greater detail before we clinch the deal.”

“As long as your facts and figures are reasonably convincing and your demands not too outrageous I think that the Iralians will pay.”

“One last question. What’s the catch?”

“KNOWING SMITH,” grumbled Trafford, “I also know that there must be a catch. There must be some chestnuts, somewhere, that we’re supposed to pull out of the fire for him.…”

“How right you are,” agreed Irene. She looked around the wardroom at Tallentire, Second Mate and Gunnery Officer, slim and darkly intense, something of the hunting cat about him, something of the gangster, at the stocky, stolid Bronheim, Wanderer’s Engineer, at Metzenther, the gangling, wispy bearded Psionic Communications Officer, at Susanna. “Have any of you people any ideas on the subject?” she demanded.

There was a long silence.