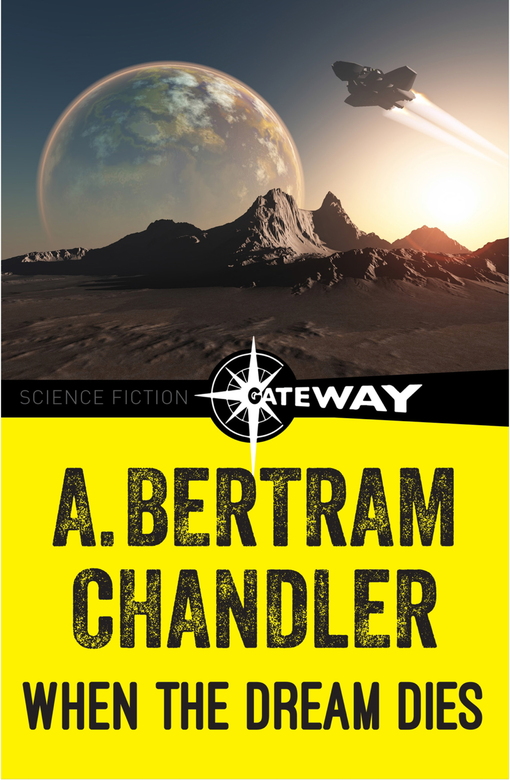 ALAN KEMP HAD A DREAM FEW SPACEMEN EVER SAW COME TRUE. BUT IN THE RIM WORLD ANYTHING IS POSSIBLE... Alan Kemp was a man obsessed. Stranded with his crew on the Rim planet Elsinore, he saw a chance to realise that dream - and took it. When a gausjammer crash-landed on Elsinore, Kemp rebuild the second-hand, obsolete starship and set out to establish a shuttle between the Rim planets. But before they reached their destination, Kemp and his comrades were waylaid by an alien colony. A colony inhabited by giant mechanical spiders who imprisoned their captives in a palace of pleasure whey the chance - or desire to escape - is precisely zero.

Alan Kemp, when I first met him, was Chief Officer of the old Rimhound. He was a typical enough Rim Runners officer inasmuch as he, like most of us in such employment, had served in big ships before coming out to the Rim. He retained a dignity, almost a pomposity of bearing that didn’t match either the shabbiness of his uniform or the decrepitude of his vessel. For the rest, he was a big man, tall, grey-haired, and with the bleak blue eyes that spacemen always seem to own in fiction but so seldom do in fact. But he was, once you got to know him, once you got past his reserve, a good shipmate and a good friend. Had he not been so the rest of us would never have accompanied him in his venture.

Old Jim Larsen was Rimhound’s Second Interstellar Drive Engineer. We all called him ‘Old Jim’. On meeting him for the first time, the impression of extreme age was the one that presented itself. But then you became aware of alertness, aliveness, of the somehow indestructible youth that looked out from behind his grey eyes. And this made nonsense of his bald head, withered frame and wrinkled face.

Nobody knew just how old he was. His Chief Interstellar Engineer Certificate had been folded and refolded so many times that the date of birth recorded on the piece of parchment was illegible. It was strongly suspected that this date was nothing like the one that he used when signing ship’s Articles. Also, his Certificate carried an Ehrenhaft Drive endorsement, and the last of the Ehrenhaft Drive ships, the gaussjammers, was broken up before I was born.

Dudley Hill was Third Mate. Like Kemp, he had served in the big ships of the Interstellar Transport Commission. Unlike Kemp, he had not waited until he was a senior officer before he had resigned from the Commission’s service. Rumour had it that he had been asked to resign, that he had been implicated in the collision of Beta Scorpii with an asteroid in the Rigellian planetary system.

Rumour had it, too, that he had been made the scapegoat and that Beta Scorpii’s Master, who possessed powerful friends in the Commission’s upper hierarchy, was responsible for the error of judgement that resulted in the near-wreck. However, Rim Runners, chronically short of officers, asks no questions, and Dudley was as sober and reliable a spaceman as any on the Rim, and more so than most.

Anyhow, we’d served together aboard Rimhound for some months. We’d got to know each other, had learned a great deal about each other’s backgrounds. I’d met Alan’s wife – he was the only one of the four of us who was married – quite a few times when the ship was in at Port Farewell, on Faraway, and each time I had envied Alan.

Veronica doesn’t come into the story as a person, as a matter of fact, although her influence played a great part. Veronica was lovely. She was Carinthian, and if you’ve ever met a typical woman from that planet you’ll be able to guess what she was like. I don’t know why or how it is, but human stock on Carinthia seems to have mutated slightly, to have developed along the lines of the Siamese cat. That, I know, is biological nonsense, but it’s the best way of giving an impression of the colouring of Carinthian women, the sleekness, the grace. If you like Siamese cats – and I do, and Alan did – you’ll like the women of Carinthia.

Alan had met Veronica when she was travelling out to the Rim in the old Delta Sextans, of which vessel he was Chief Officer. He’d fallen for her, hard. He’d have been willing to have made his home on any planet of the galaxy as long as she was there, but I’m inclined to think that he was rather shaken when she announced her firm intention of living on Faraway. The Interstellar Commission doesn’t maintain anything like a regular service to the Rim and so, throwing away his years of seniority, Alan left them and joined Rim Runners.

So there we were, the four of us, in Rimhound when she was switched off the usual tramlines – the Lorn, Faraway, Ultimo, Thule and Eastern Circuit run – and chartered to the Shakespearian Line. It made a change. It was a plunge in towards the Centre, although not a very deep one. The Shakespearian Sector may not be officially regarded as part of the Rim, but it’s so far out that the night skies of its worlds display only a sparse sprinkling of stars.

We carried a full cargo of agricultural machinery from Port Farewell, on Faraway, to Port Fortinbras, on Elsinore. It was our luck – bad luck, we thought at first – to arrive there in time for the beginning of the Cargo Handlers’ strike, an industrial dispute that dragged on and on.

As a result of this long period of enforced idleness there was ample planet leave. And there was, too, ample time for those of us with wives and families to become more than usually browned-off with a means of livelihood that made long periods of separation inevitable, that entailed the occasional lengthening of such periods by the stubbornness of trade union leaders and employers of labour on distant worlds.

Of the four of us, Alan Kemp was the most browned-off. We were not surprised. We knew him well by this time, knew his moods, knew that even a month away from Veronica was, for him, little short of eternity. I know this much, too. If I’d been married to her my spacefaring days would have been over, even if the only shore employment offering had been shovelling sludge in the sewage conversion plant. But Alan was different.

Even so, there could have been far worse worlds for a holdup than Elsinore. It’s a pleasant enough hunk of dirt. The land is mainly flat, and fertile and well wooded. There are no extremes of temperature except at the Poles and at the Equator. There are almost no heavy industries. The people are an outwardly stolid breed, running to blondness and fatness, both men and women.

In spite of their stolidity, or because of it, they are inveterate gamblers. They gamble on the turn of a card, on the fall of a coin or the dice. They make wagers on horseraces, on dograces, on races between representatives of such of the indigenous fauna as are noted for fleetness of foot or wing. Every town, every village, even, boasts its casino. Then, to rake in such folding money as may still be floating around, there are private lotteries, and municipal lotteries, and state lotteries.

Oddly enough, none of us was a gambler. Come to that, we were rather deficient in all the vices – with the exception of old Jim Larsen – leading, by Rim Runners’ standards, lives of quite exceptional virtue. But after a few weeks of Elsinore we began more and more to frequent the taverns in and around Fortinbras. Alan Kemp was not often one of the party. About once a week, however, he would declare that he had to get off the ship before he was driven even farther round the bend than he was already, and join us.

He was always rather a morbid drinker and liked to drink in morbid surroundings. When he was with us we invariably finished the evening at the Poor Yorick, an establishment justly famous for its funeral decor. We would sit around a coffin-shaped table drinking beer from mugs that were facsimiles of human skulls – they even had the horrid feel of old bone – listening to the fine selection of funeral marches that was the only music obtainable from the jukebox, the casing of which was the work of a monumental mason. The dim lighting was by flickering, smoking tallow candles. The floral decorations took the form of floral tributes.

The night that it all started, the night that the dream began to come true, Alan was in fine form. There had been a mail in that morning – the Commission’s Epsilon Crucis, in-bound from the Rim – and there had been no letters for our Chief Officer. The inevitable result was that he was both sulking and worrying.

‘Space,’ he announced, for about the fifth time that evening, ‘is no life for a civilised man.’

‘You,’ I told him, ‘are not a civilised man. You know damn well that you could never settle down ashore. Ships are your life.’

‘That might have been true,’ he said, ‘before I met Veronica. It’s not true now.’

‘Then why don’t you just get the hell out of it?’ asked Jim Larsen.

‘You wouldn’t,’ I told him. ‘You’re too fond of being a big frog in a small puddle. You’ve been a senior officer too long, first in the Commission’s ships, then with Rim Runners. And you think that you might as well stick it out and become Master now.’

‘All right,’ he said. ‘Perhaps I do. But there’s only one way to be really happy as Master, and that’s to be an owner as well.’ He sipped his beer thoughtfully. ‘A little ship could be fitted in the Eastern Circuit without trampling on our revered employer’s corns too heavily. A shuttle service, say, between Mellise and Grollor.’

Old Jim laughed. ‘This is the world to get it on. What about the lotteries? If you aren’t in, you can’t win.’

‘The trouble is,’ I told them, ‘that money just can’t be taken off Elsinore. Currency regulations and restrictions and all the rest of it.’