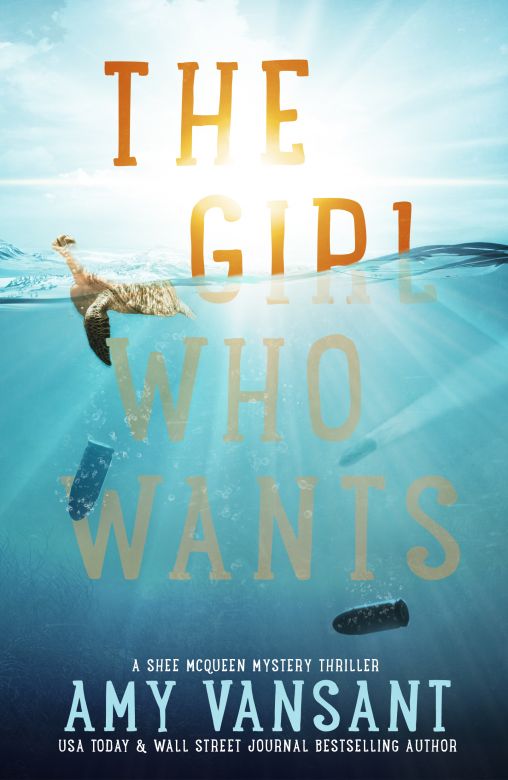 Shee McQueen grew up skip tracing and hunting military criminals with her father, Mick, until someone put a bounty on her head, forcing her underground. Resurfacing years later, she returns to her family’s hotel in Jupiter Beach, FL, to find Mick in a coma, shot in the head by an unknown sniper.

The Loggerhead Inn has everything Shee could want in a beach hotel---sea turtle wall art, a tiny Yorkshire terrier mascot who thinks she’s a pit bull, and her father’s staff of deadly, damaged military veterans, looking to redeem their troubled souls by helping others.  Not to mention--- Hold on...

How did Mason Connelly, the SEAL she fell for decades ago, just appear in the lobby? Why did he have to show up now demanding answers to secrets long buried?

Shee wants it all back.

But someone wants her dead.

From the moment Shee McQueen appears, The Girl Who Wants straps the reader into a twisting roller coaster ride of heart-stopping action, snappy dialog and intrigue. Shee’s quest to recover the life and loves she’s lost brings a depth of emotion rare in such a page-turning suspense. The unique female lead's funny, irreverent and all-too-human asides will have you rooting for her — and her whole pack of wild, wonderful misfit friends — until the breathless end.

Fans of Liane Moriarty, Carl Hiaasen, Donald E. Westlake, Janet Evanovich and John Grisham (without so many lawyers!) will love this exhilarating page-turner.

Shee realized her mistake the moment her feet left the grass.

She’d watched him drop from the side window of the house. He landed four feet from where she stood, and still, her brain refused to register the warning signs. The nose, big and lumpy as a breadfruit, the forehead some beach town could use as a jetty if they buried him to his neck...

His knees bent to absorb his weight and her brain thought, got you.

Her brain couldn’t be bothered with simple math: Giant, plus Shee, equals Pain.

Instead, she jumped to tackle him, dangling airborne as his knees straightened and the pet the rabbit bastard stood to his full height.

The math added up pretty quickly after that.

Hovering like Superman mid-flight, there wasn’t much she could do to change her tragic trajectory. She’d felt like a superhero when she left the ground. Now, she felt more like a Canadian goose staring into to the propellers of Captain Sully’s Airbus A320.

She might take down the plane, but it was going to hurt.

Frankenjerk turned toward her at the same moment she plowed into him. She clamped her arms around his waist like a little girl hugging a redwood. Lurch returned the embrace, twisting her to the ground. Her back hit the dirt and air burst from her lungs like a double shotgun blast.

Wheezing, she punched upward, striking Beardless Hagrid in the throat.

That didn’t go over well.

Grabbing her shoulder with one hand, Dickasaurus flipped her on her stomach like a sausage link, slipped his hand under her chin and pressed his forearm against her windpipe.

The only air she’d gulped before he cut her supply stank of damp armpit. He’d tucked her cranium in his arm crotch, much like the famous noggin-less horseman once held his severed head. Fireworks exploded in the dark behind her eyes.

That’s when a thought occurred to her.

I haven’t been home in fifteen years.

What if she died in Gigantor’s armpit? Would her father even know?

Has it really been that long?

Flopping like a landed fish, she forced her assailant to adjust his hold and sucked a breath as she flipped on her back. Spittle glistened on his lips, his brow furrowed as if she’d asked him to read a paragraph of big-boy words.

Making a V with her fingers, Shee thrust upward, stabbing into his nose, straining to reach his tiny brain.

Goliath roared. Jerking back, he grabbed her arm to unplug her fingers from his nose socket. She whipped away her limb before he had a good grip, fearing he’d snap her bones with his monster paws.

Kneeling before her, he clamped both hands over his face, cursing as blood seeped from behind his fingers.

Shee’s gaze didn’t linger on that mess. Her focus fell to his crotch, hovering a foot above her feet, protected by nothing but a thin pair of oversized sweatpants.

Shee scuttled back like a crab, found her feet and snatched her gun from her side. The gun she should have pulled before trying to tackle the Empire State Building.

“Move a muscle and I’ll aerate you,” she said. She always liked that line.

The golem growled, but remained on the ground like a good dog, cradling his family jewels.

Shee’s partner in this manhunt, a local cop easier on the eyes than he was useful, rounded the corner and drew his own weapon.

She smiled and holstered the gun he’d lent her. Unknowingly.

“Glad you could make it.”

Her portion of the operation accomplished, she headed toward the car as more officers swarmed the scene.

“Shee, where are you going?” called the cop.

She stopped and turned.

His gaze dropped to her hip.