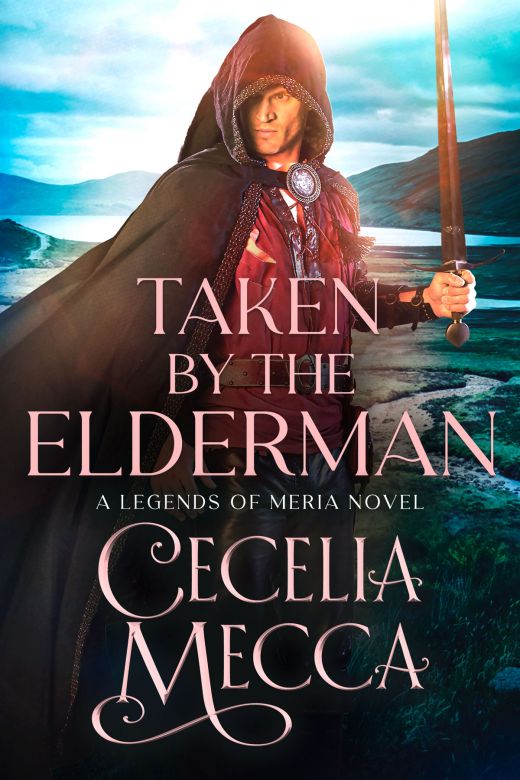 I’ve taken too many vows, including those of an Elderman, pledging myself to God, to be enticed by a woman such as Lady Hilla. I will not deviate from my mission because of a traitor, even one as intriguing as the princess.

Finally separated from the vile man I’d been forced to wed, I yearn to be reunited with my sister, the Queen of Edingham. My only goal is to aid her in bringing the vicious renegades to heel and reunifying our feuding kingdoms. It seems, however, that my mysterious new keeper has other plans for me.

From the dangerous Borderlands and the lush southern capital of Meria to the untamed wilds of the northern lands of Murwood End, two unlikely allies band together on a journey to save their kingdoms. From enmity comes forbidden love—while the Elderman’s secret identity, one that threatens to tear this new love apart forever, is revealed.

“Get your hands off of me.”

I did not survive these past two years to be taken prisoner now.

My sister’s men are mere yards away from us. But as I open my mouth to scream, tis promptly covered by a gloved hand.

I saw my opportunity to escape as my husband cowered inside the blacksmith’s shop. He yelled for me to return inside, of course. But I knew there was help to be had. All I needed to do was get to one of my sister’s men.

One glimpse of the glorious Tree of Edingham on one of the men’s surcoat, spotted through a crack in the closed window, was all I needed to summon the courage to finally leave the loathsome man responsible for me being here, in the thick of battle.

Ignoring the screams and relentless clanging of swords between my hateful husband’s men and innocent Merians that surely spell death for some, I sprinted to the door of the darkened shop, where Whitley hid like the coward he is, and tossed it open—and was at once grabbed from behind.

Now I try to turn around, to see my attacker. But his hands are like wrought-iron vices. One of his arms encircles my waist as he drags me effortlessly away from my salvation.

When I was accused of adultery, I did not fight.

When I was excommunicated from court, I did not fight.

When my husband came to my bed, I did not fight.

But now, as this hooded stranger whose robes mark him as an Elderman, drags me away from my sister’s men, away from the only thing I’ve lived for these past two miserable years—to be reunited with Cettina—I fight like the devil.

His voice is like a whip cracking against my resistance.

Farther and farther from the fight we move until the edge of the small village is just out of running distance. If he manages to get me into those woods, I am lost. And so, with every bit of strength, I push against his arm. To no avail.

Attempting to bite his cupped hand, and failing, I watch as the very husband who made my life hell these past two years is dragged from the blacksmith’s shop by the queen’s retinue, taking him captive for this unauthorized attack against the Merian village. As always, I do not fear for myself.

Nothing this man could do to me, short of slitting my throat, could compare to all that I’ve gone through since the day my father announced my betrothal to the aging Lord Whitley of the Edingham Borderlands. But without my account of what happened here today, the bastard could very likely use his silver tongue to escape persecution. Again. Whitley’s treachery against my sister must be exposed lest she remain in danger. Cettina must know he ordered the attack to draw Edingham into a war with Meria. One my sister does not want.

I hear the horse before I see him. Panic wells inside my chest, bubbling to the surface. Does he plan to take me with him? Why?

I cannot leave this border town. Not with Cettina’s men so close by.

He cannot get me on that horse and keep me silent all at once. We are not so far away from the village that my screams will go unheard. Tis my only chance.

Taking a deep breath after being trapped by my kidnapper, I prepare to run. Until I see the reason for my release.

Two men, my husband’s men, are approaching from behind. Swords drawn, they stare down my abductor without a glance at me.

Though one is hardly known to me, I am quite familiar with the taller of the two. One of many who’s guarded my door every step of our loathsome journey from our home at Redmare Castle to the ill-fated village of Craighcebor, his cruelty matching that of his master’s with no care for my well-being.

“She comes with me.” That emotionless response, from my captor, makes me curious to see his face. From my vantage point, I see only deep brown robes and a hood. What does the Elderman want with me? I’m not so naive to think his intentions are pure. Under the current Prima’s leadership, the actions of many of these supposed “men of God” leave much to be desired.

When my husband’s men step forward toward us, the Elderman warns them.

“One step closer and this morning’s sunrise will have been your last.”

My captor’s words manage to sound menacing but not exaggerated. As if he means each and every one.

But one churchman against two armed knights?

Tis only when the Elderman draws his sword that they stand down. My husband’s men, those with no qualms about attacking a village of innocents, men who appeared a moment ago so mighty and strong, turn and run.

They sprint in the opposite direction, leaving me alone with . . . not a simple Elderman. I’d not noticed his sword. My feet remain still even though this is my opportunity to run. He turns to me, his face still obscured by the hood.

“You are a Shadow Warrior,” I say.

His nonanswer is my answer. I resign myself to this new fate, for resistance to such a man would be the height of futility.