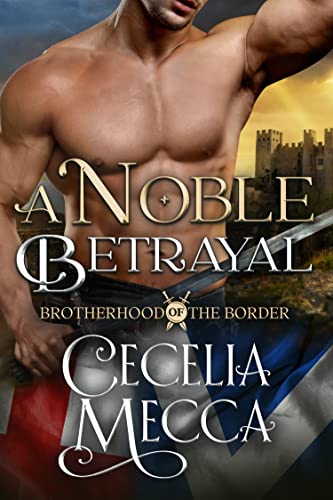 “I would protect you from everyone. . . from the king of England himself. If only I could trust you.”

Forced to marry the daughter—and would-be secret agent—of King Edward’s closest advisor as a consequence of His Majesty’s growing distrust of his family, Lord Waryn has a plan for his new bride. Install the spy in a little-used estate and turn his attention back to where it belongs—his family.

Lady Phillipa is given a simple but nonnegotiable task: report back any questionable activity by her new husband’s family, whom the king suspects of having ties to William Wallace. When Phillipa develops unexpected feelings toward Haydn, she’s forced to decide between her newfound loyalty to her husband, or defying the most powerful man in England.

Thirty years after the Border Series ends, a new saga of family, loyalty, and love along the turbulent Anglo-Scottish border begins.

Authors Note: If you like multi-generational families, arranged marriage and slow-burn romance with a bit of extra spice, put A Noble Betrayal on the top of your reading list.

Over and over he struck his brother’s weapon until Hugh finally stepped back and raised both arms. There was a mix of cheers and groans from the men around them in the training yard. Some, no doubt, enjoyed seeing the earl’s eldest son defeat his younger brother. Others knew the reason for Hugh’s too-quick surrender.

Haydn was out of control. Not making deliberate moves to hone his skills. Instead, he was fighting out of anger. Nay, fury. His brother knew it. Their onlookers knew it. But Haydn didn’t care. Rage oozed from every muscle in his body. And if Hugh wouldn’t fight him, he would find someone who would.

“He’s not in the yard today,” Hugh said, apparently discerning his attempt to find their younger brother. “Give it over.” He nodded to Haydn’s sword. “Come walk with me.”

He no more wished to give up his sword than he did to go for a walk. “I’ll pass.” Haydn sheathed his sword, intending to find a new training partner. But Hugh wasn’t having it.

“Either walk with me or I’ll tell Mother you nearly took my head off this morning.”

Hugh’s squire made a face that clearly conveyed his opinion. Haydn ignored him. He had no need for the thoughts of a boy, who’d seen just ten summers.

“I’ll tell her you drew blood refusing to wear armour even with unblunted swords.”

Their mother hated when they trained “so carelessly” and he was sure to get an earful for such a thing. Lady Sara knew they were warriors. Knew the dangers of not training well. But she also disliked when her sons “acted like fools for the sake of a few cheers.” Admittedly, they did have more onlookers when they trained this way.

“There is one problem, brother, with your plan. My sword did not touch you,” he said, now irritated with both his current situation and his brother.

“Ahh, but another’s did.” Hugh raised his shirt. Indeed, an angry new wound stared back at him. Haydn winced. A nasty bugger, and one he should never have incurred in a training yard. His mother would, indeed, be angry.

“I could easily tell Mother the truth. That you attempted to pin your sloppy training, purely for the pleasure of my company.”

“Pleasure.” Hugh snorted. “If I were looking for pleasurable conversation, you would most certainly not be the one I’d seek.”

“And yet, here we are, on the very walk you requested.” As boys, they’d often taken this same walk to the castle wall just behind Kenshire’s training yard, the one that afforded clear views of the North Sea.

“Because you did nearly take my head off back there,” his brother said as they climbed the wooden stairs toward the wall walk.

When they reached the top, the closest guard to them nodded in greeting and moved away, leaving alone the two brothers, who looked more like twins than siblings nearly two years apart. Haydn looked out to the sea before giving his attention back to his brother. Looking at him was like looking in the precious bit of mirror their mother kept inside the master bedroom, despite that they were nearly two years apart in age. Hugh’s clear blue eyes hinted at the seriousness of the subject at hand.

When Hugh grew serious, it meant trouble brewed. And it did.

“He is a right bastard, Hugh.”

“Mother and Father have been loyal subjects their entire lives. How many Kenshire men have lost their lives fighting for him, for his father?” The anger that had dissipated slightly on their walk here returned in full force. When his parents had summoned him to Kenshire from Henham, he’d assumed they wished to question him about his recent visit north. Never could he have imagined the information he’d been about to receive.

Five words that changed his life.

The king insists you marry.

And not just any bride, but the daughter of one of King Edward’s closest advisors.

His father had handed Haydn a missive. “Apparently rumors of Wallace, and Galien’s involvement with him, continue to swirl. A royal courier left just days ago with that.”

Reading it, his new reality took hold. With each word he read, Haydn’s hope for a marriage like his parents’ was dashed. But more importantly, it also confirmed their suspicions. That his family was in the king’s crosshairs. No matter that they’d fought for him many times in the past. His parents’ refusal to send men to Falkirk had been the last straw, it seemed, for the king. In the years since, his extended family had admittedly given Edward cause for suspicion. It seemed Kenshire’s past support meant little now.

He looked now at Hugh who shrugged. Knowing what his brother was thinking, he said, “Don’t.”

“Someone needs to say it,” his brother responded. “I don’t envy your position. But you know it’s time. Past time.”

Haydn turned back to the sea. It was swirling and angry, dangerous for anyone who misjudged its calm waters from earlier in the day. “If you say so.”

“I say so. Mother and Father say so. Everyone knows you have a duty to marry, Haydn. Everyone but you.”

An age-old argument, but one it seemed they would re-visit. Again. “Neither of our parents are ill. Mother held Kenshire in her own right. She could do so again, if needed. And there are four of us, as well.”

“Father will have seen sixty years soon. They will not live forever. Even if you wish it so. And neither will we.”

Haydn hated this topic. “It matters not. The king has solved the problem,” he said bitterly.

Calmer now, courtesy of the training session—and his brother’s temperament, even if Haydn would never admit it to him—he resolved not to allow such a rage to overtake him again. The matter was settled. He could resist it all he wanted, but tomorrow he’d leave for London.

“I will bring Lady Phillipa here for the wedding, install her at Hillstone Manor, and return to Rymerden.”

His brother blinked. “Hillstone? A bit remote, is it not?” he asked.

After Haydn received his spurs, his parents had given him the small, but beautiful, manor house well south of Kenshire. But it was the castle that Edward gave Haydn’s father many years before their falling out, the one the king now threatened to take back, where Haydn resided now. He’d only been to Hillstone on a few occasions. He shrugged. “’Tis safe enough.”

“That was not what I meant.”

Haydn turned toward the stairs. “I am aware of what you meant. But if you believe for a moment I would take Robert Pernell’s daughter to Rymerden, or anywhere where she might spy on our family… The Earl of Sherfield, and by extension his daughter, is not to be trusted.”

“I didn’t suggest it,” his brother clarified. “But have you spoken to Mother about your plan? She will not take kindly to the idea of abandoning your new wife.”

Their mother, the countess of Kenshire in her own right before she married Haydn’s father, would likely not agree with his plan at all. Fierce but kind, protective as he was, Lady Sara also had a penchant for ensuring the women at Kenshire were treated fairly. But if she had a better plan, he would be keen to hear it.

“Given a choice between a wife I do not know, nor could ever trust, and our family, ’tis not a choice at all.” If he included only his parents and siblings as family, they could navigate the king easily enough. But ’twas not so simple. Haydn’s Uncle Bryce had married the sister of an influential clan chief. Their intermarriage, and close familial ties with Clan Kerr, were what made them a target of the English king in the first place. Navigating both had proven to be a challenge, but one that his parents and siblings, as well as Haydn’s extended family, had accepted. Nothing mattered more than family. Not the king. Not whispers of their being Scottish sympathizers. And certainly not the woman he was being forced to marry.