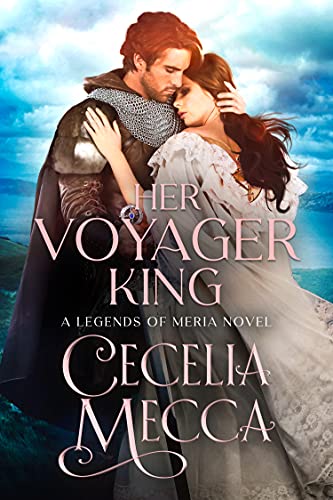 One thing I cannot resist? The wine merchant's daughter.

I am no king, but nor will I forsake those who look to me to save them. With Castle d'Almerita under siege, the capital of Meria surrounded by forces vying to overthrow the man who gave me life, I journey south.

And meet Lilah along the way.

Stowing away aboard her father's merchant ship, en route to a city under siege, Lilah and I find each other once again. This time, I do not mean to let her go. But when the king suggests a plan to end this bloody battle, I must choose between my Voyager ways—taking what I want, including Lilah—and saving the very kingdom I came here to protect.

Fans of The Last Kingdom and Vikings who also enjoy a little HEA in their epic medieval sagas will love Her Voyager King, a standalone romance and final installment in the Kingdoms of Meria series.

“You wished to speak to me, my lord?”

The king’s preference to hold meetings in his bedchamber is not unusual for a nobleman, at least here, in the south. Of all the Merian customs, it is certainly not the most startling. But I would prefer to avoid any kind of intimacy with the man who calls himself my father, including this one.

He sits in an oversized chair by the hearth, its fire blazing as hot as my hatred for this man, even after weeks of being besieged alongside him.

Grinding my teeth at the moniker, one I’ve asked him repeatedly not to use, I do as he bids. When Galfrid leans forward as if to offer me a goblet of wine he plucked from the ornate wooden table next to him, I stop him.

He has asked me to use his given name or even, he ventured once, to call him father. I reminded him my real father, the only one I’ve ever known, the one who raised me, died in battle.

“It is the very best from Sindridge. Let me pour you—”

“What did you wish to speak to me about, my lord?”

Nonplussed that I’ve cut him off and rebuffed his offer, Galfrid relaxes back into his chair. A man known for his stern but thoughtful temperament, he collects himself without comment before continuing.

“I agree with what you said today.”

That surprises me. Since coming here nearly six weeks ago, reluctant to be named heir to a man who only sent for me, his bastard son, when his other son died, we have rarely agreed on anything.

After sailing into a city under siege, the capital of Meria easily able to withstand such an attack courtesy of its position on the sea, I am no less a foreigner today than I was then. Murwood End may be on the same isle as Meria, but the two are nothing alike, a fact I’m reminded of almost daily. My ways, curious to some, are abhorred by others.

Just yesterday a member of Galfrid’s Curia chastised me for lending aid to a kitchen maid. I’d gone to the kitchens having missed the midday meal in favor of extra time in the training yard. When I saw a maid struggling with a heavy pot, I simply assisted her, asking about its contents.

Surely not so grave an offense, offering aid or speaking with the undercooks for an extended period of time. And yet, the incident had been relayed back to the Curia. One of its members, its chancellor, raised concerns that afternoon when we met. The king had not been present, and Vanni, thankfully, stepped in to mitigate the argument that represented all that was different between the other nobles and myself.

“That we can hold out here for months, years even,” Galfrid says now, “does nothing to remind our people that we are able to carry out the necessary duties beyond these castle walls.”

My people hailed from the north. Merians call my friends and neighbors “wild Voyagers” without laws to rule them or a leader to guide them. Both, in fact, are preferable to so many rules and protocols that the very air itself is stifled.

And yet, I suppose these are my people now too. I ensured that the day I agreed to come to Castle d’Almerita, to allow King Galfrid to name me as his successor.

“What of Vanni’s concern?” I ask the king.

Of all the members of the Curia, the one I respect most, the king’s commander, Vanni d’Abella, voiced his dissent the loudest.

“It is a legitimate one,” he agrees. As he tends to do when thinking, Galfrid rubs his black and white-peppered, and always perfectly trimmed, beard. “Which is why I should be the one to do it.”

“Nay,” I object. If anyone will leave the safety of the castle walls to remind the people of Meria that their leaders are both alive and well, it should not be the king. I do not object because of the possibility of Galfrid’s death. This man, the one who sent my mother and me away mere weeks after I was born, has been dead to me for a long time. But he is king.

Vanni had voiced his concern earlier, saying, “Tis madness, needlessly dangerous. You are king, and you, the prince. If either of you were to be captured, or killed, Hinton would claim immediate victory.”

“I will go, as your representative. As your heir. It is I the people do not know and are rightly hesitant to support.”

“You are my heir,” Galfrid says, his voice commanding. “The law is on my side.”

“But Hinton is not,” I remind him. Before I agreed to travel here, to accept my succession to the throne, the king’s nephew had already been plotting against him. From demanding to be named his heir to gathering enough support to boldly attempt to take the crown prematurely, Lord Hinton and his supporters now surround Castle d’Almerita. “Let them see me. Let me speak to the nobles who support you, attempt to sway the ones who do not.”

Most Merians do stand with the king. Some, after being promised land or coin by his nephew, with Lord Hinton. And yet others neither heed the king’s call nor openly fight against him. They wait, watching, ready to support whoever emerges victorious.

“If you are killed,” he starts.

“I will not be.” Tis not a boast, but a fact. I’ve not once been bested in a swordfight in many years, even against the biggest of Voyagers or most skilled men, including the famed Vanni d’Abella. I fought alongside my father, a mercenary and member of the legendary Legion of Ash, men trained to go unnoticed, to fight before their opponents even know they’ve been engaged. The most skilled swordsmen the Isle has ever seen.

“I will take Aiken with me. Surround myself with a retinue unable to be defeated.” I can tell Galfrid will acquiesce, even if he does not agree with my methods.

“Even the most skilled of warriors,” he says quietly, “can be overcome by sheer numbers.”

I stop short of smiling. Something I will not do. Not with this man. “They would have to catch me first, my lord. And that I vow none will do before I make it back here alive. You have my vow.”

If it could be called arrogant to make such a vow, so be it. If the people of Meria are to support me, they need to know I will not cower here, siege or nay.

“Very well. But the future of our kingdom depends on you staying alive, son.”

I let the endearment go, for now, knowing it will do little to comment . . . another trait I’ve learned we have in common, a stubbornness that knows no bounds.

I ignore the sadness in his voice. Tis not my job to see the man happy. It is to save Meria, and that I will do. Not because of the king, but despite him.